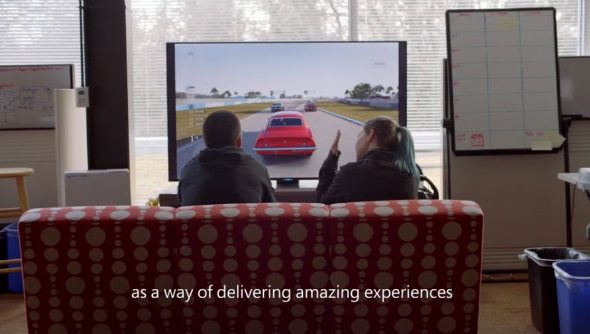 PC could be getting even more Xbox One exclusives in the future thanks to some porting wizardry that I don’t really understand.

At the Microsoft keynote tonight, Phil Spencer showed off a new Windows 10 converter that let him launch the Steam version of Age of Empires 2 as a Windows 10 desktop app. He even had The Witcher 3 running the same way shortly after, although that was just an experiment between Microsoft and CD Projekt Red.

These desktop apps will support distribution through the Windows Store and “any other store”, according to Spencer, who paused slightly after this announcement, probably to make sure Tim Sweeney heard it.

With Windows 10 and Cortana rolling out on Xbox One along with the Windows 10 anniversary update, it looks like Microsoft’s platforms are becoming even more interlinked. Perhaps this is what makes this porting magic possible.

“With the Universal Windows Platform we’re able to drive it at 4K and 60 frames a second, the highest fidelity we’ve ever delivered,” said Chris Tector, senior software architect at Forza developer Turn 10. “The universal aspect that’s a real true promise for us is the ability to write our code once. We’re still going to tailor that experience so that it’s the best thing you can get on Xbox, the best thing you can get on PC.

“But what it means is it’s reduced the development time for us and that really surfaces not only in the code that we write, but also the toolset that we get to use. And that’s the thing that’s going to grow the most over time. Our goal as a first party is to make sure that platform that everyone’s running on is the best one they can deliver games on.”

Creative director Dan Greenawalt added: “The Universal Windows Platform is great for the game developers and gamers alike. It’s going to become even more powerful as a way of delivering amazing experiences across all of the devices in the Windows ecosystem.”

While I couldn’t parse exactly how this works, it certainly seems to point to more Xbox One exclusives heading to PC. If developers only have to write the game’s code once, why not maximise profits by selling it on two platforms? The Forza developers have already said future iterations of the racer will find their way onto PC. My guess is it won’t be long before we get a Gears of War 4 PC announcement.

If cross-buy and cross-network play are also thrown into the mix, the Universal Windows Platform has the potential to blur the lines between console and PC even more. We shall see, I suppose.

Have a watch of the archived stream here.