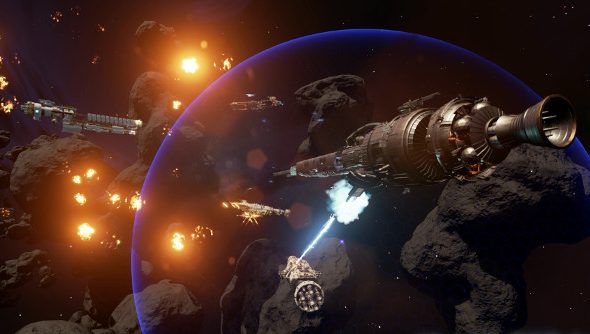 It’s an alluring idea: being Captain Picard or Commander Adama, the steely commander of a warship in battle, snapping out commands as your hulking vessel shoulders its way through the fire and flame to bring god-like firepower to bear.

But then there’s the reality of playing a videogame from that perspective. Where you wrestle with how slow capital ships are, especially the powerful ones. How little reflexes and marksmanship count when you’re firing at targets that are hundreds of meters long and moving along at the same kind of crawl you are. How do you let players live the fantasy without feeling bogged down in the reality?

With Fractured Space, Edge Case games might just have found the balance.

Edge Case CEO James Brooksby and Creative Director Jim Mummery feel like they’re in the right place at the right time. Their previous work as developers at Doublesix was not particularly glamorous, focusing on smaller, digital-only games like Burn, Zombie, Burn. But being among the first studios to focus on the digital market at a time when retail was still king.

“…The world was changing around what people were playing, and what type of games they were going to play, and where they were playing them,” Brooksby said. “At the end of Doublesix we could see the wind changing away from console digital distribution and people going back to the PC.”

So they went to Kickstarter to make the kind of game they wanted to make: Strike Suit Zero, a warmly received space-mecha dogfighter. It showed Brooksby and company that they were on the right track. 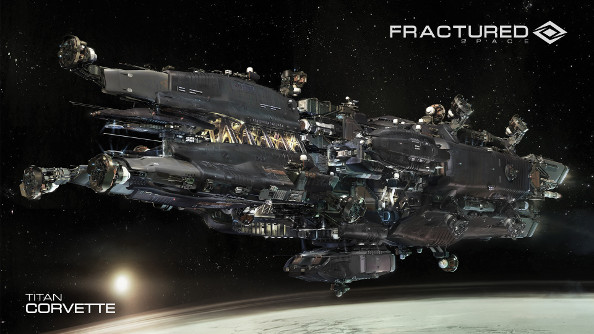 Steady as she goes

Battlestar Galactica is the reference point that Mummery and Brooksby use for what Fractured Space should feel like. You’re not a pilot, you’re a captain.

“It turns from something where you’re commanding a single entity to commanding a large number of systems,” Mummery explained.

It’s important to Fractured Space’s success that the starships feel like starships, not like tanks or fighter planes. Even the fastest and most nimble ships in the arsenal have an inertia to them, while the heaviest ships feel almost painfully sluggish as they heave their way into turns or close with the enemy at the speed of a glacier.

“At one point, we actually sped up the ships, basically to accelerate the process of the game,” admitted Mummery. “So the game would crescendo at the end, and everything became faster and more frantic. But our community were very quick to feed-back and lets us know we’d gone too far with the speed, that it broke the sense of scale.” 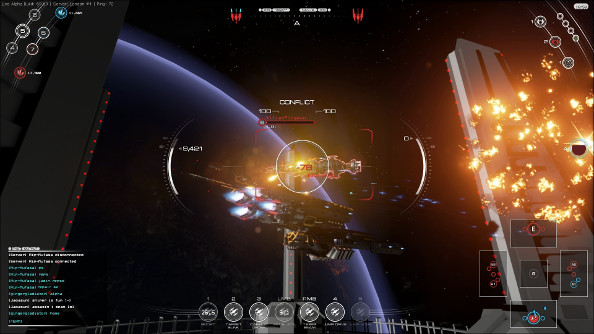 The slow pace was the first thing I noticed when I played Fractured Space this past weekend. While it might discourage players looking for a more frenetic experience, that sense of heft is what gives Fractured Space its identity. It feels exactly the way it should. Capital ships exchange ranging shots across huge swaths of space, slowly drawing closer while harassing each other with missiles and drones. Then the ranges fall to zero and you realize just how big these ships are …and then your screen is awash with flak, cannon fire, and explosions that reminded me of just about every Battlestar vs. Cylon Basestar smackdown. It’s a tremendous feeling.

But it wouldn’t really work if it were just a starship deathmatch. It would devolve into repetitive slugging matches. So Fractured Space borrows some ideas from the traditional MOBA genre while adapting them to its deep-space setting.

“One thing that was really important was that space needs to broken up into rooms, in effect. And the way we did that was to have sectors in play, where people are battling over control of sectors, or areas in sectors,” Brooksby explained.

This solved the old problem of space not really having much in the way of terrain. While there are asteroids and space stations that can break up the emptiness, and provide concealment for assassination-minded players, Fractured Space doesn’t feel cluttered. The real maneuvering is part of those decisions players make about jumping from sector to sector.

It also leads to dramatic moments. Ships are vulnerable when they are preparing to jump, and will take massive damage while getting ready. So you can have those BSG-style moments where a group of beleaguered starships are all just counting down to make their escape while a salvo of killing-blows head their way, only to strike empty space as the targets make good their escape. 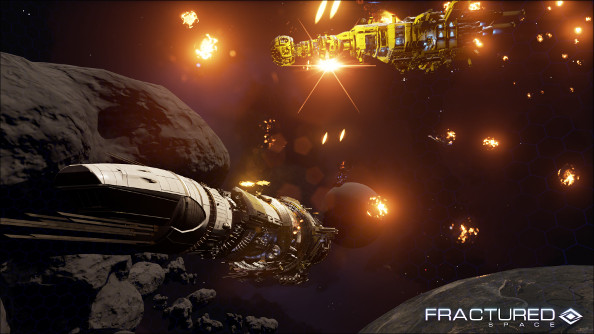 The overall map geography is simple. There are two “laning” sectors where major bases are separated by a series of smaller bases that produce resources for team upgrades. The way the bases are arrayed, both sides have to make a long push up the middle in order to control all the bases and attack the enemy’s base. But once they have it under control, they can jump into the enemy’s home sector and start capturing the other team’s home base. Once it falls, it’s game over.

The central sector serves as the “jungle”, though that’s probably a bit of a misnomer. It’s the jungle and the Baron pit all at once. It is centrally located so players can jump anywhere, which means it’s a good place from which to launch sneak attacks. It also has a gas facility in the center that will provide a significant buff to whichever team controls it. When the gas facility opens up, it’s usually a signal for a huge space battle.

These are familiar rhythms from MOBA games, but Mummery is wary of the comparison.

“MOBA has a very specific meaning, to me anyway. It’s League, it’s Dota, it’s Heroes of the Storm. We’re not quite them,” he explained. “We take some of the brilliant ideas that evolved through those, and especially the ways that Heroes of the Storm has tried to make MOBAs more accessible… And we look at the improvements they’ve made, and we look at the mechanics that they use, and we find ways to make a game reach a crescendo …in a satisfying way. There’s a lot that we’ve borrowed, but comparing us to a MOBA is dangerous. We’re not that thing.”

Brooksby is hoping to incorporate versions of some of his favorite features from Heroes of the Storm into Fractured Space. The game is only 25% complete in terms of features, he thinks, but once the AI is built he wants to add something like mercenary camps to the map, where teams can go engage powerful AI warships, defeat them, and bring them over to their side.

In keeping with the Battlestar theme, the final game will also make extensive use of fighter-craft. While carriers will be the most important fighter platforms, with wings of bombers, interceptors, and drones ready to be committed to battle, most ships in Fractured Space will have some options of their own when it comes to fighter squadrons. But, like in World of Warships, the carrier-class ships will really be playing a very different game from everyone else as they micromanage their squadrons to keep them healthy and break down the enemy’s defenses. Carrier skippers will be playing an RTS while everyone else is playing a more straightforward capital ship game. 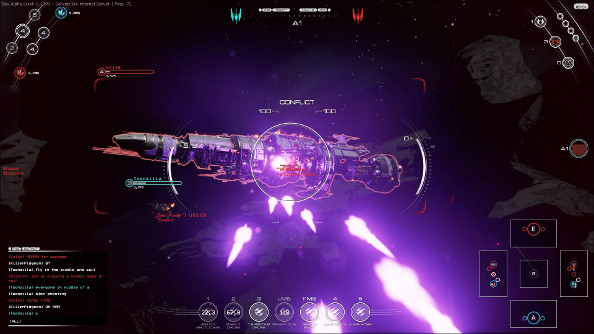 Fractured Space is $10 on Steam Early Access right now, though the final product will be free-to-play. But Early Access is a new thing for Edge Case, and it wasn’t something that many at the old-school development house were really ready for.

“We’re a pretty senior team that have been doing box product for years. So the concept of Early Access was terrifying. And our senior team had to reassure other people it would be fine,” Brooksby admitted.

Before the launch, people were coming up to Brooksby and begging him not to put the game before the public yet. It wasn’t ready. It wasn’t where anyone wanted it to be, it wasn’t even close to being the game that Fractured Space will ultimately become.

But after the launch, Brooksby saw a change come over the studio. The apprehensions melted away. The early Fractured Space players were genuinely excited and helpful. They weren’t just customers, as many of the Edge Case staff had feared, but people who understood what they had let themselves in for and wanted to help Fractured Space become the best possible version of itself.

Fractured Space is still a long way from release. Brooksby and Mummery have a long wish-list that has yet to be fulfilled. There are major questions that have yet to be answered.

But what’s there right now is unique. Fractured Space isn’t a Battlestar skin slapped over a World of Tanks clone. It’s a battleship game that stays true to its subject while still finding the excitement and action of a MOBA. If Fractured Space’s Early Access release is only the foundation, and according to Edge Case it is, then the final product may well be one of the best space combat games ever made.