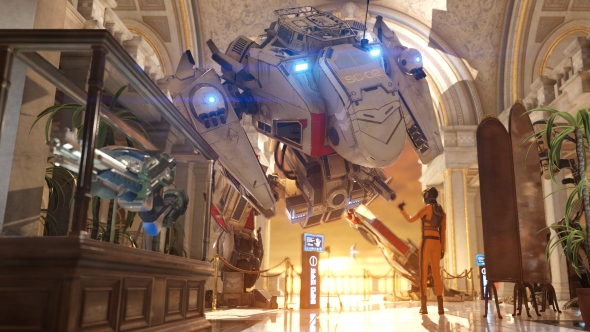 Futuremark are introducing a new 3DMark real-time raytracing benchmark later this year to test Microsoft’s DirectX Raytracing API on your graphics card. And it is going to give your current-gen hardware a serious kicking.

The big tech news coming out of the Game Developers Conference this week has been around the advent of real-time raytracing for games. Nvidia and Microsoft have teamed up to bring about this long sought-after feature, with the big M launching the DirectX Raytracing standard and Nvidia doing their classic, GeForce-only, proprietary thing with RTX acceleration for the Nvidia Volta GPU architecture exclusively.

Futuremark have also been working with Microsoft to show the power of their DXR API, even without the hardware acceleration of Nvidia’s RTX or AMD’s own Radeon Rays tech. Their real-time raytracing tech demo just uses the DirectX 12-based DXR feature, and they have stated that it’s been run in real-time using current GPU hardware.

That said, all of the real-time raytracing demos we’ve seen this week have been run on current GPU hardware, it’s just that GPU hardware has been a $3,000 Volta-based Titan V.

Futuremark have reiterated that the DirectX Raytracing features are likely to only be used for effects such as accurate reflections and enhanced shadows to begin with, and traditional rasterization rendering will continue to dominate. But they do point out that modern GPUs are now capable of still carrying out the rasterization workloads while running small amounts of raytracing on the side.

Current GPUs will be able to run the DirectX 12 compute workloads that make up the bulk of the DirectX Raytracing tasks, but how well they’ll continue to render is still up for debate. But we’ll know by the end of the year as Futuremark are looking to include a DXR-based benchmark in an upcoming 3DMark update.

At the beginning I expect most graphics cards will seriously struggle with the increased demands of raytracing, and it’s going to be fascinating watching the technology and the hardware develop towards the day when real-time raytracing is the de facto standard in game rendering.

But even if your current DX12 graphics card can’t cope with doing both the raytracing and the rasterization of a game, it may still be worth keeping it around when you upgrade your GPU. Future gaming rigs could have old graphics cards sitting next to new ones, acting purely as AI and compute co-processors.