Last month, the organisers of Gamescom announced the 2020 version of the annual videogame trade trade show would “definitely take place digitally”, following the outbreak of COVID-19 around the world. Now, they’ve released more details on what to expect of this year’s digital offering – including dates and news that we’ll see “new shows” and “an
expanded Gamescom” this summer.

That according to a press release on Gamescom’s site (via Geoff Keighley, producer and creator of the Opening Night Live event, on Twitter), which announces “Gamescom 2020 will take place digitally from August 27 to 30”. The event will bring, the organisers reveal, “lots of new shows, a greatly expanded Gamescom Now platform as a content hub for all the latest insights and news, and digital devcom’s wide-ranging program for game developers and other trade visitors, as well as so much more.”

The 2020 event will be comprised of several key “pillar” events, like Gamescom Now, which will be the “first go-to source for all world premieres, news, games, and events”. For example, the Opening Night Live will feature as part of this “hub”.

In addition to the opening show, which kicks off August 27, there will be a new Gamescom: Awesome Indies event featuring announcements and news about the best indie games in the pipeline. Plus, another first – the Gamescom: Daily Show – will explore and expand on all the big things coming out of the show each day.

Are you #up4gamescom? 🔥 Get ready for numerous new shows and known formats from August 27th to August 30th such as #gamescom now and the gamescom: Opening Night Live with host @geoffkeighley! Stay tuned for #gamescom2020: https://t.co/PM2lrnVnFe pic.twitter.com/uRUkfyCPzI

In addition, there’ll be the Gamescom Studio, featuring interviews and updates from key devs, and finally a Gamescom: Best of Show, er, show to round the whole event off. Taking place on August 30, the “new format” closing show will take a look back at this year’s all-digital event and broadcast the presentation of the Gamescom 2020 award. 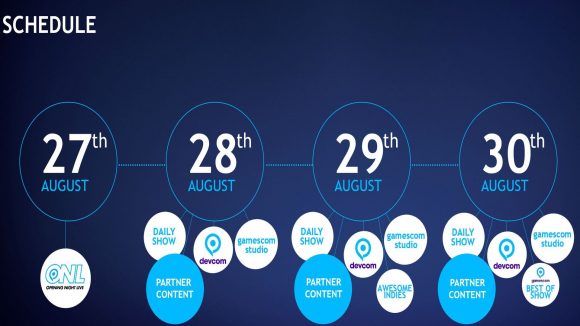 There are no timings to scribble down just yet, but it looks like we’ve got one hefty digital offering to tune into later this summer.

Quick update: @gamescom Opening Night Live will now take place live on August 27 and kick off 3 days of @gamescom 2020. We’re planning a spectacular show that will also be the grand finale of @summergamefest More at https://t.co/KRzKTQeHcs pic.twitter.com/3gVEvG1so7

Check out our list of upcoming PC games if you’re keen to catch up on what’s in the pipeline for the year ahead and beyond.