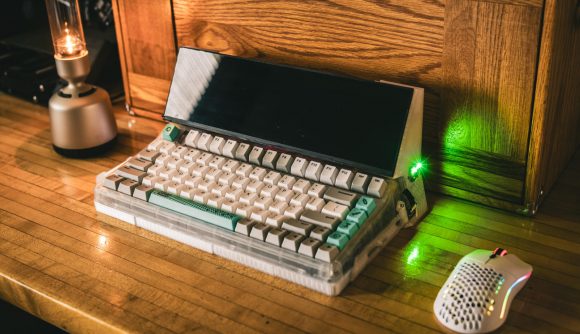 Nowadays, your gaming PC doesn’t have to be a hulking tower that dominates your desk, as there are plenty of alternatives on the market. You can get small form factor PC cases, go handheld with Valve’s Steam Deck, or mod a mechanical keyboard with a laptop motherboard, dedicated graphics, and Windows 11… just because.

Engineer Carter Hurd is known for their weird and wonderful inventions, from a robot made of fungi to the world’s first concrete gaming PC, but the latest creation is as practical as it is wacky. Not only does the chonky gaming keyboard look like a computer concept come to life, it’s something Hurd uses as their main PC, including to play games.

The project is rooted in the CyberDeck, which is a blanket term for a tiny all-in-one device with a foldable screen and – more often than not – a mechanical keyboard. Unlike its predecessor, you can’t close the lid on this hybrid, as it sports a much more rigid typewriter-like appearance, but it does come with the option to add a portable display on top of the built-in ultrawide gaming monitor.

While Framework’s modular components are now available for purchase and would potentially make the process of building this a little smoother, it’s not your everyday mod.

Hurd uses an Iqunix OG80 Wormhole wireless gaming keyboard with TTC Gold Pink mechanical switches as a base, which they describe as “horrible to disassemble.” They then attach it to a custom 3D printed chassis that elevates it just enough to slot in the motherboard and mobile Nvidia GTX 1650 Ti graphics card salvaged from a second-hand $400 HP gaming laptop. Even after chopping the NVMe SSD in half, it still sticks out, requiring another 3D printed attachment to protect it. The rough look with external components popping out gives it a Fallout 4 aesthetic that adds to the charm, but it’s not something you’d see on shelves. 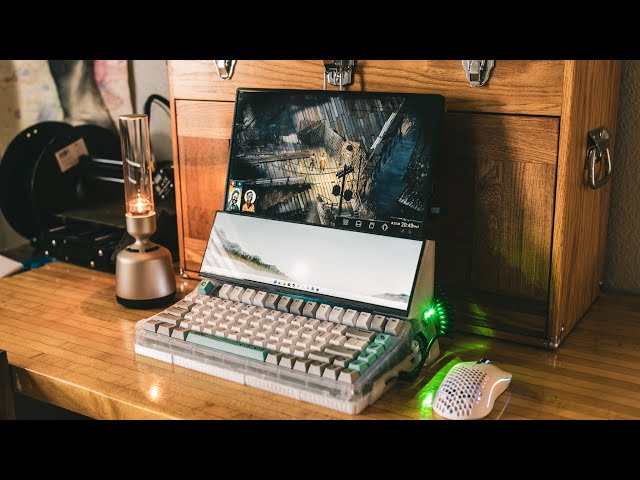 After so much tinkering, adding an RGB PC fan to the processor and flipping the motherboard, Hurd tells us that thermals are consistent with the original laptop and you can expect console-comparable performance in certain games. “My main game is Deep Rock Galactic, and I get around 45fps with that game on high graphics,” Hurd says. “I also play Cyberpunk, but as we all know a 1650 ti is far from ideal with that game. The portable 13-inch monitor is Freesync compatible. I have to put graphics on the lowest settings to keep things smooth.”

For most people, the Asus Zenbook Duo or Asus Zephyrus Duo will serve a similar purpose in letting you peruse Spotify and follow game guides on the second screen without the hassle of building it yourself. That said, there’s a lot of fun in seeing these kinds of concepts come to life, even if they’re one-of-a-kind.