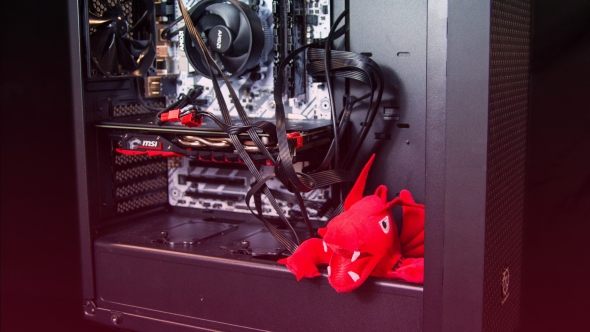 This is a sponsored video courtesy of MSI

Building a PC is easy. We’ve already covered the ins and outs of how to build your first gaming PC, but what if you were under pressure? And what if you’d never even so much as installed a new graphics card before? Well, with the right teacher you’ll have a new PC built in no time. Right? Turns out, no…

If you’re looking to build the best gaming PC check out our guide to the perfect components to use right now.

On Jacob’s team is our deputy editor, and all-round human, Ben Maxwell. He claims to have once built a PC way back in the mists of time, but I suspect when he said ‘PC’ he might have meant “sand-castle.” Especially after seeing how he holds a screwdriver like it’s some sort of distasteful alien probe. A used one.

While on my side I have the [sarcasm] ever enthusiastic [/sarcasm] Alice Ligouri, the host of our Weekend Esc. show and the big cheese channel editor of PCGamesN’s video team. She’s never built a PC before, but has watched me repair and rebuild her office rig enough to know what goes where. Seriously, I’ve no idea how she keeps breaking it…

Those are the teams and the rules are simple.

Jacob and I can offer advice and guide the build, but we’re not allowed to touch or interfere in any other way. All the components must be built into the case (no propping motherboards on boxes and calling it a PC here) and the timer stops as soon as a stable run of Cinebench has been completed. We want to make sure the machine is at least functional after all.

And the results? Well, you can see for yourself. I mean obviously I mostly win so you probably don’t need to watch the end, but you should definitely watch the first half just to see how terrible Jacob is.