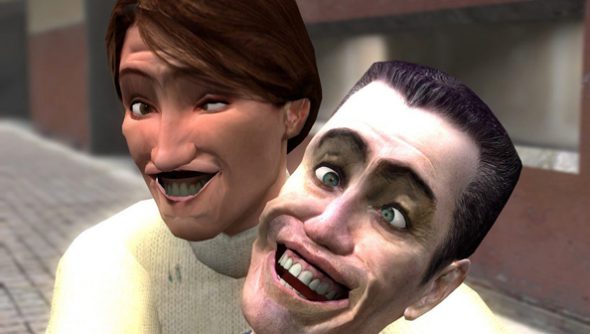 Garry’s Mod, the sandbox puppetry tool which teased the potential out of the Source engine circa Half-Life 2 and made it pull silly faces, has made its creators $22 million since the release of its first Steam build.

“Over 7 years GMod has made about 22 million dollars,” wrote Garry Newman in a Mailbag response on his blog yesterday.

Garry’s Mod’s first (free) release hit on Christmas Eve 2004, and the game has maintained a presence on Steam since 2006, where it currently sells for £5.99.

Key to Gmod’s success are the continual updates developers Facepunch have pushed out throughout its existence – Garry’s Mod updated to v13 last year, and Kinect support arrived in December – and nothing’s set to change about that anytime soon. A Linux version has been in the works for a while, and Facepunch are contemplating a move to Valve’s relatively new SteamPipe delivery system.

Beyond that, though, the two man team are starting work on a new PC game.

“It’s a game I’ve wanted to start work on for ages,” says Garry. “I’m trying to get a team together in office to build it this time.. I don’t really want to talk about it until we’ve got something more solid though.”

Newman said last year that his next game would bear little resemblance to Gmod. What would you lot like it to look like?