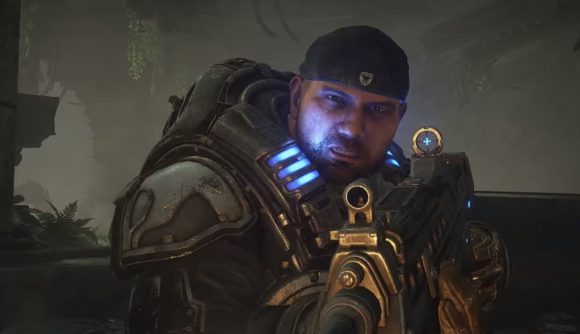 The next two months will bring quite a bit of new content to Gears 5. A familiar face takes over with the New Game+ mode in November, and the shooter game‘s first story DLC is scheduled to arrive in time for Christmas.

Remember back when Gears 5 came out and you could unlock Guardians of the Galaxy star Dave Bautista as a multiplayer skin, voice-work and all? Developer The Coalition has promoted the former WWE champion to being one of the main characters of the single-player campaign. In the upcoming New Game+ mode, you can choose to replace Marcus Fenix with Bautista, with everything plaing out exactly the same, except you’ll have Dave’s dulcet tones providing all of Fenix’s lines. That update comes November 10, as part of the upgrade for next-gen hardware as the Xbox Series X and S hit shelves proper.

On the back of getting to Batista Bomb the main plot, we have a release window for some story DLC, as revealed to IGN. “All I can say is December and the title is Hivebusters,” Zoe Curnoe, Gears 5 principal lead producer, says. “So it might give you a little hint as to what that content might contain.” The Hivebusters are a group that infiltrates Swarm hives who appear in Gears 5’s Escape mode. You’ll be able to customise your team of ‘busters, though the default will be Team Scorpio’s Keegan, Lahni, and Mac, and it’s expected to be around four hours long.

Here’s the video announcing Bautista’s arrival to the campaign:

According to Microsoft, Gears 5 had sold well by this time last year, outselling Gears of War 4. We didn’t love it, but others did, and these updates might help give it the kick it needs.