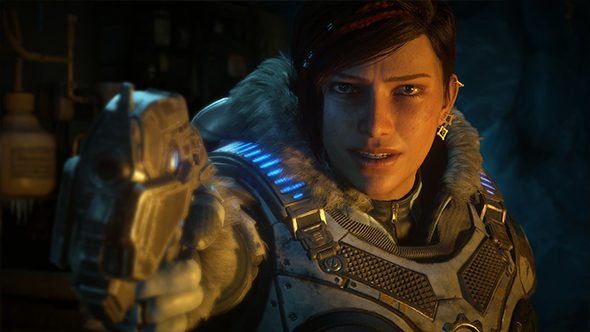 Gears 5 might be dropping the ‘of War’ (probably), but it’s not dropping the reputation of being one of the Xbox brand’s most technically impressive titles. The latest entry in the series looked impressive enough at E3, and the developers have some impressive ambitions for the latest iteration of the engine. Namely, 4K 60 fps on consoles, and naturally much more on PC.

The Coalition studio head Rod Fergusson says that they’re aiming for “60 fps at 4K” on the more powerful Xbox One X console revision. That’s especially notable given Gears of War 4’s performance options on console, which offer either 4K at 30 fps or 1080p at 60 fps – never both. The changes are based on “the learning we’ve taken from Gears 4, and the optimisations we’ve been able to do beyond that.”

Like to live in the future? Here’s all the upcoming PC games you could be playing if only you had a time machine.

Of course, we PC players are accustomed to big resolutions and frame rates, and Fergusson tells Wired that they’re building the game with those options in mind. “Having a game that we’re building from the ground up for PC [means players] will be able to take advantage of all the types of different PC optimisation options you can have. You’ll be able to max it to quite high.

“It’s still reasonably early, but we can usually get to 120fps. It’s obviously going to matter what hardware you’re using to get that – but it’ll be able to scale up that high, [if] the hardware can push it.”