A red stripe of death indicates the territory about to be incinerated by the organic bombs called Nemacysts, and is advancing, turn-by-turn, behind my squad of fleeing soldiers (or ‘Gears’, in Gears of War’s enjoyably absurd military-industrial lexicon).

An evacuation point is in sight when five Locust Drones drop from the sky, reinforcing a lone survivor from a previous wave and blocking my team from safety. Each does an extra 20% damage because of a modifier in effect on this mission. Considering how quickly the Nemacysts are advancing and that my guys have already taken a few hits, I need to massively thin their numbers, this turn, to bring this one home.

Each of my four Gears has three actions, some of which I’ll have to spend fleeing the bombs, and even if you assume that they’ll all land their shots – which they won’t – each drone takes two bursts from their Lancer rifles to bring down. On the face of it, the maths don’t add up. But I give it a crack anyway, and new possibilities unfurl.

When you deplete an enemy’s health in Gears Tactics there’s a decent chance that they’ll be ‘downed’ and collapse to their knees rather than be killed outright. If you can then close to melee range, you can finish them off with a brutal execution, which gives every other member of your squad another action.

Protagonist Gabe Diaz – father of Kait from Gears 5 – manages to down the weakened survivor of the last round, but can’t reach him. My two vanguards – “walking moustache” Sid Redburn, to borrow civilian sniper Mikayla’s unimprovable description, and the gloriously excitable Augustus ‘Cole Train’ Cole – boldly charge right into the centre of the drones’ group and popsicle two of them on their bayonets. Bayonet charges can’t go through cover, so you need to get a flanking position on the target, but if you can pull that off then this manoeuvre traverses huge distances and instantly kills weaker enemies in a single action. This brings Cole close enough to execute Gabe’s victim, and the maths has turned around: I’ve spent four actions to kill three enemies, three of which have been refunded. Bargain.

It’s in moments like this that Gears Tactics shines brightest. In a preview a little while ago, I wrote of its “breathless clutch moments” – hordes of Wretches swarm you in numbers that seem impossible until your team mows them down, protesting their dwindling ammo like shouty grunts from Starship Troopers, all firing simultaneously as the creatures trespass on their overwatch cones.

Releasing either side of the weekend, Gears Tactics and XCOM: Chimera Squad are an interesting pair. Where XCOM spoils you with psionic wizardry and antigravity grenades, lets your agents deploy wall-penetrating lasers and earthshaking rage stomps as they level up, and develops its challenge by layering enemies with many of the same tricks, Gears Tactics is far less charismatic, perhaps due to the grimdark setting (Cole's gleeful whooping notwithstanding). Put aside the bells and whistles, though, and Gears' gameplay is far more exciting at its core.

As daunting as many of its challenges can first appear, developers Splash Damage and The Coalition clearly understand what’s possible in the game they have created. The gulf between your opinion of how many Locusts you can kill in a turn and that of the devs is gradually closed in thrilling little moments of revelation: ‘man, bayonet charge is so useful’, ‘wow, that grenade was perfect,’ or ‘my God, this sniper build is disgustingly lethal.’

The freedom to do whatever you wish with each of your Gears’ three actions per turn is integral to this: getting an action from a skill or an execution opens up a whole range of possibilities, meaning you can get away with much more in a turn than you can in, say, XCOM. (Yes, as another sci-fi squad tactics game that got a new release just before the weekend, expect many more comparisons with the series that breathed new life into this genre.) 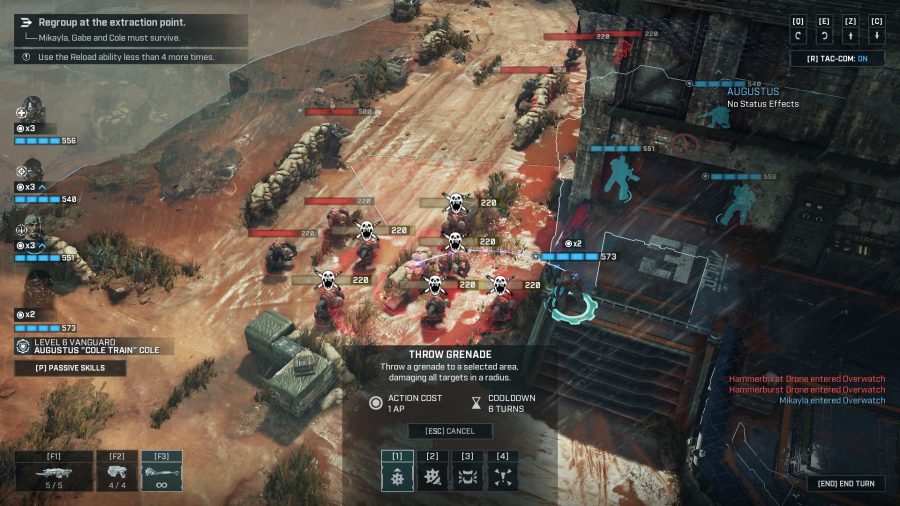 The move to open maps – as opposed to XCOM’s grid-based ones – provides a similar feeling of possibility. XCOM: Chimera Squad just reminded me how frustrating it is to feel like a single grenade should be able to hit an entire group of aliens, only to have its area of effect snap to a grid such that it misses their outer members. By contrast, Gears Tactics’ precise positioning means you’ll often be pleasantly surprised by how many bad guys you can clip and kill with a single frag.

The potential hazards of open maps are navigated superbly – the cursor snaps into a choice of nearby cover with satisfying magnetism to ensure you don’t accidentally leave a unit exposed after ordering them into a melee attack, for instance. In another refreshing tonic after XCOM’s hefty downtime, your foes in Gears Tactics often act simultaneously, meaning their turn is resolved quickly and you never wait too long to get back into the action.

I’d go so far as to say that Gears Tactics’ core gameplay is better than XCOM’s. And yet as the campaign goes on, this rock solid foundation is let down by a lack of embellishment. 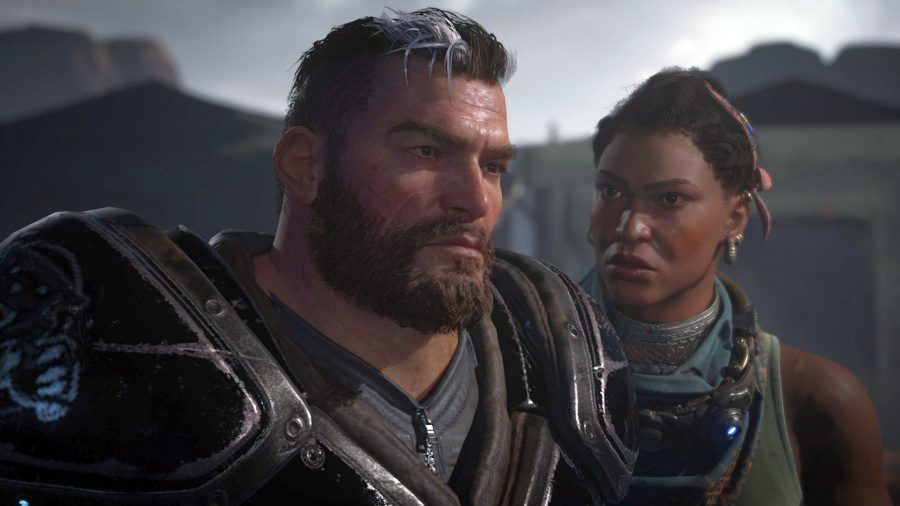 The campaign has three acts, each bookended by story developments with bespoke missions, but what happens in between can be a chore. On several occasions per act the story simply stops while Gabe invents some reason for busywork, at which point you must complete a few side missions to advance to the next chapter. These are presented in a menu, alongside their rewards (loot), their restrictions (you may be limited in the number or class of Gear you can bring), and their modifiers (enemies may get more damage, you may get more mobility, etc).

I get that reuse of assets and procedural generation is common in this genre, but Gears Tactics simply does not have enough variety in its environments, missions, or enemies to keep the campaign feeling fresh. The same mission types on the same maps crop up time and time again: wave defence on a pair of supply crates, rescuing captured Gears from Locust ‘torture pods’, scooping up loot while fleeing an advancing carpet of Nemacyst bombs. By the end of the campaign I was thoroughly exhausted at having to repeat the same experiences to advance the plot. 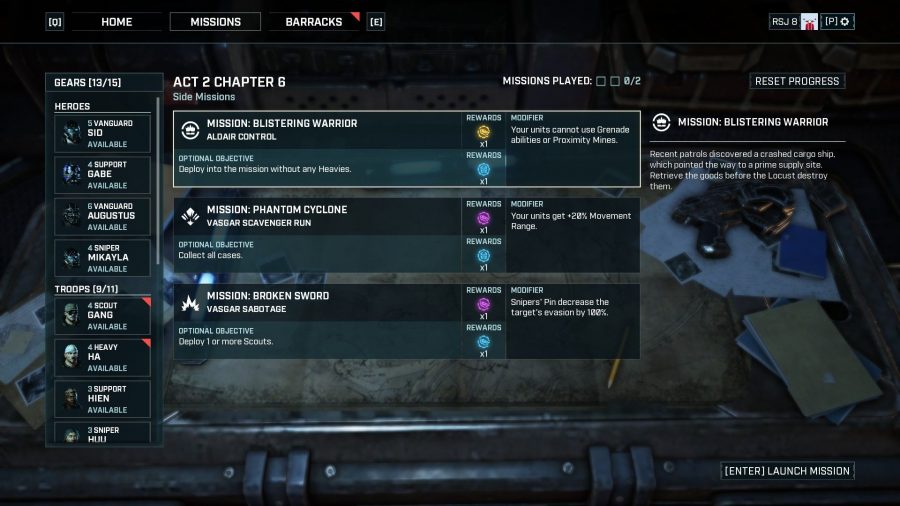 Not that there’s not an awful lot going on in the story, either. A glib but not inaccurate summation might be: there’s a bad guy; you stop him. A couple of twists don’t amount to much and are only interesting for the ripples they make among the three core characters – Gabe, Sid, and Mikayla – who are a very well written and acted trio of bickering, pulpy testosterone junkies. Gabe in particular is excellent: his decency is as palpable as his courage, and he’s convincing in winning the respect of his more jaded comrades.

Enemies do get tougher and more plentiful in response to your own development throughout the game, but once you've seen the grenade-launching Boomers and buffing Kantuses by the middle of Act 2, you've seen more or less everything that asks new questions. Drones eventually upgrade to Disciples, which are tougher and drop a poison cloud. Wretches get a more intelligent suicide bomber variant in the Ticker. Kantuses get angrier as Zealots. But none really forces a change in tactics.

Splitting the difference between XCOM: Chimera Squad and its main sequence forebears, Gears Tactics enables you to use these pre-written ‘hero’ characters as well as randomly generated Gears recruited from nowhere. It doesn’t quite work. The three main heroes are required for many of the story missions, so you’re hobbling yourself if you neglect their development in favour of randoms. Why bother training a random, then? Again, because the game requires you to do so: each character can only complete one side mission per chapter, and the plot will also lock certain characters at other times. You can never bring more than four Gears on a mission, so randoms don’t get much chance to breathe. You also get regular opportunities to recruit new ones at levels that are pretty close to your squad; even the randoms I did use regularly were outstripped by the ones I rescued. So though they’re allowed to die – unlike the heroes – you won’t really care if they do.

You get five character classes (Support, Vanguard, Sniper, Heavy, and Scout), each of which has a web of skills with four subclass branches. You can spend a maximum of 18 points unlocking nodes in these webs – enough to follow two branches almost to their end – and you do so on a freeform basis. Together with the game’s loot, this affords you a ton of different build opportunities for your Gears. 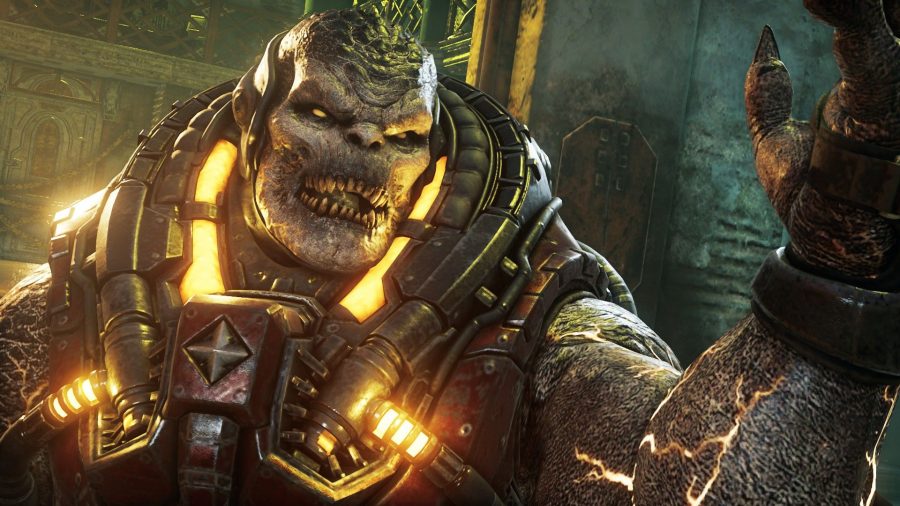 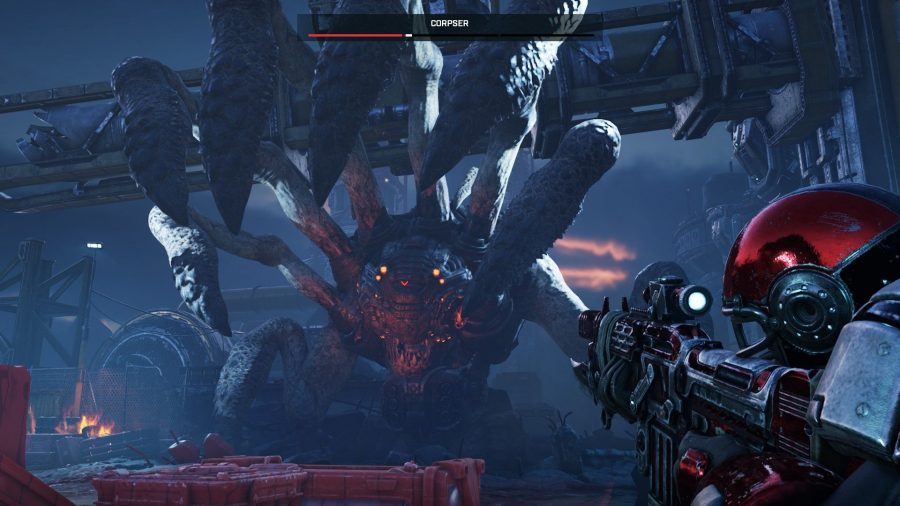 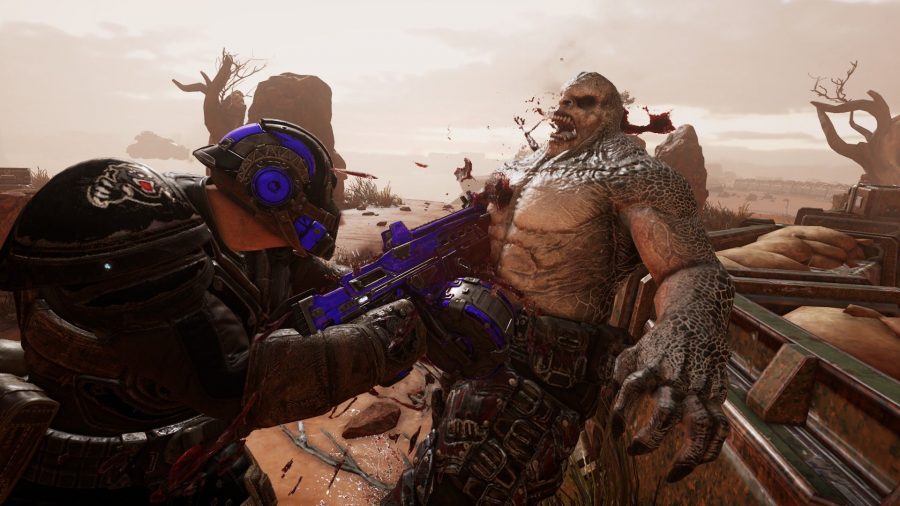 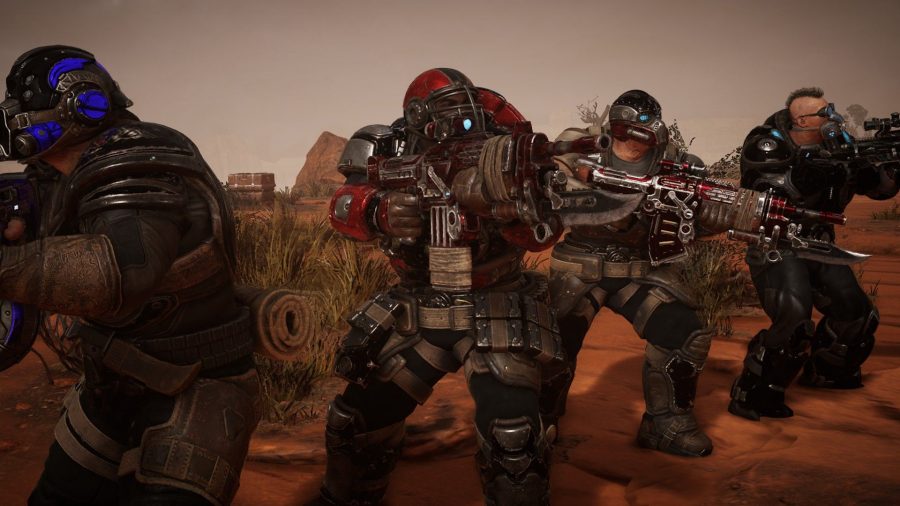 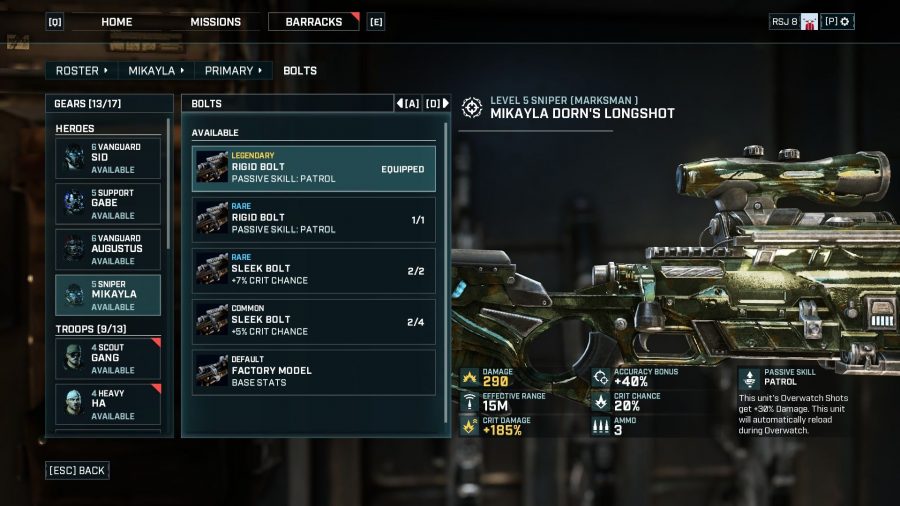 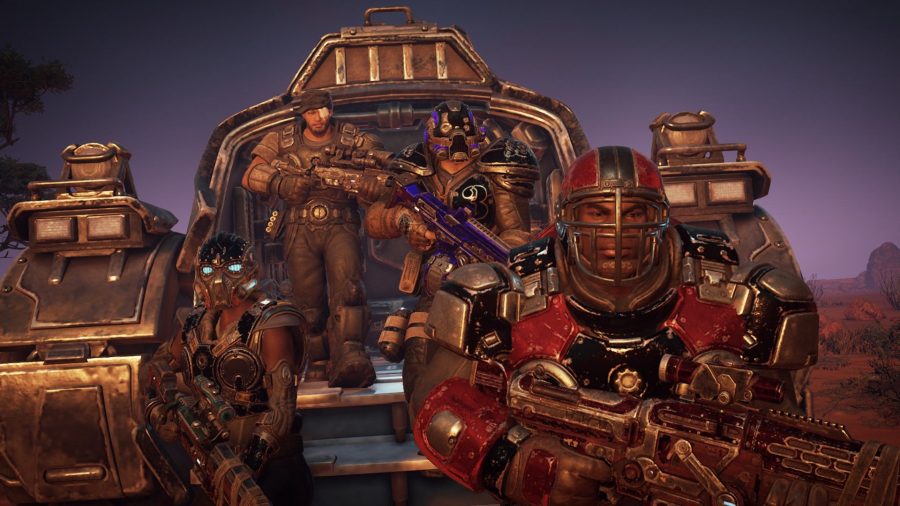 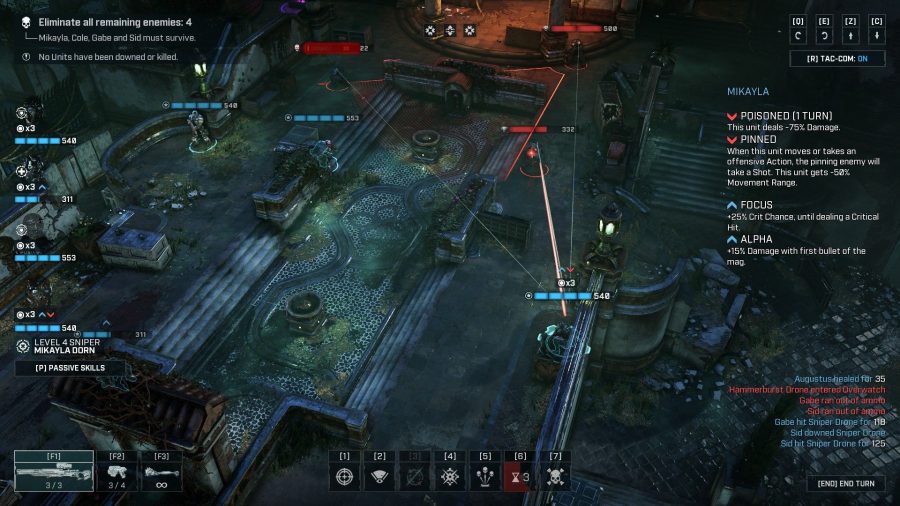 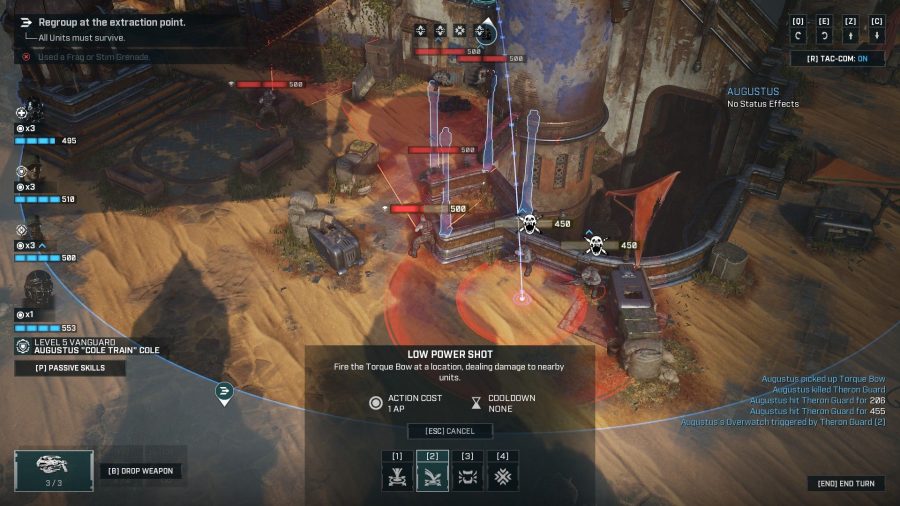 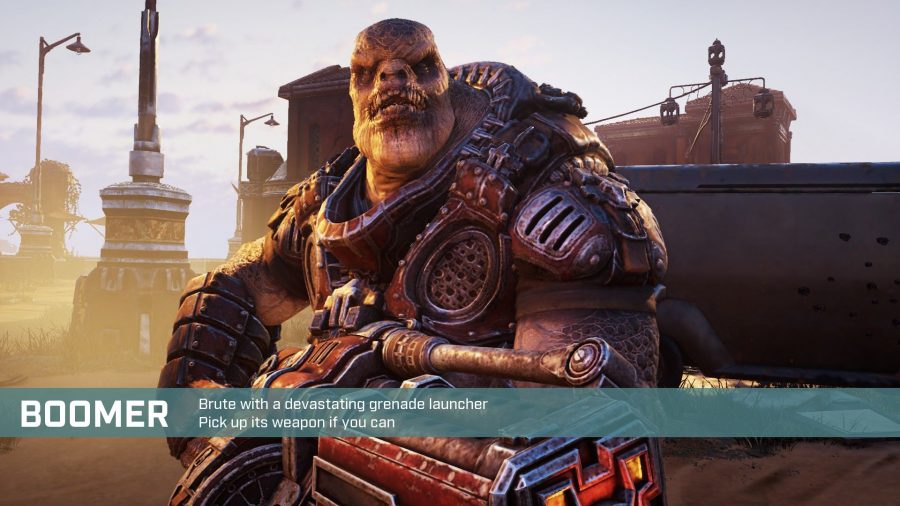 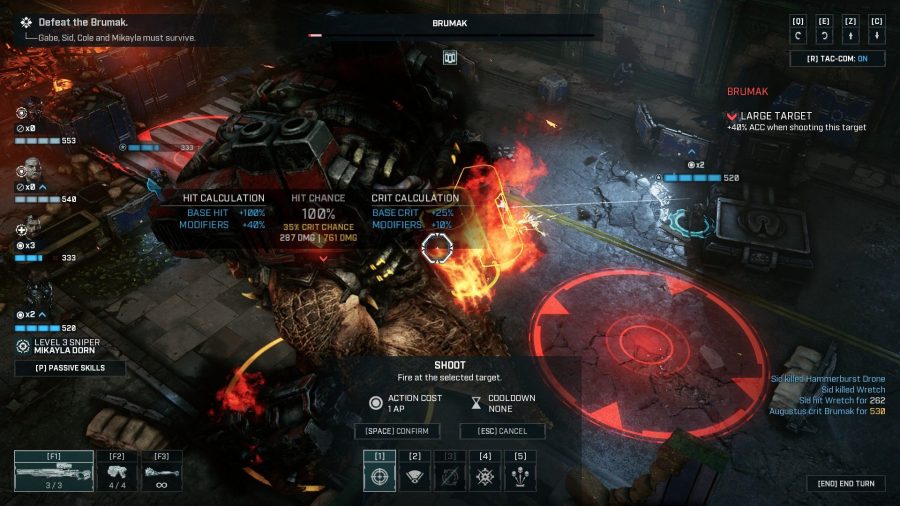 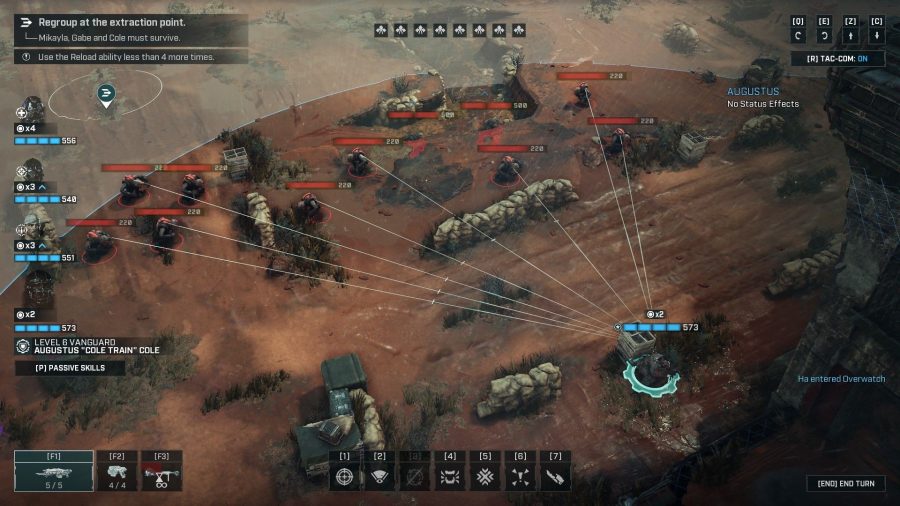 I have a sniper whose skills and gear refresh one another’s cooldowns and grant bonus actions, enabling him to make an extraordinary number of kills every turn. I’ve built Cole into a stabby lunatic: when he makes a bayonet kill, he gets an action refunded, and nearby enemies suffer a range of debuffs. I’ll manoeuvre him to initiate every fight and even if I don’t kill all opponents that same round, they’re usually so scared that their counterattack is ineffective.

There’s loads of potential here that theorycrafters will relish, though the deluge of loot can become overwhelming, and you can lose sight of your plans in a haze of numbers. Most nodes on the skill web improve previous abilities by adding percentages or reducing cooldowns and such, whereas leveling up in XCOM – to return to the most obvious competitor – generally means unlocking a whole new ability, or upgrading an existing one with significant new functionality. Promotions in Gears Tactics also slow down dramatically after you pass level four or so, making development feel less exciting and further weakening any incentive to diversify your squad.

Asked about the lack of features such as multiplayer or a strategy layer, the devs told us it was “a matter of focus,” and while I never thought I’d accuse a Microsoft game of wanting investment, too much of Gears Tactics’ campaign feels like filler – the same recycled missions and maps, with no meaningful bearing on a very simple story. The core gameplay is wonderful, but it stretches thin across 25 hours of almost monotonous missions. It’s a shame, because given a little more ambition and variety, Gears Tactics would be something truly special.

Its core combat is probably better than XCOM's. If only it did a little more with it, Gears Tactics would be one of the greats.