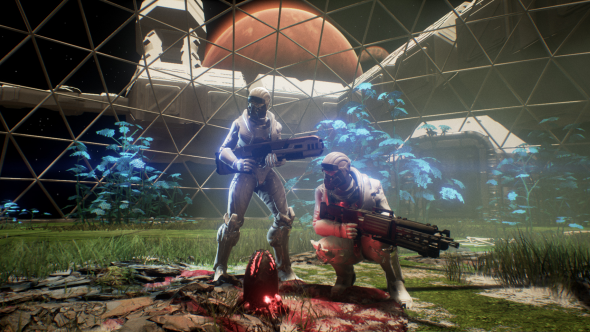 The main draw of Genesis Alpha One is that you can both build space stations in a top-down perspective and run around them in first-person with a big gun. The premise has clearly intrigued Team17, who are putting it out on their publishing label – the same that’s produced some bold new games in the past.

But will Genesis Alpha One be a breakthrough smash like The Escapists or a brave failure like Beyond Eyes? Take a look at the new trailer and see if you can figure it out.

Genesis Alpha One is made by a German indie called Radiation Blue, who’re putting together their heady mix of FPS, base-builder, and roguelike in Unreal Engine 4.

Today’s trailer introduces IDA, the artificial intelligence who’ll guide the player, and the USS Genesis, in finding a new home for humanity’s DNA. Earth’s no good anymore, apparently, after years of war and pollution.

There’s no release date for Genesis Alpha One yet, but it is confirmed for the PC.