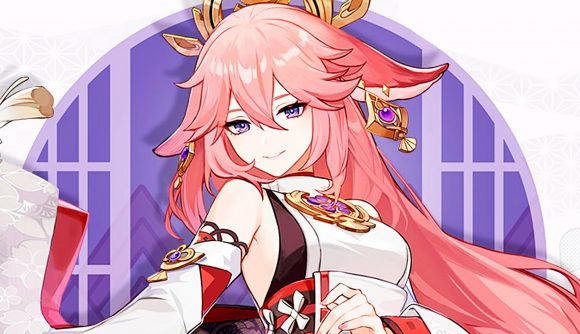 Genshin Impact’s current round of fresh content is drawing to a close. We got a new area called Enkanomiya and two more characters – Shenhe and Yun Jin, if you missed them. Now, though, it’s time to look towards what’s next. Mihoyo has revealed that it’s hosting a livestream to dip into Genshin Impact’s next update.

The devs have kept their cards close to their chest regarding what we’ll see, though we have a few titbits to keep us going. The developer revealed a new character called Yae Miko to round out 2021. She’s the Grand Narukami Shrine’s head shrine maiden and a “descendant of Kitsune lineage”. When not serving as a religious figure, though, she busies herself as the “intimidating” editor-in-chief of Yae Publishing House, which publishes light novels. Mihoyo typically teases characters one patch before they’re set to arrive, though we also see Yae Miko in the art for the upcoming livestream. Basically, it looks like there’s a good chance Yae Miko will have a banner in update 2.5.

The devs have also just revealed Kamisato Ayato – a hydro character who is the head of the Kamisato Clan. If you think his name is oddly similar to Ayaka, that’s because they’re siblings.

Genshin Impact’s 2.5 livestream begins on February 4 at 4am PST / 7am EST / 12pm GMT. As always, the stream will be hosted on the developer’s Twitch channel when the time comes, though you may want to shuffle in a few minutes early to make sure you don’t miss anything. You’re getting something extra this time, too, as Mihoyo is streaming a concert once the reveal is over.

The special program for Genshin Impact's new version will premiere on the official Twitch channel on 02/04/2022 at 07:00 AM (UTC-5), followed by an online concert, bringing you a joyous time with beautiful melodies!

As ever, there are datamines about. According to Project Celestia, we’re getting a bartending minigame event called Of Drink A-Dreaming. Basically, you mix drinks to unlock unique dialogue options for certain characters like Shenhe, Eula, Jean, and more. Keep in mind, though, that this information isn’t confirmed and could be subject to change. Either way, we’ll see what’s new soon enough.

We don’t have a Genshin Impact 2.5 update release date just yet, though it’s likely to fall on February 16 if Mihoyo sticks to its typical six-week update schedule.