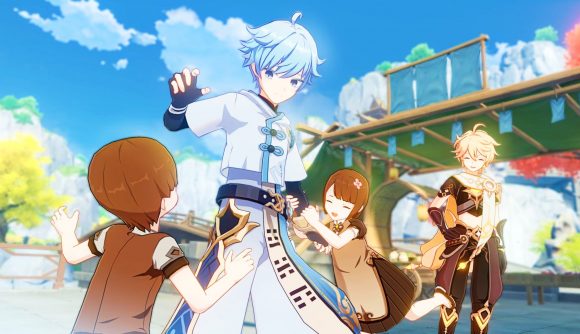 Genshin Impact has been going strong for over six months now, but we’ve yet to see the culmination of its main quest. The anime game gets an update every six weeks or so that offers plenty to distract you in the meantime, but today we’ve got a new chapter in the Archon quest as part of update 1.4, Invitation of Windblume’s second stage.

Archon Quest Chapter I: Act IV – We Will Be Reunited takes us back to the Abyss Order storyline, with the last one featuring the Fatui as the big bad. The latest tale is set in motion when Ganyu and Lan tell you that the Treasure Hoarders of Mondstadt and Liyue are coming together to do something with ruins associated with the Abyss Order.

To play this one, you’ll need to be Adventure Rank 36 or above. You’ll also need to have the Lupus Minor Chapter: Act I – The Meaning of Lupical and Chapter I: Act IV (Prelude) – Bough Keeper: Dainsleif quests wrapped up. The quest went live at 4am BST on the European server, so it should just about be available for everyone by now.

If you haven’t been keeping up with Genshin Impact’s long and winding storyline, the whole thing kicks into gear with you and your sibling fighting an unknown force. It doesn’t go well, and the two of you become separated as you’re flung off to a strange land. You adventure through Teyvat, looking for answers only to stop and help out the locals here and there.

If you’re looking to blitz through it, our Genshin Impact tier list will help you pick out an effective team. We don’t have a Genshin Impact 1.5 release date yet, but details are starting to trickle out, so we’ve rounded them all up for you – because we’re lovely like that.