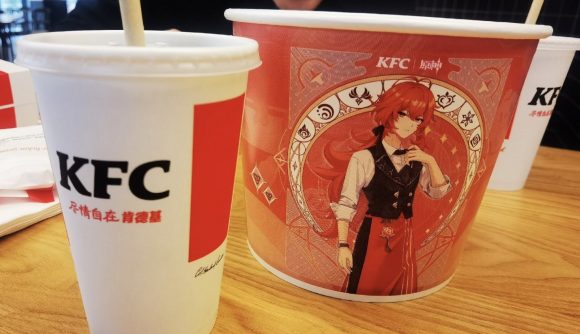 Genshin Impact is huge – huge enough to be getting the ‘promotional fast food tie-in’ treatment. Chinese KFC locations are offering a variety of Genshin Impact-related goodies with your purchase, including pins featuring the RPG game’s Noelle and Diluc. To get a pin, however, you have to shout at hapless KFC employees, and, well, things are getting weird.

The promotion has been going on for a bit now, and the in-game bonuses (like a unique glider, which will eventually be made available worldwide) have been reason enough to grab some extra chicken. But this weekend, the promotion also includes a pair of collectable pins, and players are already lining up to be the first to get them.

The lines have apparently gotten so large that the police have been called in to break up the crowds, in compliance with lingering COVID restrictions. And, well, this image of a Noelle standee being carried away under the flashing lights of a police siren will haunt me until the day I die.

As Asian game market analyst Daniel Ahmad explains on Twitter, “To get the KFC themed Diluc and Noelle pins you must go up to a KFC employee in store and loudly say ‘meet in another world, enjoy delicious food’. Then you will be given the pin with your meal.”

There was so many people at some of the KFC's that the police was called, in Shanghai and Hangzhou, and the crowds were dispersed due to pandemic prevention regulations.

Although it should be noted there is hardly any case in China these days. pic.twitter.com/yr1aRojdFz

Some players have jumped the gun on getting the pins, but are still taking the ‘loudly say’ part very seriously.

I guess I will throw in this bonus video of a weeb getting everyone in line to say "Meet in another world, Enjoy delicious food", which is the line you have to say to the KFC employee to get the pin badge. pic.twitter.com/arLEUvGOnb

This isn’t the first time KFC China has gotten in on gaming promotions. Remember FFXIV’s Black Fat Chocobo? Fried chicken and online games are a heck of a combination.