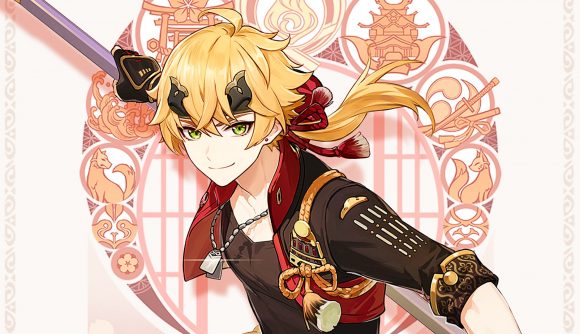 Genshin Impact‘s 2.1 update may have only launched this week, but dataminers are wasting no time digging into what’s coming in the next content release. While there are many unconfirmed details to sift through, most relate to a character called Thoma.

We first caught wind of the Kamisato Clan’s housekeeper back in Genshin Impact’s 2.0 livestream, with heaps of new Genshin Impact characters introduced to give us a sense of who would be joining the game through its story and upcoming banners. Just before update 2.1 was released, Mihoyo also teased some more details about Thoma – he’s very social, in case you are wondering.

Genshin Impact dataminer Dimbreath has posted a heap of new information on Thoma on Twitter. Alongside his attack animations, we also have details on his talents, passives, and constellations. The pyro spear user can deliver stinging AoE attacks while putting a flame barrier to mitigate incoming damage. Outside of shield and damage boosting talents, having Thoma in your party will also give you a higher chance of scoring a double catch while fishing. None of this is confirmed right now, and it could all be subject to change before a final release – it does reportedly come from a beta, after all.

Elsewhere, it looks like Genshin Impact is getting an Osu-style music event in the future. According to Genshin Intel on Twitter, this one involves playing an instrument gifted to you by Kazuha alongside another character in specific locations. It also looks like you’re getting the option of three difficulties if you’re looking to master it.

We’ll have to wait and see if this comes to pass, but there’s plenty to be getting on within the game’s latest update. Genshin Impact has recently got fishing – as all good games should – so we’ve put together all the best Genshin Impact fishing locations for you to check out. Is there a better way to pass the time while you wait for the next update?