Looking for more information about the new characters coming to Genshin Impact? Since its release in 2020, the addictive anime game has seen plenty of regular updates expanding on the game’s content – and adding several new characters by way of limited time banners.

Yae Miko is the next new character to arrive in the Genshin Impact 2.5 update, but there are also a few leaks and some datamined information concerning new characters that may appear in future Genshin Impact updates and beyond. However, until they’re officially announced, these characters are not final and may be subject to changes.

The new and upcoming Genshin Impact characters are:

Yun Jin is a Geo Polearm user, and a famous opera singer and playwright who works at the Heyu Tea House. She uses her stage fighting training to complement her fighting skills. Utilise the best Genshin Impact Yun Jin build to get the most out of this support character.

Shenhe is the Cloud Retainer’s disciple, unaccustomed to life in the mortal realm. Check out our best Genshin Impact Shenhe build to see how you should build this Cryo polearm user. 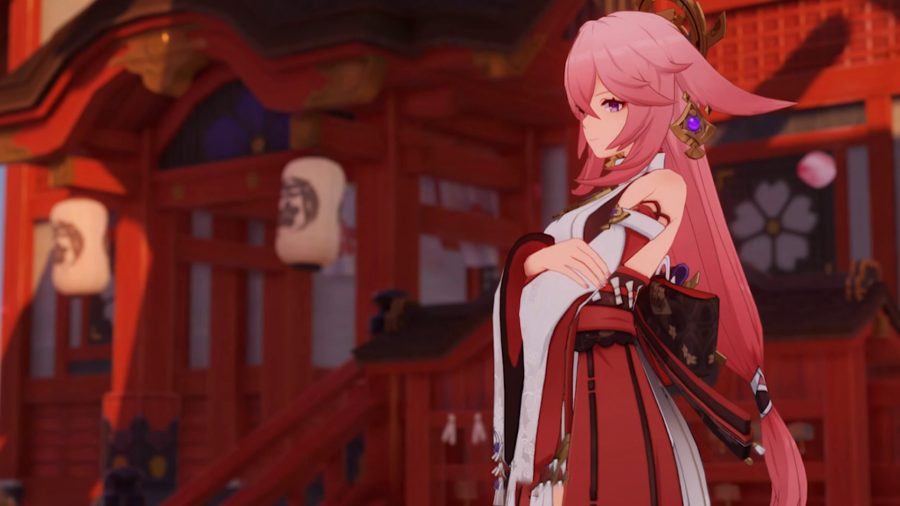 Genshin Impact new characters in 2.5 and beyond

Yae Miko is the priest in charge of the Grand Narukami Shrine in Inazuma – and also the editor of Yae Publishing House. She’s an Electro catalyst user with fox-like ears, hinting at her kitsune heritage. Yae Miko meets the Traveler several times throughout the Inazuma story. We expect her to become playable in the Genshin Impact 2.5 update – we’ve got a Yae Miko materials guide to help you prepare.

Twitter user Dimbreath found references to a character called Yelan in the game files, using the ‘lady’ character model type. Yelan seems to be a bow user, but we don’t have any other information on her yet.

Heizou, the Inazuman detective, is mentioned in several characters’ voice lines. References to Heizou have been found in the game files, and Ubatcha on Twitter reports that Heizou may be a 4-star character releasing as part of the 2.6 update.

Ayato is Ayaka‘s older brother, the head of the Kamisato Clan and the Yashiro Commissioner. He is featured in several voice lines from Inazuman characters, including Raiden Shogun, Sayu, and Ayaka. References to his character model have been found in the game files, but other than this, there is no concrete evidence of Ayato’s upcoming release. According to Nobumori, he is adept at using swords and polearms.

Dainsleif, the Bough Keeper, was officially announced by Mihoyo during the Tokyo Game Show – however, no release date was attached. His voice actor has been announced, but we have no indication of when he might arrive.

Dainsleif is from Khaenri’ah, an underground realm that is not part of Teyvat itself – so perhaps one day in the future we’ll meet Dainsleif when we explore his homeland.

Yaoyao is an adorable NPC who is mentioned in several characters’ voice lines. She was previously Xiangling’s junior when they both studied under the same master chef, but has now become an assistant for Genshin Impact Ganyu.

She features in the official art above, which may also give us a few hints on when she might join us in-game. The art depicts Yaoyao with Qiqi at the Mid-Autumn Festival – so her release may coincide with a festival of some kind. She’s been datamined as a four-star Dendro Catalyst user, which is intriguing, as we don’t currently have any Dendro users available yet.

Baizhu is a Genshin Impact NPC, and is the owner of Bubu Pharmacy in Liyue. He possesses a Dendro vision, which has led fans to believe that he may one day be a playable character – though we’ll have to wait for the full implementation of Dendro into the elemental reactions chart.

Cyno was revealed in the Teyvat chapter storyline preview video – he’s a Polearm wielder from Sumeru, one of the future Genshin Impact regions we’ll be visiting in later updates.

Collei is a character from Sumeru in the Genshin Impact official manga. She was imbued with Archon residue by the seer Barnabus, but was aided by Cyno and Amber to suppress it. References to a Collei Elemental Burst power were found in the 2.5 beta by Twitter user Dimbreath.

Lyney and Lynette were revealed in the same storyline preview video – they’re a pair of twins, presumably, who are dressed like magicians – they hail from Fontaine, a region inspired by France. There’s speculation that they could be recruited as a pair and can switch places with one another in battle – though that may be nothing more than a cool idea.

Iansan was also revealed in the Teyvat Chapter Storyline video, in the Natlan section. We believe she’s a Pyro user, but we’ll have to wait until we visit Natlan to find out more about her.

Scaramouche is No. 6 of the Fatui’s Eleven Harbingers; he introduces himself as a ‘vagrant from Inazuma’ who attempts to betray and kill the Traveller during the Unreconciled Stars event: Star of Destiny. Players believe that he will eventually be a playable character, and speculate that he may be a Electro Catalyst user.

Il Dottore is another of the Eleven Harbingers. His name means ‘The Doctor’, but based on his appearance in the official manga, he’s more interested in using people for research and experimentation.

Pulcinella is the 5th of the Eleven Fatui Harbingers – all that is known about them is that they conscripted Tartaglia into the Fatui after he re-emerged from the Abyss.