Looking for a Genshin Impact Windtrace event guide? For the unfamiliar, Windtrace is essentially a Prop Hunt minigame in Mihoyo’s adorable anime game. During this limited time event, players attempt to evade detection by skilfully disguising themselves as items attempting to blend in to the scenery – with the exception of one player who is tasked with scouring the area for anything suspicious.

The Windtrace event first appeared in May 2021 as part of the 1.5 update, and proved to be highly popular, so we’re glad to see it return in the 2.4 update. However, if you’re thinking of using Mona or Ayaka’s unique sprint ability to temporarily turn invisible, you’re out of luck, as Mihoyo has disabled these in the 2.4 version of Windtrace.

You must be Adventure Rank 20 or above to play Windtrace. Additionally, every Windtrace match takes place in a randomly selected ‘contested zone’. You can only play in zones where you’ve unlocked the corresponding Statue of the Seven. Therefore, to access all the Inazuma contested zones, you must complete the Archon quest ‘Ritou Escape Plan’ and unlock the relevant statues across Inazuma.

To start a Windtrace game, speak to Gygax in Mondstadt. In every match, you’ll be assigned one of two possible roles: either one of three rebels who must hide and evade detection, or the hunter who is tasked with finding all the hidden rebels before time runs out.

Before you enter the match, select your Windward Arts – these Windtrace-specific abilities replace your normal attack, Elemental Skill, and Elemental Burst with special abilities to help you hide from or find your fellow players. As a rebel, use your Elemental Skill to disguise yourself as a random object in order to attempt to blend in with your surroundings. The hunter’s Elemental Skill allows them to capture the rebels they discover. 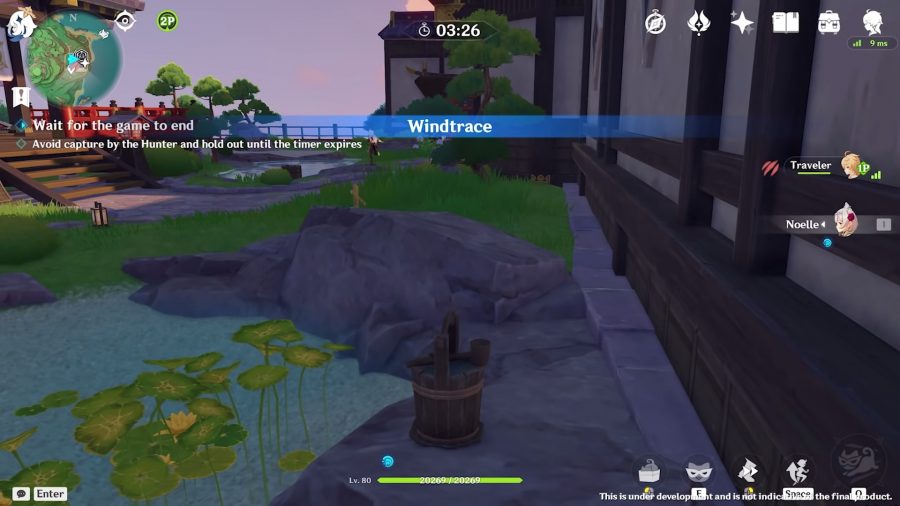 How to get Windtrace coins

Windtrace coins can only be obtained from randomised matches – you can’t earn them from co-op games. Coins are rewarded based on your performance in the match; as a hunter, you gain coins for each victory you achieve and every rebel you capture, with a speed bonus for every second you spend ahead of the benchmark. As a rebel, you earn points for winning, and a bonus for each second you spend free.

You can also earn additional coins as either role by picking up favour, and unlocking performance-based achievements in a match.

You can’t spend Windtrace coins on anything. Instead, rewards are given based on the total number of coins you’ve acquired. There is a daily Windtrace coin cap, starting at 1,200 coins on the first day of the event, and gradually increasing to the maximum of 6,000 on day six.

To help you win as many games (and Windtrace coins) as possible, here are a few helpful tips:

Now it’s time to test your sneaking and sleuthing skills in the Windtrace event. If you’re curious about all the Genshin Impact upcoming events in future updates, check out our Genshin Impact 2.5 guide for the latest information from the beta.