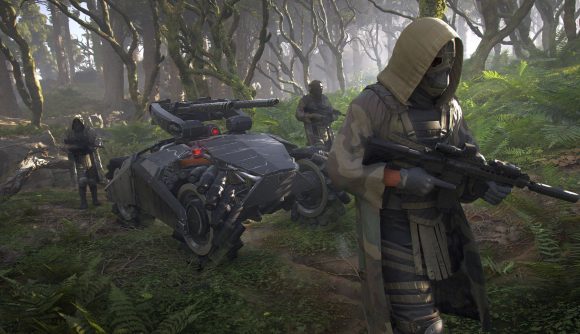 Depending on how you felt about your AI squadmates and their occasional bouts of clumsiness in Ghost Recon Wildlands, it was nice to have some company when raiding sicario hideouts across Bolivia. However, if you plan on playing Ghost Recon Breakpoint single-player, then Ubisoft has confirmed that you won’t have any human AI squadmates backing you up.

Instead, your Breakpoint character will have a drone to help pull off feats like Sync Shots, in addition to other new gameplay features. The reason for this is all in Ghost Recon Breakpoint’s premise, which casts you as a lone Ghost who has crashlanded into enemy territory, and has no line of communication to HQ.

“Secondly, with the story here [in Breakpoint], you’re stranded alone behind enemy lines, so we really want players to be able to dive into this fantasy. But we also offer the mechanics so that the game is fully playable in solo and co-op. Those who want to have the solo experience can, and players who want to have the four-player co-op experience can as well – we just want to offer as much variation as possible.”

Curiously, when you play online co-op you can have three human comrades, so we asked how that was explained in the game’s story. “When you do originally crash land on the island you come in on one of four choppers,” explains Lead dev test Sebastien Leprestre, “[so] for the narrative’s sake there are more survivors in the other choppers.”

It’s still not clear how much the player’s solitary drone will be able to compensate for solo players no longer having three AI companions, but it certainly seems like playing Ghost Recon Breakpoint single-player will be a more solitary experience.