The original Gigabyte Aero 15 was a little ray of sunshine in a world filled with massive, bloated gaming laptops, and nearly two years later there is still a lot to love about Gigabyte’s diminutive machine. Not a lot has really changed on the outside since that first machine crossed my desk – which is a definite plus – but the release of a new range of mobile Nvidia GPUs has given the Taiwanese PC giant a chance to refresh its Aero range.

And so here we have the Gigabyte Aero 15 X9, a GTX 2070 Max-Q gaming laptop with a Core i9 processor at its heart. Unfortunately, for the laptop crowd, the i9 designation doesn’t mean the same thing it does on the desktop – this is no eight-core Ryzen-bait. The i9 8950HK is a relatively standard six-core, 12-thread CPU, but with a higher base and boost clock compared with the Core i7 alternative.

But it’s the Nvidia RTX 2070 Max-Q graphics silicon which is the reason behind the latest Aero 15 refresh, and means Gigabyte is now shipping its slimline gaming machine with the potential for real-time ray tracing. Right now there are only two games capable of taking advantage of either the ray tracing or the AI-powered DLSS features, but support is only set to grow. Surely.

This $3,000 (£3,280) version of Aero 15 X9 is the top of the Gigabyte tech tree and so comes packed to the gills with the latest hardware. Yes, this laptop has gills. But it can’t survive underwater, please don’t try that. Okay, they’re more vents than gills. Whatever.

Read more: The best gaming mouse you can buy today

Alongside the RTX 2070 Max-Q design GPU and Intel Core i9 8950HK CPU, Gigabyte has filled the Aero 15 X9 with 32GB of DDR4 memory. And thankfully it has seen the error of its ways and is filling both memory channels, rather than starting with a single stick of RAM, leaving the upgrade option open, and halving the memory bandwidth. 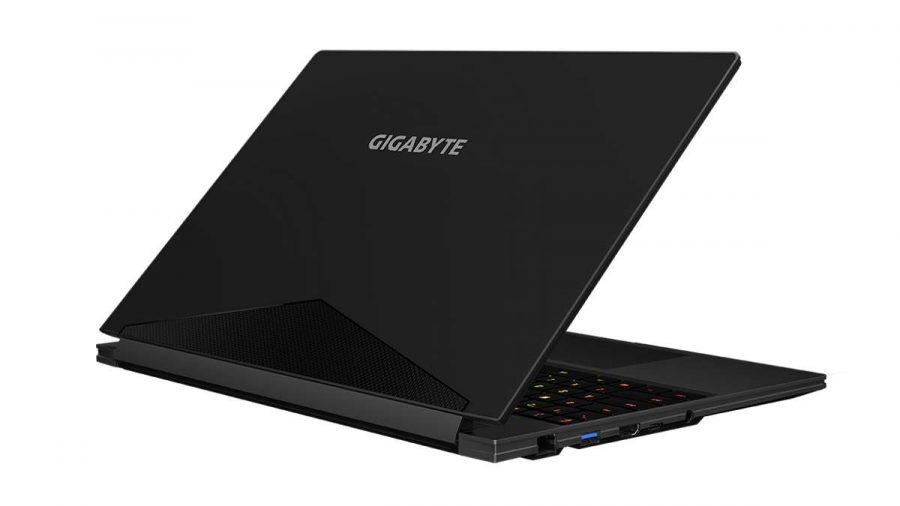 It’s also switched its component purchasing around so it only sources memory from Samsung and its storage from Intel. It was a bit of a lottery with previous Aero machines as to whose hardware you’d end up with, all depending on what was hanging out in the Gigabyte warehouses at the time. This version comes with 1TB Intel 760p PCIe-based SSD, offering an impressive amount of speedy storage for both your games and data.

As the top-spec Aero it also come with a 15-inch 4K AU Optronics IPS panel. To get the 4K screen you do have to sacrifice the 144Hz refresh you get with the LG 1080p option, but for productivity hounds it makes the Aero a great mobile photo and video editor. Though maybe a bit much for the RTX 2070 in terms of native gaming.

That RTX 2070 Max-Q design is touch slower than the standard RTX 2070; the silicon we’ve seen in the cheaper Asus ROG STRIX Scar II. But that’s by design – the Max-Q design is an Nvidia initiative to allow it to put its top GPUs into thin and light gaming laptops. It’s more aggressive about managing the power delivery, thermals, and acoustics of the GPU to fit with the slimline aesthetic, as such it’s a bit off the pace in gaming terms.

The Pascal generation introduced Max-Q, helping squeeze what were essentially desktop GPUs into skinny gaming laptops. And the new Turing silicon has taken the same approach, using the same GPUs in the mobile cards as their desktop counterparts. With Pascal, however, you would only be sacrificing around 10% of the performance for the quieter, thin and light operation.

With Turing the performance gap seems to be much wider, sometimes as wide as a 34% delta between standard and Max-Q design. The Asus ROG laptop we’re also testing uses the full-fat RTX 2070 and offers us a good indication of the gaming performance you’re leaving in the tank in favour of the smaller chassis.

It’s still a seriously powerful mobile GPU, offering RTX gaming in a genuinely portable gaming notebook. You’re probably not going to be happy gaming at its native 4K resolution, however, which is a bit of an issue with the UHD panel, and downscaling to 1080p inevitably looks far less sharp.

In Battlefield V at 1080p you’re getting 70fps – sans ray tracing – but at the native resolution that drops down to just 26fps. Metro Exodus and Far Cry New Dawn see calamitous drops in frame rate too, dropping by over a half in both instances. 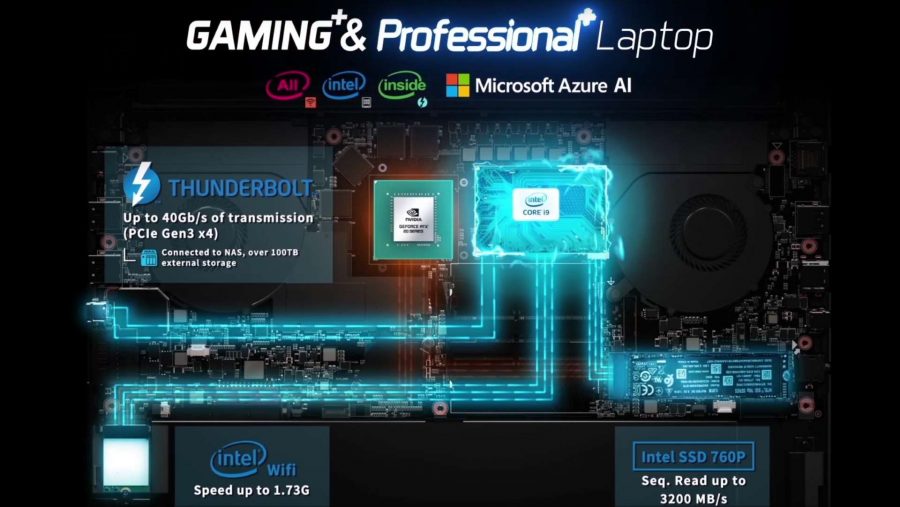 The new Turing GPU isn’t the only new feature on offer with this new Aero 15, however, you also get the most poorly named feature ever added to a gaming laptop – Gaming+ & Professional+. Seriously, which marketing genius came up with that? I want to meet them, I want to know what sort of twisted mind could create such an unmarketable monster.

But despite the ridiculous naming scheme Gigabyte has chosen for the feature, whose title I refuse to ever reference again, there is some genuine potential behind it. The AI Cloud portion of the feature uses Microsoft’s Azure AI to adjust the device’s settings on the fly depending on the different apps that you’re using at any given time. 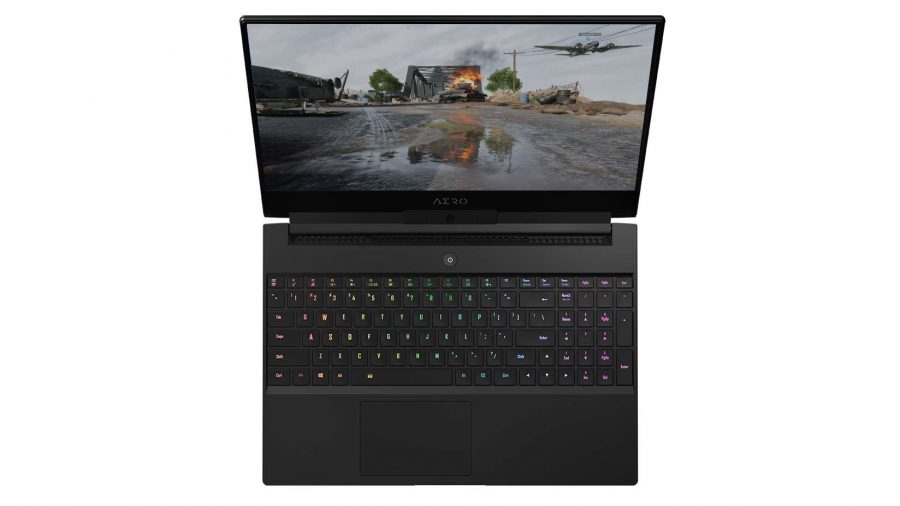 The idea being that the AI will learn how to perfectly balance the Aero 15’s settings over time, as more people and devices come online, and will be able to tailor your experience to give you the optimum performance. It will tune the GPU, CPU, fans, keyboard, and audio settings to either give you a few extra frames per second in your favourite games, or faster rendering performance in productivity apps.

That’s the theory, but we’re right at the start of this burgeoning AI revolution and right now it doesn’t seem to make a whole lot of difference in our early testing. It’s the sort of thing which should improve over time, and could genuinely be a useful feature… in a year or so. The latest updates to both Nvidia’s GPUs and Gigabyte’s AI platform don’t seem to play nicely together, so it’s probably worth revisiting the success or failure of the feature-which-shall-not be-named in the future.

Despite the AI miss the Gigabyte Aero 15 X9 is still an excellent laptop, though maybe a little too rich for our gaming blood. The Core i9 CPU, 32GB RAM, and 4K panel really push it into almost mobile workstation category, a notebook for productivity more than gaming. That $3,000 (£3,280) price tag exemplifies that.

But there are still versions of the Aero 15 that make more sense for PC gamers. Switch to the 1080p 144Hz LG panel, 16GB of memory, and a Core i7 CPU and you’re saving almost a grand, making it a lot more palatable.

The competition is starting to catch up, however, and the Asus ROG STRIX Scar II is worth a look too. It’s got a chunkier chassis, and its full-fat RTX 2070 is far louder, but its ultra-thin monitor bezel means that it’s definitely encroaching on Aero 15 territory. But the classic Gigabyte machine is still very much an object of techie desire, and it’s going to be a wrench handing this wee beauty back.

A high-spec take on the classic, diminutive Aero 15, but one that’s more aimed at the professional than the gamer market. And one that highlights the increased performance delta between Turing and Pascal's Max-Q designs.