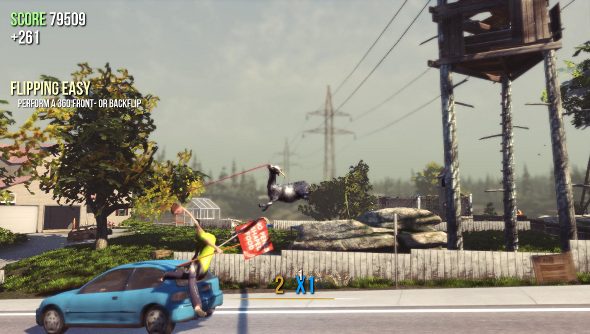 With PC retail coughing up its lungs, only kept alive by life support, it is rather peculiar to see Coffee Stain’s joke prototype turned commercial game, Goat Simulator, get a retail release. But it’s happening, though only in North America.

Steam is, and is likely to remain, the primary source of income for Coffee Stain, but the studio wanted to go ahead with a retail version for a laugh. “Steam has always been our primary source of income,” Armin Ibrisagic told Polygon, “so a retail version is nothing we planned or thought would bring us a lot of income, we were more motivated by the fact that a physical box with a goat’s face on it is pretty funny shit, so we decided to go for it.”

As well as being an amusing novelty, Ibrisagic thinks that the retail version could reach a different audience, even if it’s an unwitting one. “I can just imagine a mom seeing it in a store and being like ‘Oh, Goat Simulator, that sounds like a fun game where you take care of farm animals, little Timmy will love this!’ and the next day when they’re having dinner, Timmy’s like ‘Mom, this food is penis shaped.’”

This new version arrives in shops in the middle of next month for $9.99. Tim reviewed it at launch, though it’s gotten a lot bigger since then, and had this to say about the chaotic farm animal sandbox: “It is a bad joke, carried well: an open world anarchy simulation in which you can headbutt, lick and occasionally wear jetpacks, breaking stuff for high-scores. It is full of ideas, and even if those ideas are mostly stupid, they are still ideas.”