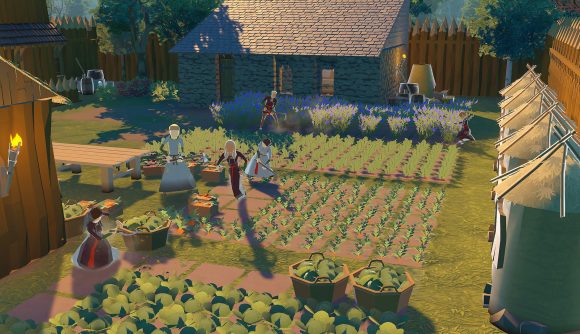 Going Medieval looked like a charming take on the ‘games like Rimworld‘ genre when we saw it last month – which, hey, is there actually a name for that genre yet? I’m not actually sure ‘city-building games‘ is right, but it’s a similar vibe. Either way, Going Medieval has entered Steam Early Access, and it’s already proving a hit among the audience on Valve’s platform.

As of this post, Going Medieval is currently the top-selling game on Steam, ahead of games like GTA 5, Mass Effect: Legendary Edition, and fellow new releases like Necromunda: Hired Gun and the 1.0 version of Griftlands. The metrics of the Steam top sellers chart are always a bit nebulous, so we just know that for some stretch of time today, Going Medieval was outselling those other games. We’ll see how Going Medieval ranks on the full, weekly top seller chart this weekend.

Going Medieval has already reached a concurrent player count of 6,107 just a few hours after launch – not bad for a small-scale game. More importantly, the early reviews are quite effusive, and the game already sits at a ‘very positive’ rating.