Dwarf Fortress, iconic for its deep, emergent gameplay and ASCII graphics, actually innovated on games like King of Dragon Pass. That older but just as classic text-based clan manager is near unrecognisable to our modern town-builders, but its influence is still felt. Dwarf Fortress has since gone on to inspire its own new generation of city-builders and narrative management games.

While the free version of Dwarf Fortress is great, it’s arcane UI and losing-is-fun design does turn off a lot of would be players. So the design was innovated and along came Rimworld. But now Rimworld has been around for years and it’s time to see what new innovations have come along since. Let us present to you our top picks of games that are like Rimworld and Dwarf Fortress for those who are wanting more, but are struggling to know where to look.

These are the best games like Rimworld and Dwarf Fortress: 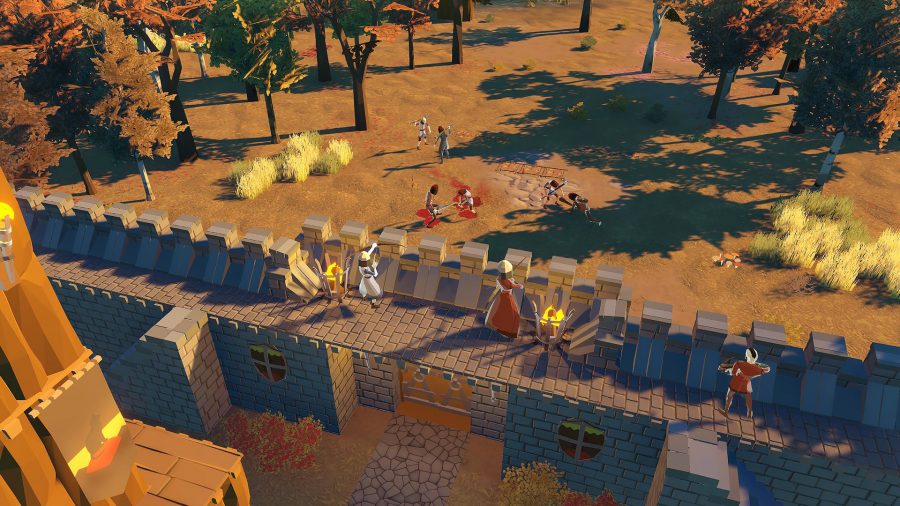 This is an upcoming Steam Early Access game that blends city-building with colony survival mechanics, offering a medieval mash-up of Rimworld and Dwarf Fortress ethos. You’re in charge of a struggling Dark Age settlement, emerging from the ashes of a plague that wiped out most of the population. You must build up your fortress and expand out into the wilderness to forge a better future for your people.

It’s already looking like an interesting take on the idea, although you’ll have to wait until June 1 to get your hands on it. One final beta will be available for people to try later this month before it hits Steam. 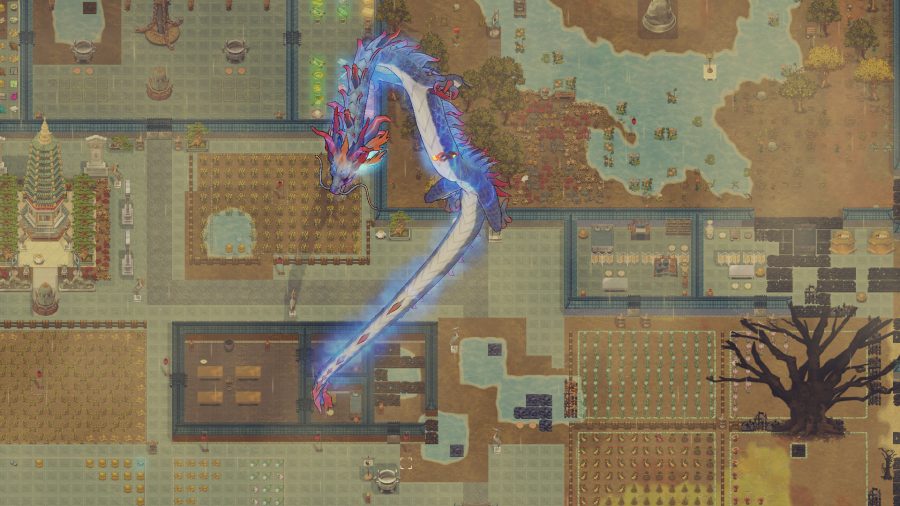 If RimWorld was based on Asian mythology, it’d probably have ended up looking like Amazing Cultivation Simulator. Now available on Steam with a full western localisation, you too can embark on a magical journey to rebuild your sect through training and the cultivation of mind and soul. And powerful artefacts.

It has that top-down 2D RimWorld style, while also offering plenty of deep management systems to sink your teeth into. You’ll need to recruit new apprentices and deal with rival sects in your quest for enlightenment in this fictional world inspired by Buddhist and Taoist philosophy. 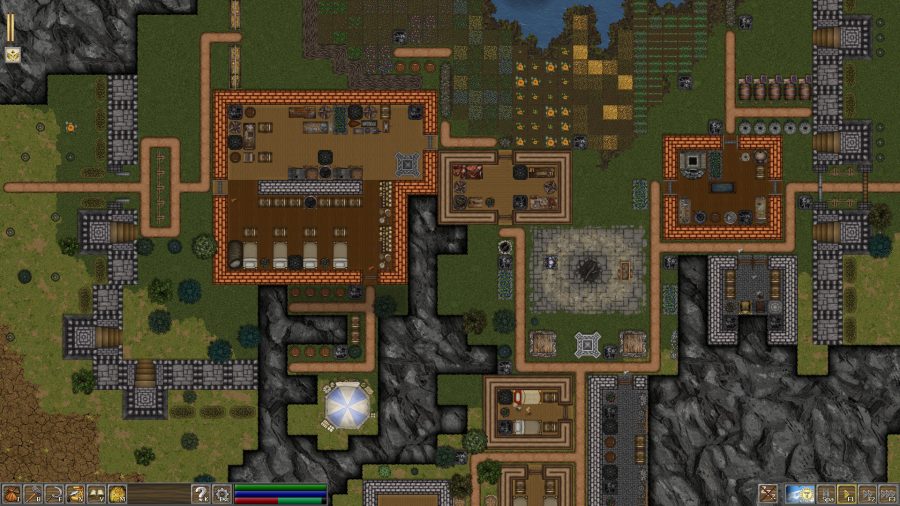 For a while, First Feudal used to be first game that Steam recommended on the Rimworld store page. It does have some similar elements: You collect resources, craft workbenches, and build workshops and homes by placing walls, doors, and floors. You even control villagers, giving them tasks and tools and satisfying their needs for food and sleep.

First Feudal doesn’t just copy the format though. Instead it is more like a town building RPG where you control a character and must build up the town by leading the villagers as opposed to Rimworld’s omniscient overseer. The concept is good, putting you in the thick of it with the villagers theoretically adds more investment into the colony. However, at time it can end up feeling more like a tower defence game. It’s been in early access since late 2017, but may also be good if you like Factorio. 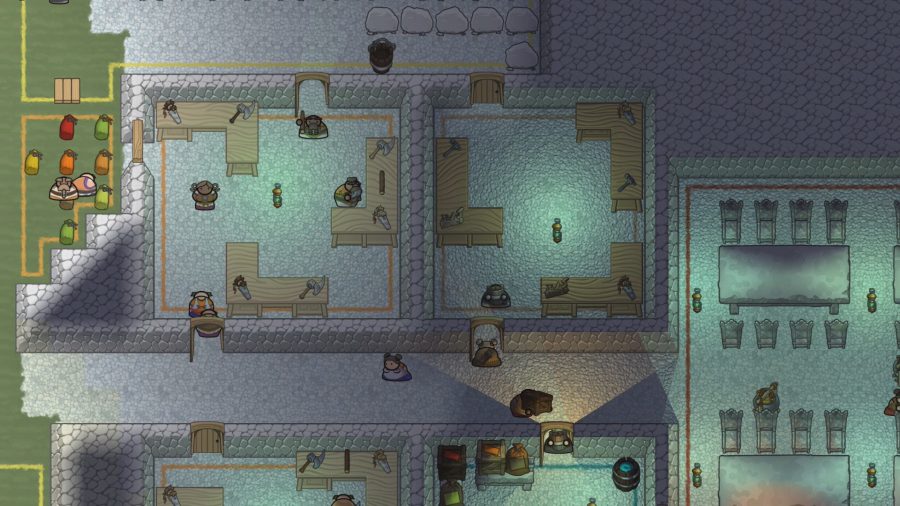 King Under The Mountain

This one is a bit of a wildcard as it’s still not actually available. It had a successful Kickstarter that concluded in the middle of 2018, and as of December 2020 it has just released its fifth Alpha build. A Steam early access release is still not expected until sometime in 2021, however.

King Under The Mountain is to Rimworld what Neanderthals were to us and both can trace their lineage straight back to Dwarf Fortress. The Kickstarter promised an experience that for all intents and purposes is identical to Rimworld except with a high fantasy wrapping and a few unique selling points. First up, you’re dwarves! Yay!

As it currently stands King Under The Mountain feels closer to Prison Architect with the furniture available to rooms being decided by what ‘zone’ they are rather than the other way around. That isn’t a bad thing though as it means the UI is kept simple and straightforward. 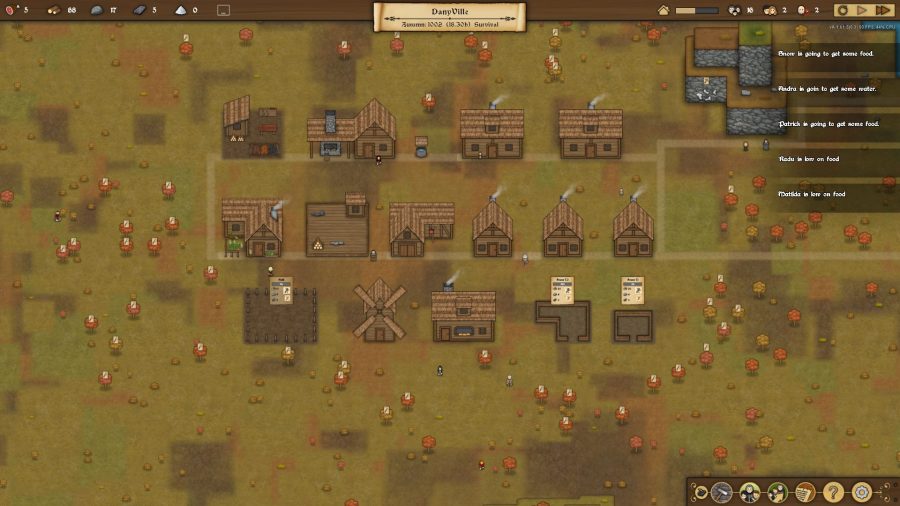 Civitatem is similar to First Feudal in that you get an avatar that is physically present in the world but doesn’t depart much from the Rimworld ancestry and keeps you in your omniscient position. It’s also similar to Rimworld in that the art style is nearly identical but that’s about as far as it goes.

Civitatem is more like sadistic town-builder Banished albeit with a tighter focus. It also gets flak for having a generic appearance it seems to have some original ideas under the hood with promises of an “exploration mini-game” to discover other settlements.

As an alternative, you might also like Medieval Dynasty, which is also an open-world survival/builder game, but it’s fully 3D and resembles Life is Feudal more than it does Rimworld or Dwarf Frotress. 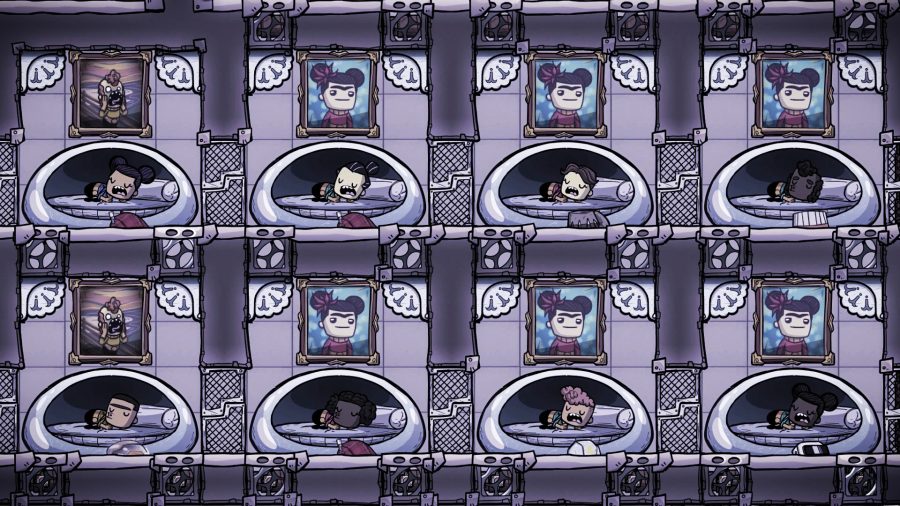 Probably the biggest name on this list, and one that most Rimworld fans will have heard before, Oxygen Not Included is one of the best alternatives we can recommend.

Swapping the top-down for side on, Oxygen Not Included puts you in charge of a clone filled asteroid base and ramps the difficulty up to 11. Not content with just managing colonist’s mental states and physical health, you are also in charge of dealing with the temperature, water quality, and pollution. Put the bathrooms next to the reservoir? Yeah, everyone’s going to get sick.

Originally I felt that Oxygen Not Included was too difficult and had little in the way of content but Klei have continued to update it at a frantic pace and have expanded and improved pretty much every month.

More like this: Here are the best simulation games on PC

The biggest challenge is managing the rising or falling temperatures, moving gasses, and dealing with build ups of polluted liquids from the small bladdered colonist. Everything about it is bursting with character from the build up of tears from sad replicants to the way they curl up like cats in their beds. 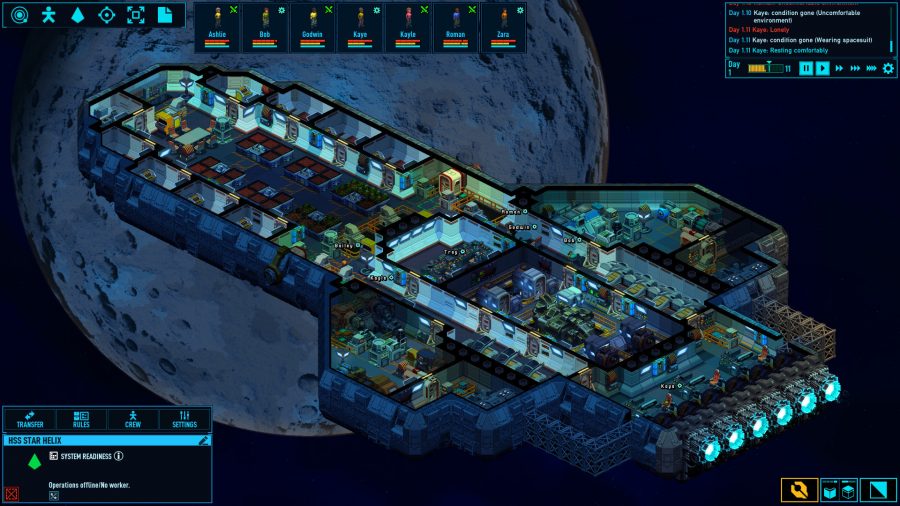 This is another wildcard in that its comparisons to Rimworld are few, but it IS one of the recommended games on the Rimworld store page. Space Haven is a colony/survival sim set in space. You’re able to build up your ‘haven’ anyway you want, and must travel to explore a procedurally generated galaxy in search of new crew, resources, supplies and, crucially, a new home.

It probably has more in common with FTL or Crying Suns than Rimworld proper, but this isn’t a roguelike. It also sports a “simulated gas system” which, while neat, is not something I’d expect to be touted as a game selling feature. But hey, you are in space. The efficient and safe transfer of air is probably quite important out in the void. 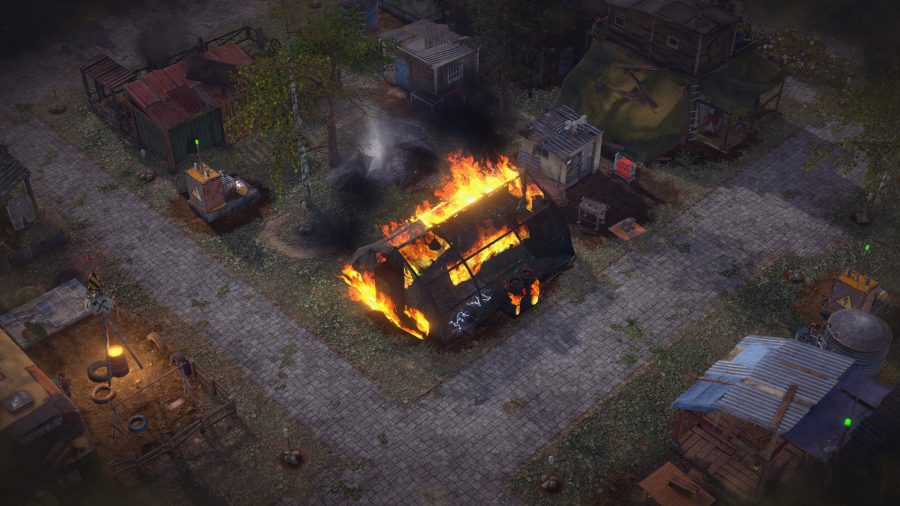 We’re including this one for similar reasons to Judgement. Surviving the Aftermath doesn’t have Rimworld’s frontier setting, nor its bleak take on interstellar outback life, but it is a game about building up a colony and surviving in a harsh world. In this game’s case, you’re attempting to guide and protect a group of survivors from an apocalypse.

One of the strengths of this game is that the ‘event’ can be whatever you want: before starting each game you get to do some set-up that will determine what kind of events you get (very Rimworld), how bad the apocalypse was, how frequent disasters happen, and so on. Other strengths include a strategic layer where you can go out, explore, meet other colonies and also fight against bandits. It’s still in early access, but it gets regular big updates every couple of months and is shaping up nicely. 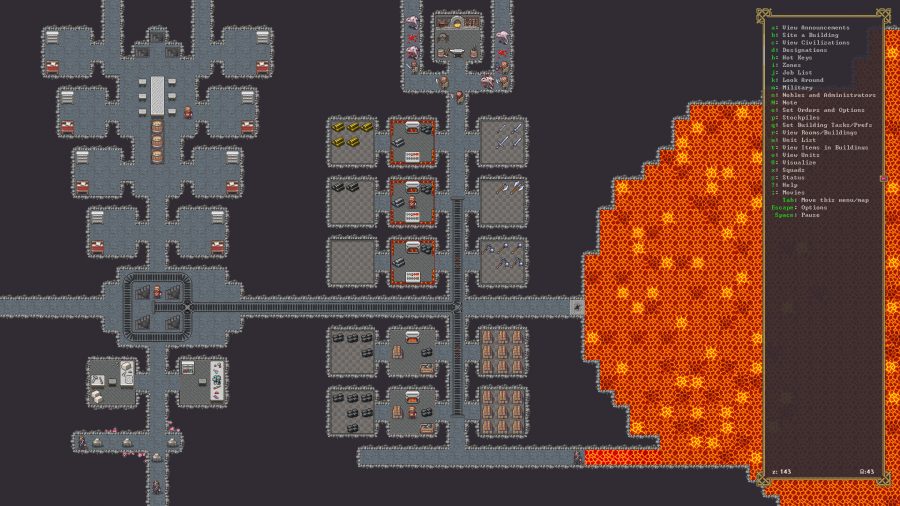 The only thing better than a game like Dwarf Fortress… is Dwarf Fortress itself! This is a bit of a cheeky entry but it’s worth bearing in mind that the upcoming Steam release of Dwarf Fortress isn’t the exact same game that legend speaks of. Developer Bay 12 is formalising the habits of some players by giving it an official skin pack which will enable graphics comparable to any of the modern successors.

The developers are also looking at adding additional premium features themed around creating a version of Dwarf Fortress for a more mainstream audience, although it pretty much plays the same and will be updated inline with the the free/classic version.

While you’re here: Check out the best strategy games on PC

Dwarf Fortress on Steam will include the original game, in all it’s retro glory, as well as skinned-up modes such as ‘Fortress’ and ‘Adventure’. It will also come with official Steam Workshop integration. Sadly, there’s no timeline as to when this will release, so we’ll have to just sit tight in the interim.