Graphics cards really are things of beauty. They’re the superstar components that render the millions of pixels and polygons that make your games look beautiful and run silky smooth. But they’re always hidden away inside your PC, so let’s get them out and expose those wonderful GPUs to the limelight they so richly deserve.

Once they’re back in one piece these graphics cards deserve one of the best gaming monitors to show off their wares.

While it might be tempting to dig out a wee screwdriver and have at your own graphics card to see what lies beneath that teasing cooling shroud, you do run the risk of damaging your beautiful pixel pusher. Curiosity kills the GPU… so they say.

To avoid the pain and ignominy of performing open card surgery on your GPU for it to die on the operating table we’re pulling apart two of the best graphics cards around from the heavyweights of the GPU game so you don’t have to. 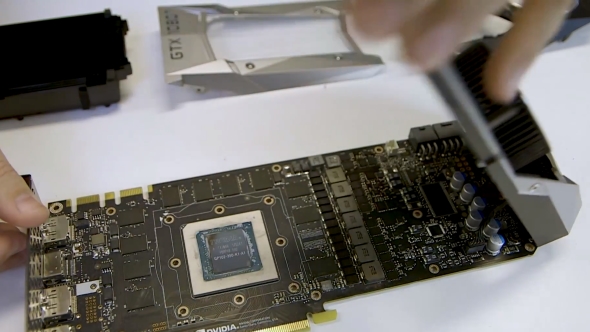 We’re delving under the hood of Nvidia’s fastest GeForce card, the GTX 1080 Ti, and AMD’s top Radeon, the RX Vega 64, to show you what the top GPUs of today look like in their rawest forms.

No graphics cards were harmed during the filming of this video. Both cards were released back into gaming PCs afterwards, where they frolicked happily shunting pixels and polygons around with gay abandon, as all good graphics cards should.