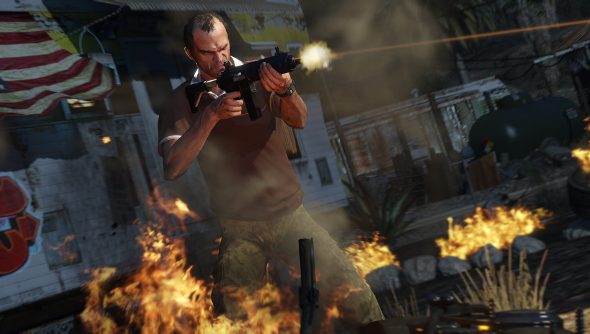 During the last Steam Summer Sale, Valve and Rockstar confused a lot of folk, including us, by advertising a GTA V discount that didn’t really exist. It was misleading and convoluted and lead to complaints.

Now, several months later, the UK’s Advertising Standards Authority have upheld the complaint and issued a telling off.

In case you’ve forgotten the big sale mess, let me refresh your memories.

On Steam’s front page, GTA V was advertised as having a 25% discount, the largest discount the game had received at that point. Yet the price was still almost exactly the same as it always was.

At a glance, it looked like the price of the game had been jacked up and then discounted by 25%, making it just shy of the regular price. But clicking on the deal revealed something even more silly. GTA V had actually been removed from the store, and replaced with a bundle that included some of GTA Online’s in-game currency, and that’s what had been discounted.

Eventually the individual game was put back on Steam, but absent a discount, while the confusing bundle deal remained.

Here’s the ruling from the Advertising Standards Authority:

“We noted the claims related to the Grand Theft Auto game had appeared in error for around a three-hour period and that the item was not included in the promotion. While we acknowledged that the claims had been duplicated, and were intended to relate only to a separate product bundle, we noted the two items appeared side-by-side, which we considered consumers were likely to understand to mean that both the game and the bundle were included in the sale.

The result is merely a slap on the wrist, however. The ASA doesn’t have the power to do much more than tell companies off and ask them not to do it again, which is exactly what’s happened here. Valve have been told not to mislead people again, and told not to use the ad again, despite the Steam Summer Sale long being ove