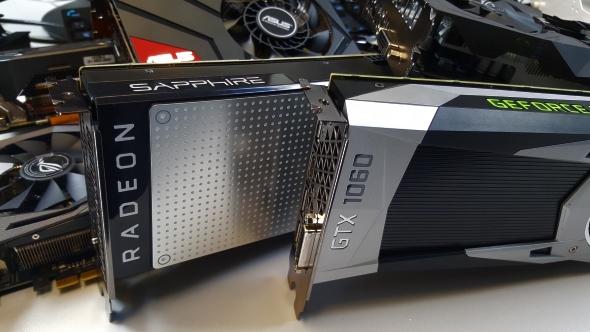 There might well be some affordable graphics cards hitting the market soon if DigiTimes’ report of a 40% drop-off in graphics card shipments is to be believed.

How do you make the most of your new graphics card? With one of the best gaming monitors, that’s how.

We reported earlier in the month that cryptocurrency mining machine manufacturers were being asked to halt planned shipments of their ASICs due to “lackluster replacement demand for mining machines.” Thankfully the same thing seems to be happening to graphics card manufacturers too.

DigiTimes claims that Taiwanese card makers, Gigabyte, MSI, and TUL, are all expecting to see shipments in April drop by a massive 40% month-on-month. They’re saying that a lot of their big clients, such as distributors and mining farms, have either suspended, or cut, their orders of graphics cards.

It all seems to be down to a combination of a general slowdown in the cryptocurrency market overall, as well as a growing trend of companies holding back on graphics card purchases because of the Bitmain ASICs set to arrive in the third quarter of this year. Those are the ASICs specifically designed to take on the previously GPU-centric Ethereum and Monero altcoins.

Developers for both those cryptocurrencies have spoken about their wishes to keep the currency out of the hands of Bitmain, after the Chinese company has achieved an almost 50% stake in the hashing power of Bitcoin, and therefore more power over its price than any other single entity/organisation. It will be interesting to see if the devs are able to keep their anti-ASIC defences intact once the new AntMiner ASICs arrive.

Ethereum’s developers in particular have just published their proposal for moving away from the potential grasp of mining ASICs, and GPUs too, with their transition towards a proof-of-stake, rather than proof-of-work, consensus model. Their hybrid model will cut potential block rewards for miners from 3 ETH to just 0.6 ETH per block. That’s a massivedrop of 80%.

“Excessive energy consumption,” say the Ethereum devs, “issues with equal access to mining hardware, mining pool centralization, and an emerging market of ASICs each provide a distinct motivation to make the transition as soon as possible.”

But the good news for us gamers is that it should mean there are a host of brand new, freshly minted graphics cards just sitting in the factories and warehouses of the manufacturers with no-one to buy them.

DigiTimes are suggesting that both the card manufacturers and channel distributors will be “forced to slash prices for sales promotions” to deal with their halving margins. We’re already seeing GPU prices slowly coming down, and fingers crossed that’s only the start of it.

Are we coming out of the dark times? Or is this just a blip? It’s probably too soon to tell, but the sun’s just come out here, so I’m taking that as a really positive omen…