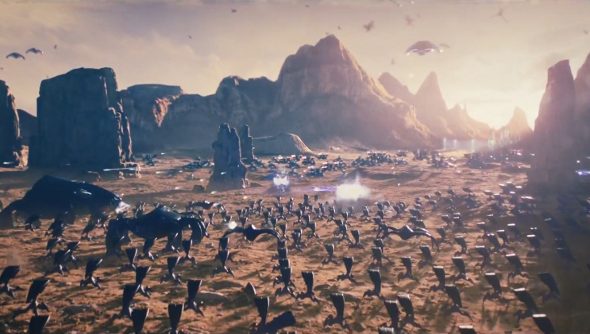 Goo is rarely a good thing. Whether it’s used as a weapon by tribes of children on TV shows or found oozing out of an orifice, it’s bad. The titular Grey Goo from Petroglyph’s upcoming RTS – due out on January 23rd – is worse than most goo. It’s sentient and has a taste for conquest.

As the launch trailer shows, there’s a reason that the humans and aliens are a wee bit worried.

Rob took a look at the slimey RTS last year. “It’s exciting to see Petroglyph pushing asymmetry this far. Petroglyph really are doing some of the most interesting faction design I’ve ever seen in an RTS, and it plays off the relative simplicity of their systems. It will be fascinating to see how the factions interact in Grey Goo, especially in multiplayer, when it comes out this fall.”

Take a gander at his preview, where he begins his life as a Grey Goo.