Guild Wars 2: The Icebrood Saga Episode 3‘s title cuts to the heart of its story. ‘No Quarter’ drops you unceremoniously into the battleground of the MMORPG‘s raging Charr versus Charr struggle, “an epic confrontation against former allies as conflict between factions of Charr warriors erupts into all-out civil war”. And, as developer ArenaNet reveals during a demo of the new episode, no-one’s getting out unscathed.

The epicentre of this war is the exquisite but troubled new region: Drizzlewood Coast. Tucked away in the secluded, verdant Woodland Cascades of Tyria, the area’s natural beauty forms a brutally contrasting backdrop to the bloodshed and turbulence disturbing it. Those disturbances dominate the region, carving up zones with a new feature: coloured borders denoting faction-owned territories.

Different bases are scattered about the map, each of which forms the hub of each territory. As the Charr civil war erupts across the whole of Drizzlewood, each base naturally needs to be contested – wrested from the grip of the Dominion forces led by this episode’s antagonist, Bangar Ruinbringer. That means one thing: siege tactics are the order of the day.

Similarly to Guild Wars 2’s World vs World mode, players need to form bands to besiege enemy-held territories, battling Charr forces to weaken, ransack, and assume control of each. I enlist with Efram Greetsglory and the United Legion at Umbral Grotto to take back Petraj Overlook, a stronghold on Drizzlewood’s east coast, and it’s a tough fight from the get-go.

The second our group crosses the red (Dominion) territory line, conflict begins on the forest floor. We cut our teeth on enemy patrols before we reach their timber-fronted fortress and the full siege begins. There are snipers, ground forces, and fire shamans to contend with, but you have multiple siege weapons, such as ballistas and flame rams, to lend a hand. The goal is to wear your foes down until you provoke their commander to emerge and set yourself up for the final push to victory. Once inside, it’s every Charr for themselves as one final scrap decides the siege’s success. 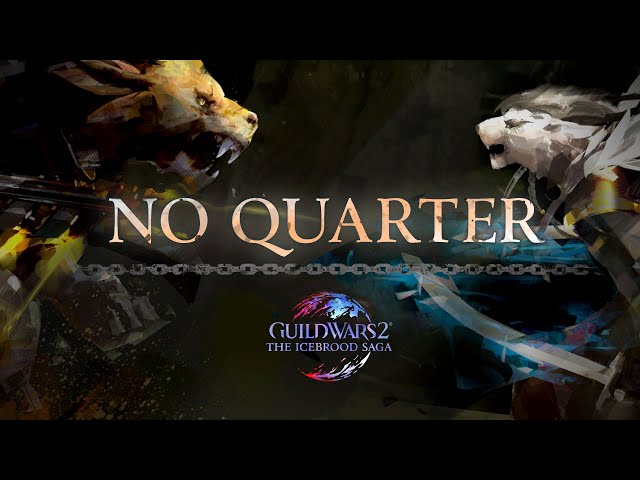 Once you’ve overcome the last of the fortress’ resistance, the territory is yours, and the colour of the map borders shift to reflect its proud new owners. As you’d expect, however, holding onto a keep is just as vital as taking it.

Keep troops fed, watered, and kitted out and you'll nudge their morale bar in the right direction

No Quarter introduces a new ‘troop morale’ bar that you’ll have to keep an eye on to make sure you don’t lose your patch to the Dominion faction. The lower it gets, the more likely it’ll fall under siege. There are plenty of ways to ensure your contingent’s wellbeing, though. Keep them fed, watered, and kitted out by repairing weapons and bolstering fort barricades, and you’ll nudge that bar in the right direction.

In addition – reminiscent of the Mad King’s Labyrinth zone – a bunch of different events may occur in each base’s surrounding area, with each event cropping up in at least two bases. Activities include squashing skirmishes between foes and allies, bringing down Charr copters with rocket launchers, and sniping enemy propaganda balloons out of the sky. Each stronghold also gets its own allied ‘Keep Lord’, with stories and key information to share. 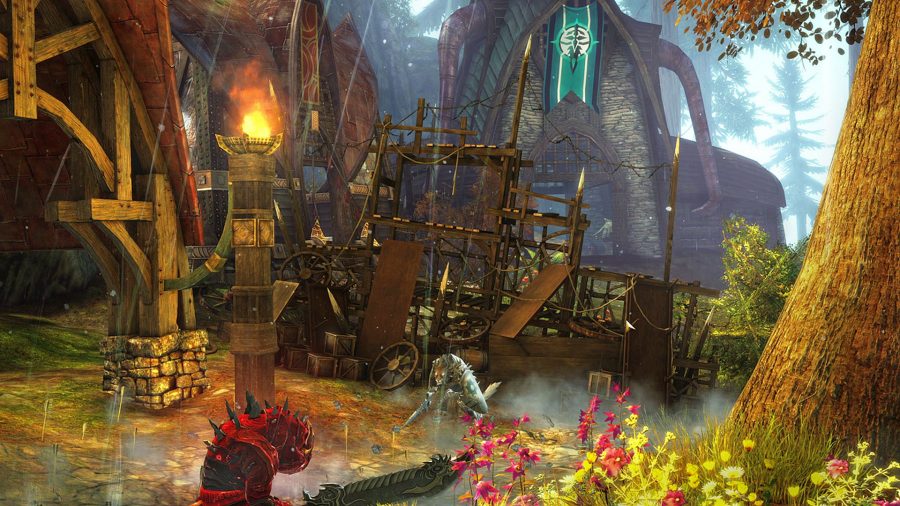 ArenaNet wants players to feel fully immersed in the ongoing civil war throughout the episode, and it does seem to have pulled this off. Venture beyond your faction-owned zones into the lush forests beyond, and signs of the Charr struggles are inescapable. Nestled between trees are listening devices, planted to further factions’ causes; plugged onto the side of farm houses are propaganda speakers; patrolling quiet portions of the map are enemy scout forces. The war permeates every inch of Drizzlewood.

Hordes of troops attack your band at once, while Charr tanks rampage around the field and a copter circles above

The flip-side of everyone’s embroilment in the war, however, is the shared benefits. As the devs explain, you don’t have to worry too much if you can’t successfully tackle every single base; everybody is rewarded for everybody’s efforts.

A flashpoint of the civil war takes place near one of the northern keeps, Wolf’s Crossing, with an enormous battle that sees the Dominion throw everything they’ve got at the allied Legion forces. Hordes of troops attack your band at once, while Charr tanks – like the one you escort in the last Living World, Visions of the Past: Steel and Fire – rampage around the field and a copter circles above. 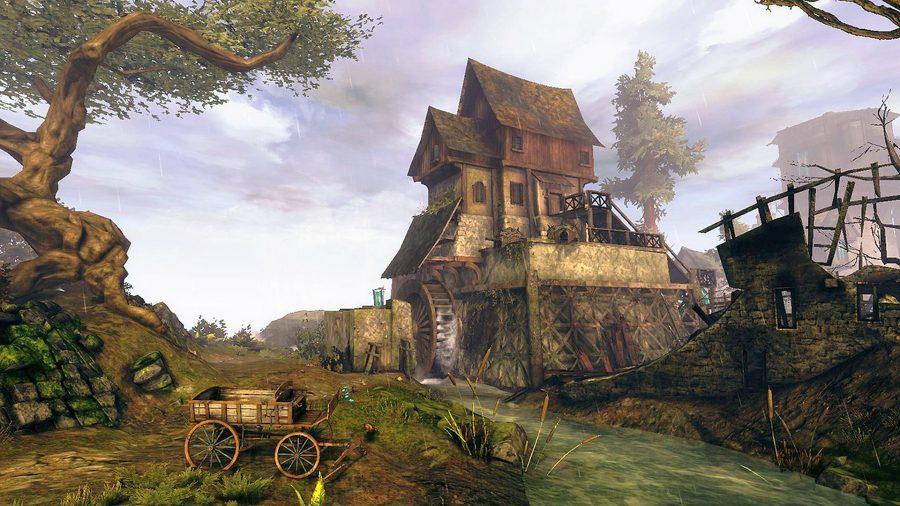 There’s a familiar face steering the chopper, Nicabar Steelweaver, who has one hell of a trick up his sleeve: he’ll intermittently swoop down, scoop everyone up into the air, and release them to fall back to earth far below, dealing some serious damage. You’ll have to employ some creative dodging tactics if you want to see the battle’s end. He’ll even toss weapons and health items to his own troops during the battle. Sneaky. At least the allied forces have some handy explosives lying around.

Alongside the main map-wide meta events, Episode 3 brings a whole bunch of new loot to reward your efforts. There are new Tengu and Stormcaller weapon sets, a four-piece armour set “inspired by the ceremonial garb of norn Bear shamans”, United Legions Waystations with special action skills, and even a new emote: Play Dead. Mid-battle’s probably not the time to whip that one out, but it does help lighten the mood between skirmishes as the Charr civil war rages on. 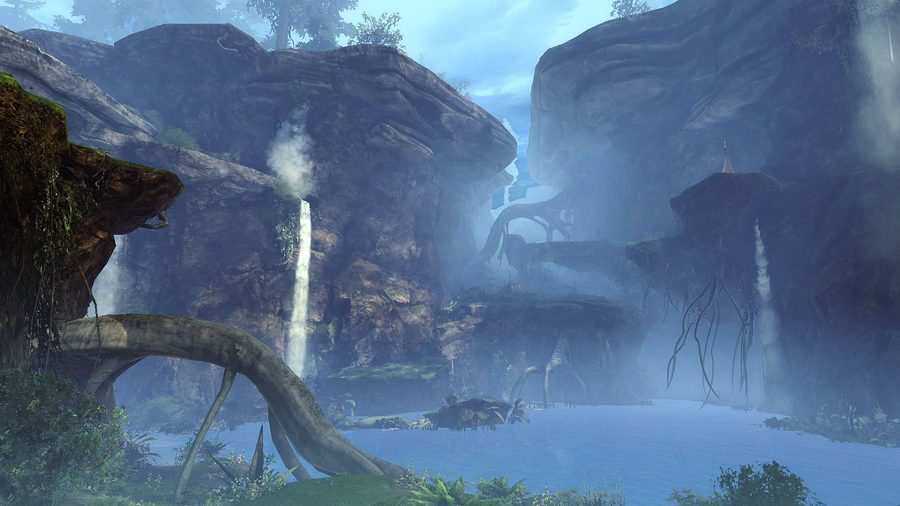 There’s also the brand new strike mission, Cold War. I could tell you more about this but, as the game will warn you before venturing in, the mission holds some major plot spoilers for the No Quarter story arc. “Gather your allies and relive the desperate stand against the Dominion and their new found power,” is the task; what that new power is, exactly, and who you’ll encounter along the way to take it out, you’ll have to get stuck in and discover for yourself.