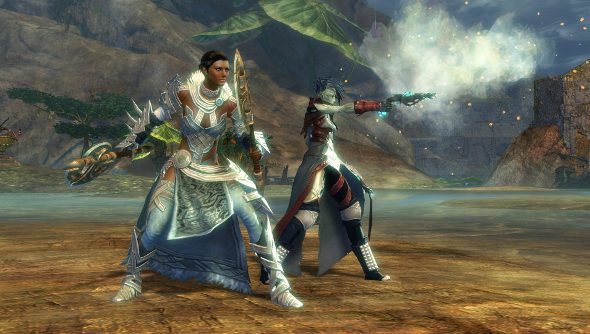 The first season of Guild Wars 2’s living world ended last month, with the death of the conniving Scarlet Briar. It was a narrative a year in the telling, with a plethora of updates pushing the story forward, adding new content and new challenges. But with that over, ArenaNet has moved their gaze to the game’s systems. This has lead to the April Feature Pack – an update focused entirely on balance tweaks, improving existing systems and “quality of life” changes.

The big features of the update, which will be live within the day, include the new wardrobe system, revamped traits and the megaserver. I had a chat with Guild Wars 2 game designer Isaiah Cartwright to get the skinny on what to expect when the patch is rolled out.

Guild Wars 2 has a lot of eye candy. The exotic, often bizarre, armour and weapons are striking, detailed creations. With dyes and the transmutation system, players have always been encouraged to experiment with fashion, designing their own almost unique look. The wardrobe system brings this even more to the forefront of the game, letting players have greater control over their character’s appearance, with less fuss.

Cartwright opened up the hero tab on his demo character. This single tab has now been split into three. First, there’s the basic inventory screen, where you can switch out items and sort gear out. But the dye section which once shared the same tab has now been pulled out and given its own separate menu, with a few improvements. Cartwright selected a dye – each of which is now account bound – and hovered over his character, and the armour changed colour allowing me to see a preview before committing. 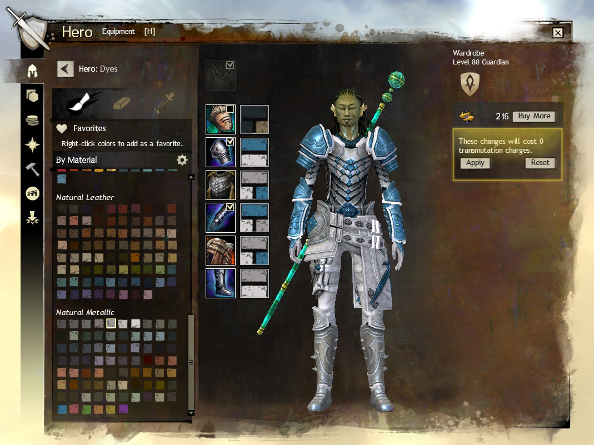 The wardrobe system is the final tab. It’s where pieces of players have collected from a multitude of adventures throughout Tyria are stored. Wear, salvage or destroy a piece of gear, and it will end up in the wardrobe system. These styles can be applied to other items of the same type, costing transmutation charges. So one don’t need to select transmutation stones in their inventory and use them to swap the powers and look of items. The point was to streamline the system so you could do it all in one place, said Cartwright.

While customising the appearance of your character has always been part of Guild Wars 2, it’s never been so integrated into the exploration and playing of the actual game. It was some icing. But now there’s an impetus to go out and find new art to apply to gear. The bank storage now has a wardrobe tab, which reveals every single piece of art in the game. There, the art can be previewed, and serves as motivation to go out and seek out new gear.

The revamped trait system has cut out the middleman. No more going to trainers or buying books – “We’ve just made it so you can kinda change your build on the fly,” said Cartwright. And where each tree had 30 points that could be poured into it, increasing traits incrementally, one point now equals five from the old system. Unlocking new traits can be done by purchasing them at vendors, or there might be a piece of content associated with it, which – if completed – confers upon the player the new trait. It makes it more goal orientated, explained Cartwright. He also stressed that current players who have already accessed these traits will retain access. 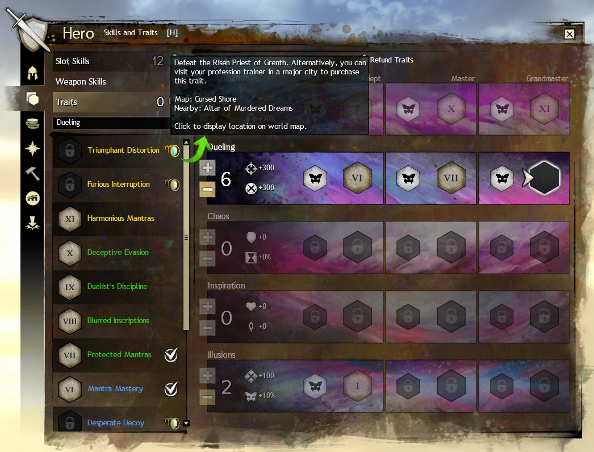 New traits have also been thrown into the mix for everyone. Every trait line now has an additional grandmaster trait, so that’s 40 new traits. Not an insignificant amount.

“The whole point of redoing the trait stuff, is to make it easier to interact with changing the builds, and making you able to bounce back between different styles of play,” said Cartwright.

In PvP, this build experimenting is expanded even further. There’s a build UI now, where players can swap out traits and equip any gear from their inventory, transforming it into a max level item. Similarly, sigils can be swapped around in this UI so players can fiddle around with their build.

Sigils have been tweaked quite a bit in the update. There’s no longer the disparity there was between wielding two one-handed weapons and a two-handed one in terms of sigils. Where once players could only attach one sigil to a two-handed weapon, they can now affix two, just like player who is dual-wielding. Some hidden rules – like some sigils not stacking, Cartwright offers as an example – have been removed, as well. New sigils have been added, too. They can be picked up for a gold cost, but this unlocks them across all characters. 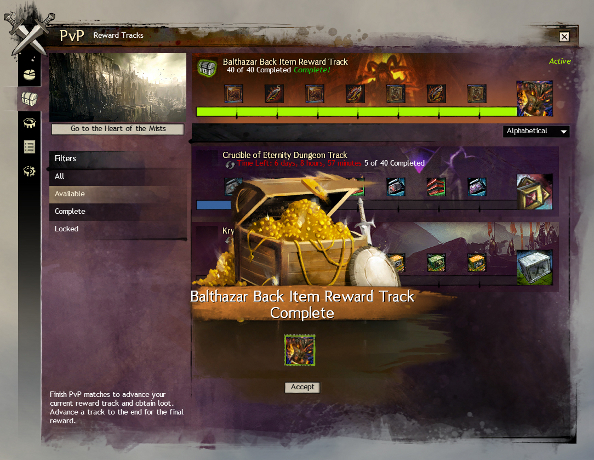 Cartwright noted that the reward tracks for PvP have undergone some changes. Currency like glory has been tossed out the proverbial window, replaced with reward tracks. “As you play PvP, you’ll earn experience on this track, and as you hit these thresholds, you’ll unlock items that’ll give you skins, or PvE items or gold and things like that… and you can swap between different tracks.” One of the tracks Cartwright mentions is the dungeon track. It cycles weekly, but you can go into that dungeon, complete it and unlock it permanently. This allows players to switch between tracks, earning a lot of the items from the dungeon through PvP.

Another significant change to PvP is the inclusion of a new arena map, for players to partake in some gladiatorial, small scale clashes – duals between old adversaries, chums who want to check out a new build in a one-on-one match. Players were appropriating areas in other maps for this purpose, so ArenaNet wanted to create an official place for this style of play.

The map is a circular arena, with avenues moving out from the centre like spokes on a wheel. The terrain is varied, but it’s a more controlled, enclosed environment that facilitates simple find and kill battles absent the objectives of other maps. Like other maps, it is team based, but custom rules can be set up to allow for 1v1, 2v2 matches and so on.

The megaserver is possible the most gargantuan change that the update brings, and not just because it contains the world “mega”. It takes all the separate worlds – the servers you choose at the start – and puts them all into one big pool. Players will still be sorted by their chosen world, but the system can sort multiple worlds into one map. 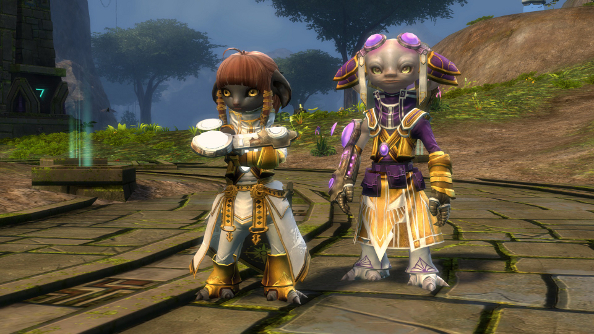 The point is to make maps populated. “If you had a map before that only a few players from all the different worlds were playing, that map would only have a few people in it, but now it has all of the players from all of the worlds in it, so that map will always feel pretty full,” explained Cartwright. Overflow maps will still exist, though, and will pop up when maps get full, dynamically adjusting the number of maps available based on the number of people playing. The feature serves to maintain players’ social groups – the people they party with and are in the same guild with – but also matches them to players in the same area, forging a community.

Much of the update content brings PvE and PvP closer together. PvP items are gone, with PvE items becoming PvP items when you enter the competitive space; the wardrobe system allows players to wear PvE styles in PvP, and old PvP gear in the rest of the world; and dungeon, region-specific and event items normally unlocked through questing and killing mobs can now be earned in WvW and in custom matches.

ArenaNet hopes that the changes will inspire players to fiddle around with new builds and consider fresh approaches. “I even think just the UI, I know for us internally, we like to play with lots of different builds, but as we’ve been playing with it we noticed making the UI streamlined – where it’s just a couple of quick clicks to change builds – really encourages you naturally to experiment,” said Cartwright.

So the question is whether or not this chunky feature pack will make Guild Wars 2 more friendly and open – the main goal driving this eclectic mix of features.