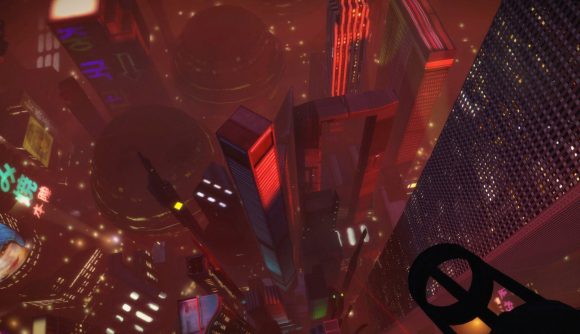 After 12 years, the incredibly ambitious Half-Life 2 full conversion mod G String has been released. Transforming the classic FPS game into a mix between Cyberpunk 2077 and Blade Runner, the mod promises a large-scale action-adventure game that explores a future destroyed by climate change.

The project, available on Steam, trades Gordon Freeman for Myo Hyori, a Korean teenager living on a planet Earth ruled by the North American Union after environmental destruction has irrevocably altered the Earth’s habitat. In her trusty Bortz Bioengineering Biosuit, she explores a huge metropolis, stuck on a world that continues to disintegrate. The rich and privileged live in space colonies, while the rest struggle under an oppressive, anti-religious regime.

Creator Eyaura released a gameplay trailer in December last year, and if you showed it to someone out of context, they’d probably think it’s an unreleased Blade Runner RPG game from the early 2000s. The city setting seems to stretch forever amid an orange hue, a pyramid in the distance – a clear visual reference to the Tyrell Corporation – acts as the major point of reference. Another trailer, from July, shows the combat and exploration still resembles Half-Life, though with a good deal more aerial dogfighting, as the offworld sections demonstrate.

“This is a cyberpunk-inspired first-person-shooter with light environmental puzzles and a long, detailed single-player campaign focused on story and world building,” the Steam description reads. “G String aims for an old school approach where there is minimal hand holding and your biosuit automatically keeps track of your health stats, ammunition count, and armour condition.”

You watch the trailer from July below:

Although Eyaura did the bulk of the work themselves, they received some assistance in the release from published LunchHouse Software, as well as Valve themselves, though what role Valve played isn’t specified. If you want to read more of the setting and lore before diving in, you can check out this free PDF on all the world-building. G String is available on Steam right here.