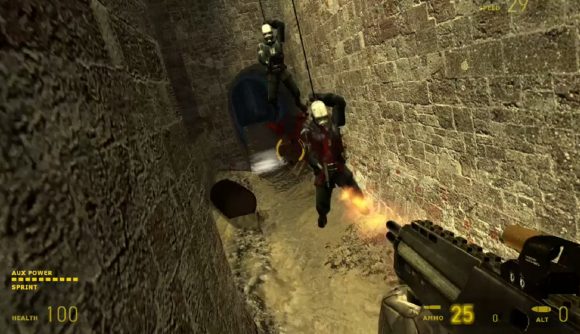 How do you make one of the most celebrated first-person shooters of all time even better? Combine it with another of the best shooters ever, obviously. That’s the solution that the creator of one particular Half-Life 2 mod has happened upon, at least.

The Half-Life 2 Mobility Mod is inspired by the freerunning antics available to your pilot in Titanfall and Titanfall 2. What that means is the mod lets you turn Gordon Freeman into Gordon Freerunning. Yes, you can play Half-Life 2 by running across the walls, double jumping, power sliding, and climbing ledges.

The first version of the mod actually came out in August 2018, but the second version was released this week, so you can go ahead and download that from its ModDB page. It brings with it movement enhancements, new melee controls, bug fixes, and it combines Half-Life 2 and its two episodes into a single mod for easier playing.

There’s more, too, including EGAR – which stands for Everyone Gets A Rocket! – a weapon that fires a barrage of rockets at a single or multiple targets, and then regenerates ammo. What a blast! It’s a cheat, sure, but a very fun one at that.

The EGAR sums up the attitude of the entire mod, actually, which is to be fast, explosive, and designed to make you feel powerful. This is done by letting you cook grenades, reducing the bullet spread of automatic weapons, and giving bullet impacts a louder and bassier sound. Get a load of it in the trailer above if you haven’t already.

Haven’t played Titanfall 2? It’s one of the best FPS games on PC

If you’d rather play something more modern than Half-Life 2 but that still has a similar sense of bombast and speed then play Titanfall 2. It’s the game that developer Respawn Entertainment made before Apex Legends. It is very good – one of the best single-player shooters ever, some would say.