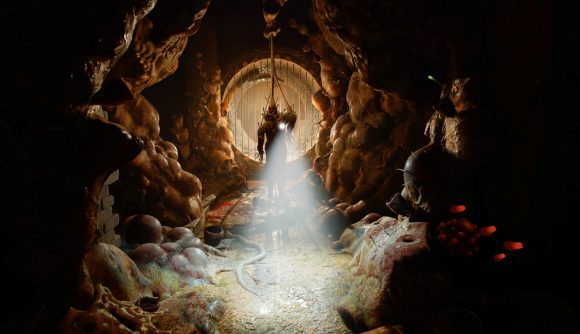 The next Half-Life game is a VR exclusive. That means you’re going to need a pretty expensive hardware setup beyond your existing gaming PC to enjoy it. If you’re holding out hope for a non-VR version of Half-Life: Alyx, Valve’s got some bad news: this is a game that straight-up would not work with a mouse and keyboard.

“We would love to be delivering a version of this that you could play with a mouse and a keyboard,” Valve’s Dario Casali says. “But as we said, it began as an exploration of VR. The more we used the controllers and the headset, the amount of possibilities these things give us, the more we realized that there’s so much opportunity that we can’t really translate back to the keyboard.”

“The amount of complexity that’s going on there, it’s just so hard. We would have to map an entire section of the keyboard dedicated just to interacting with doors if we wanted to have that kind of functionality. Whereas it’s so intuitive for you ’cause you know how a door works and you can sort of crack it open a little bit with one hand and put your gun through with the other.”

You can see much more in the video above. Casali’s quoted comments start at 9:43.

The Half-Life: Alyx release date is set for March 2020, and the game will include proper mod support. We’ll see what the future holds for this massive entry into VR soon enough.