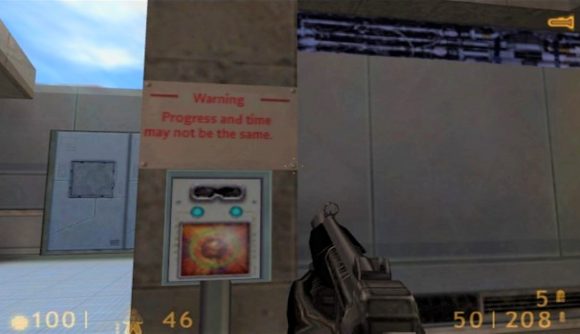 There’s a brand new – and pretty excellent – reason to dust off your copy of Half-Life and get stuck into Gordon Freeman’s adventures once again. A modder has created a “warped” version of Half-Life where basically everything has been put through Google Translate several times and then back again – making it “horribly mistranslated”.

The Half-Life: Google Translate Edition mod by creator SausageEggs is a “warped version of Half-Life where every bit of text and dialogue has been translated to several different languages in Google Translate, and then translated back to English”. Inspired by YouTuber Fatguy703’s Book of Mario 64 videos in which he gives Paper Mario 64 the Google Translate treatment, the HL: GTE changes the FPS game’s in-game titles, UI elements, model and map textures, the Black Mesa announcer, and even the spoken dialogue.

“The result is a wacky, distorted, hilarious version of the FPS we all love”, the creator announces – and from pictures uploaded to the mod’s page, the results are indeed pretty funny.

Deemed ‘Technically not wrong’, the images show some, er, interesting results. “They were having problems in the exam room, but it feels like I am taking a shower”, says a hardworking security guard. “Well, hi! Eat your polio from space!” another says. Action input controls in the UI become: ‘Protest’, ‘Less Protest’, ‘Power tools’, and even more strangely, ‘After spraying’. Hmm.

There are even some pretty profound messages to be discovered, like a sign that reads: “Warning. Progress and time may not be the same”. Woah.

If you’re keen to grab the mod, head to ModDB here. As ever, mod at your own risk!

“Have fun” the creator says. Thanks, SausageEggs – I’m sure we will.