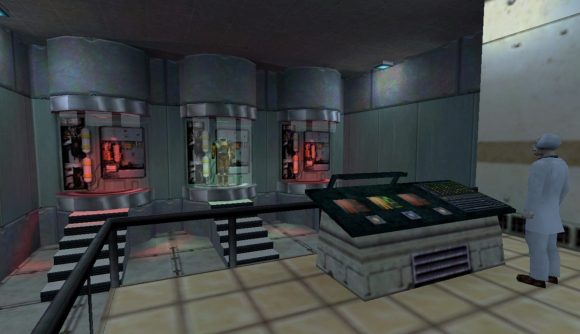 There’s still no news of a Half-Life 3, but it appears that Valve is still working to make the first Half-Life the best it can be, despite the fact that it’s more than two decades old. The original FPS adventure that sees super scientist Gordon Freeman take on an alien invasion has just received an official update. While nothing in it is likely to make a huge difference to the game, it has patched a few pesky bugs.

The update details have been posted on Steam, and mostly cover minor gameplay features, like fixing the “inability to reload a partially empty weapon after reloading a save game,” some various weapon animation and sound problems, and similar issues. There is, though, one fix that could potentially have an interesting effect on Half-Life speedruns – Valve’s “fixed [the] NPC turn rate when running at >60FPS.”

As some users in a Reddit thread about the update highlight, in Half-Life NPCs turn around faster if you opt for a lower FPS rate. According to speedrunning guide wiki Source Runs, while it’s generally better to use a higher FPS rate when trying to do a speedrun through the game, sometimes it makes sense to go for a lower FPS, in part because if NPCs then turn faster, ones who need to do things like open doors for you will do so more quickly – which can help you get a better finish time.

With this update, it sounds like players might now get to use a higher FPS but keep the quick NPC turns – assuming of course that this is what it means by “fixed.”

If you’re wondering how many people might still be playing the 1998 title in October 2019, well Steam Charts has the answer – the site puts the average number of Half-Life players over the last 30 days at 344, with a 24-hour peak of 458 at the time of writing. That’s not bad considering its age. Hopefully these 300-or-so players will be chuffed to see the bug fixes.