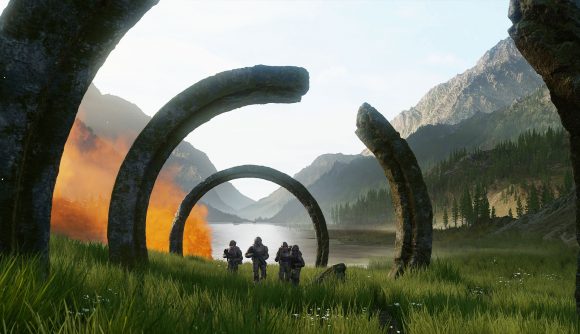 Halo Infinite debuted at E3 last year in only the vaguest way, but that initial trailer suggested a much broader scope than we’ve seen from the series in the past. That’s backed up by comments from 343 Industries chief Bonnie Ross, who characterises the new game as a sort of “spiritual reboot” for the series – suggesting that even if the new game isn’t rewriting the lore, it is taking a step back to redefine what Halo can be.

We’re getting more proper details on Halo Infinite at E3 this year, but in the meantime Ross has given a few hints in an IGN interview. She says “We’re kind of calling it a ‘spiritual reboot,’” as noted by Comic Book.

“Maybe it took us two games to get there, and I think we’ve done good things and bad things, but what does Halo mean to us? It is about hope, and wonder, and heroism, and humanity, and community, and bringing a community together. That’s what that trailer is, and that’s what we want to do.”

That trailer showed a lot of large, open environments, and while big levels were one of Halo’s most notable features back in 2001, the potential scope of game locales has increased exponentially since then. Halo Infinite has a new engine, and there’s been plenty of speculation that’s going to help facilitate a much more ambitious scope for the game.

You can see the interview with Ross in full above.

Related: Don’t miss any of the biggest upcoming PC games

Don’t expect the Halo Infinite release date to hit soon, though it will for the first time be the same across both Xbox and PC. Whether ‘Xbox’ here might slip to mean Microsoft’s next console platform remains to be seen.