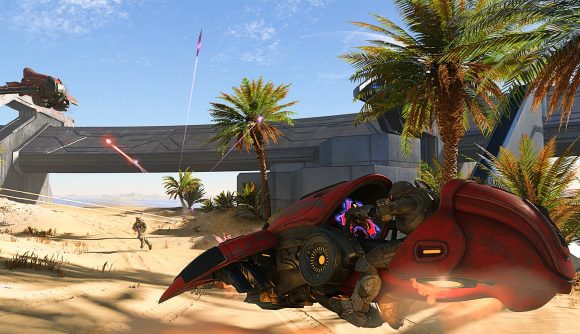 343 Industries is making Halo Infinite’s battle pass less of a chore to grind, which may come as a relief to some of you. Halo community manager John Junyszek has taken to Twitter to explain some of the reward track changes coming your way later this week.

You’re getting “play one game” challenges to ensure you can consistently progress through the battle pass by playing the matches you want. The team is also making some changes to weekly challenges to streamline progression, with adjustments, bug fixes, and even the removal of some. Changes to challenge difficulty, in particular, will help you complete weekly challenges faster, which should speed up your progress through the battle pass. Finally, double experience boosts will now last for one hour instead of 30 minutes, which the team hopes will aid you in getting more out of them.

Your progress on this week’s challenges will need to be reset for the fixes to be implemented, but everyone is getting an ultimate reward to make up for it, which is the Sigil Mark VII visor. Make sure you log in between November 23 and November 30 to pick it up.

“We’ll be watching these changes closely to make sure they have the positive impact we all want on your progression,” Junyszek says. “This is only our first step – we are committed to continue evolving these systems, but it will take time.”

We'll be watching these changes closely to make sure they have the positive impact we all want on your progression. This is only our first step – we are committed to continue evolving these systems but it will take time. Thanks for joining our beta, and keep the feedback coming!

As per SteamDB, Halo Infinite swiftly hit a peak of 272,586 concurrent players on Steam when multiplayer got a surprise launch. While the feedback has been extremely positive, the battle pass came in for some criticism. While Halo Infinite’s reward tracks stick around forever, many fans found the progress way too slow, and not wholly satisfying.

We’ve been playing this one ourselves, and we’re having a jolly good time. Halo Infinite’s pistol, in particular, has taken deputy editor Jordan’s fancy. You can follow that link if you want to see all the Halo Infinite Season 1 battle pass rewards.