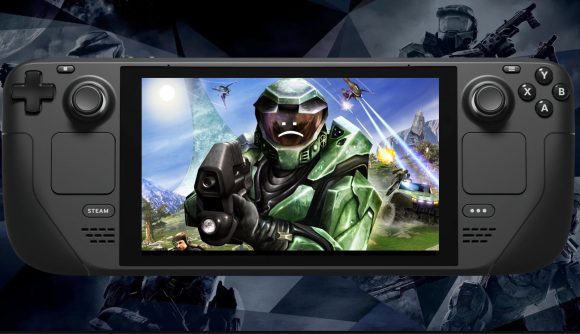 Halo MCC may be ‘unsupported’ on the Steam Deck, but plenty of players have been able to get the game’s campaigns up and running on Valve’s handheld (albeit on their lonesome). However, it appears that the most recent update to the game has rendered the FPS game unplayable on the portable gaming PC and other Linux Proton systems.

Easy Anti-Cheat (EAC) seems to be the culprit in breaking Halo MCC on Deck, but not in the way you might think. According to GamingOnLinux, the introduction of a new directory and files that should help get EAC up and running on the platform has actually “broken the game on Linux Proton / Steam Deck.”

GamingOnLinux notes there’s still likely work to be done in getting the anti-cheat software working on the Steam Deck, and there’s thankfully a way to get Halo MCC working again in the meantime. For now, players can delete the ‘easyanticheat’ directory in the installation folder, which should restore functionality to the level it was prior to the update.

While it’s unfortunate that this patch broke Halo MCC on Deck, it’s still great to see developer 343 Industries taking steps towards greater compatibility. Not only would native support allow players to team up with their buddies for co-operative campaigns, but it would unlock the power to jump into competitive Halo on-the-go too.

If, like me, it no longer runs for you.

Delete this directory: "easyanticheat" in the installed folder.

Then you can at least play offline on Linux / Steam Deck like before.

For those impatiently looking to get their Halo-flavoured fix, there are in fact some games from the sci-fi franchise that are officially ‘verified’ or ‘playable’ on the Steam Deck, and one in particular should greatly please RTS fans.