Developers of traditional RTS games must look around at the other genres – the RPGs, the survival games, the platformers – and question why they chose to take on such a turbulent genre. At different points in its history, the RTS has either been inundated with so many great games that it’s been tough to compete, or has endured a dearth of varied and quality titles reflective of a lack of interest in one of the PC’s defining genres. Things have tended to be either really good or really bad, and even though it’s been around for aeons, the RTS has never simply ‘ticked along’ like the others.

Yes, the Total War games have marched unabated across the generations, Company of Heroes tweaked the formula in a more tactical direction, and there’ll always be StarCraft, but only the latter can really be called a traditional RTS of the C&C/WarCraft/Total Annihilation mold. Amalgamation, organisation, and speedy decimation in semi-formations – that’s the old-school strategy way.

Like that of the samurai – if not quite the dodo – the way of the old-school RTS has been largely forgotten. According to the Nexus of Universal Truths (Wikipedia), only 30 RTS games have been released in the last six years, which is the same number as in 2000 alone, and less than in any two successive years between 1996 (the year of Red Alert and the start of classic RTS as we know it) and 2008. It felt like something of a death knell when, in 2013, EA announced that it was cancelling the latest installment in the Command & Conquer series, which had already been sputtering and smoking like a badly damaged Scorpion Tank by that point. 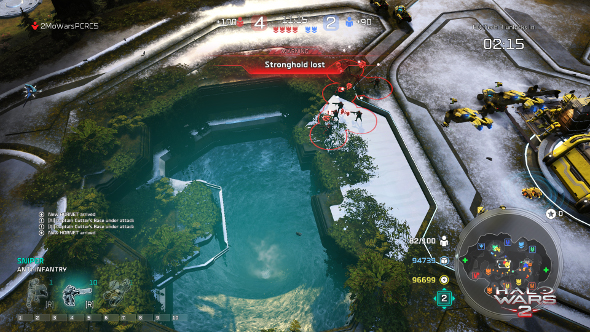 So it’s perfectly possible that Microsoft deemed today’s lack of traditional RTS titles as an opportunity to fill a vacuum with the backing of one of gaming’s most loved franchises. Halo is futuristic, its storied universe is vast and shaped by intergalactic conflicts and – thanks to the original Halo Wars – it already has the marketable reputation as the best-selling console RTS ever released. Why the hell shouldn’t they move their tanks onto the ostensibly undefended PC lawn?

I’d already played Halo Wars 2 back in October, and not too much has changed between then and my latest hands-on with the game. The interface is more responsive this time round; creating control groups with a mouse and keyboard is nice and zippy, making it easier to have some semblance of formation tactics in a game that was erstwhile a tad prone to have you marching around like some undulating blob of destruction – or maybe a couple of slightly smaller blobs. Now, I can at least order my fragile anti-air units to the back of the blob, send my flamies to the front, and tell those quadrupedal walker things to blast enemy bases from afar. There’s not so much order, but a little less chaos at least. However, just because it’s made by Creative Assembly doesn’t make it Total War; it’s meant to feel this way, so you can take your expectations of phalanx formations and methodical generalship and shove them up your toga.

With its extra sheen of visual and mechanical polish, Halo Wars 2 gets a step closer to delivering on that old-school feel that Dan Ayoub seemed to be striving for when he heaped praise on Total Annihilation. This is route one RTS, and the previously unseen third mission that I got to play this time round emphasises that, rather than proffering any notable variants on the formula. 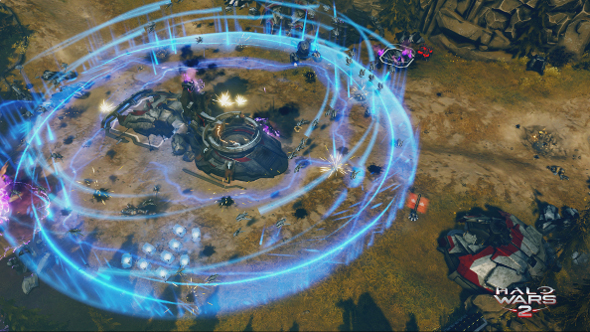 The mission, Ascension, sees you arrive in an area where The Banished, the intriguing new tribal enemy in Halo Wars 2, have been decimated by familiar neutral force, the Sentinels. Despite the narrative twist the mission is a continuation of skirmishing against The Banished, acquiring and holding a trio of control points to build up points faster than them. On normal difficulty, it was more of a blitz than a battle of attrition, and I felt none the wiser about my own actual ability in the game. Based on the three missions I’ve played thus far, the campaign feels like a series of standard capture-point missions wrapped around a promising, canonical story that the devs have already suggested will be relevant to future Halo games.

A sterner and more compelling test came in the multiplayer, which was my first hands-on with a non-Blitz multiplayer mode (here are my thoughts on Blitz – I like it). Playing my first multiplayer deathmatch alongside Creative Assembly QA Technician Ben Leech was, admittedly, a major advantage, especially when my ill-advised first attack on an enemy base wiped out most of my army, and he swooped in to save me from their counter-attack (though I deserve a dab of credit for at least having the strategic sense to spend my one remaining leader point on a deadly God-beam that helped stave off my assailants).

It’s here that I started actually figuring out what kind of Halo Wars 2 player I was. While Ben took over the energy nodes around the battlefield, I captured a central base on the map and dug in – bolstering its defences, setting up a rally point by a base in a safer part of the map, and upgrading every little wotsit and doodad in my force. I amassed my army while my better half harried the enemy with ambushes and hit-and-runs, offering vital support when the enemy went for my lightly manned but solid central bastion. 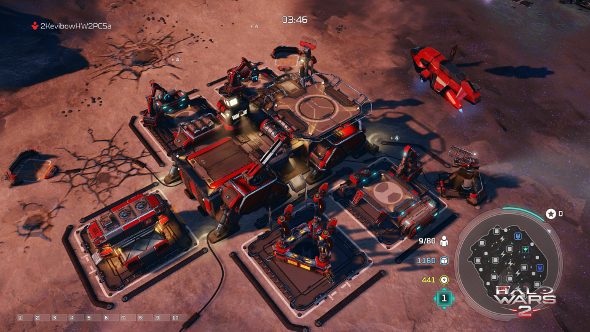 Ben pointed out that by focusing on amassing a huge, fully upgraded force before my next attack, I was playing like a Boomer – a term I hadn’t heard since the Age of Empires days. “Yep, that’s me all over. Classic Boomer”, I replied, not forgetting that I was only playing this way because my rushing tactic went so disastrously.

With my probably unbalanced but massive and high-tech military behemoth set, I made for the nearest teleport, which zapped me to a completely different corner of the map than I had anticipated. But like all the great military commanders of yore, I adapted, and with my mindless mass of an army, I stormed the poorly defended core enemy base that I happened to find myself next to. The battle became a clean-up job from that point on.

Aside from the card-based Blitz mode, Halo Wars 2 looks like it wants to keep things simple. It’s kind of ironic that, in keeping with its made-for-console DNA, it actually harks back to the golden age of RTS more than most games of recent years, and it feels like it wants to accommodate both Halo fans (thanks to a good story conveyed through those lovely Blur cutscenes) and PC traditionalists.

But here’s the thing. While Halo Wars 2 could easily have laid claim to a patch of PC turf for itself even just 18 months ago (with the blessing of RTS Baron Starcraft 2, of course), it’s set to come out at a time when old-school real-time strategists actually have several good options. Alongside the eternally dominant Starcraft 2, there is last year’s Grey Goo, which lacks the branding of a major franchise but embellishes its old-school mechanics with some interesting modern ideas. Then, of course, there is the upcoming Dawn of War III, which is moving away from the Company of Heroes-inspired, squaddie feel of its predecessors, towards a more conventional and large-scale RTS form.

That’s some tough competition, and in both games there’s a tactical depth that I’m yet to experience in Halo Wars 2. Elevation, foliage, ambushes, and weird amorphous blobs that act as moving bases are just some of the strategic hooks that make its rivals look quite tantalising, and would threaten to make this look a little facile.

But Halo Wars 2 has its own hook. Its fast-paced arena-like maps and deceptively deep Blitz mode make it feel decidedly more sporty than its competitors. Perhaps the target audience here isn’t so much the RTS veterans, but a generation of gamers to whom “CHA-CHING!” means nothing, who remember Command & Conquer as ‘that game that was cancelled’ rather than the game that spawned the RTS, and who think that when you’re talking about Total Annihilation you actually mean Planetary Annihilation. 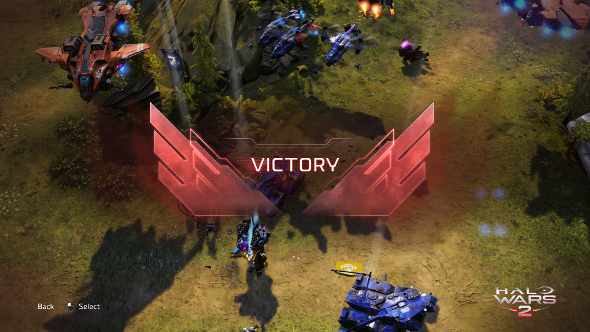 Maybe Halo Wars 2 isn’t actually old-school, but in fact very, very new-school, aimed at offering players a package where you can have a five-minute quick-fix or an entire campaign set in a rich universe that millions are familiar with.

And maybe I’m just a stick in the mud, thinking that for all its undeniable polish, presentation and cornucopia of modes, Halo Wars 2 feels like a console game at heart. A well-ported console game, but designed within the restrictions of gamepad-friendliness. It has a fight on its hands to make a mark during a mini-resurgence of dedicated old-school RTSes, but the fact that we’re even seeing such a fight in this most volatile of genres is great news for PC gamers.