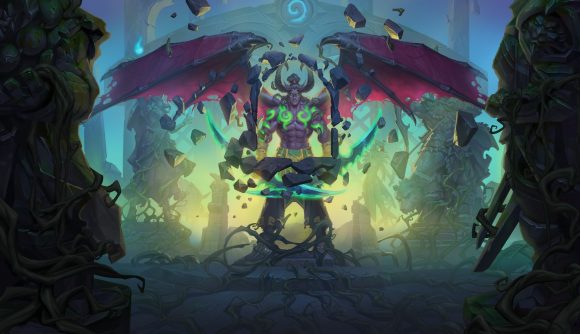 Every four months or so, Blizzard drops a whole new expansion into the world of Hearthstone, and this time we’re delving into Ashes of Outland. This expansion may be one of the biggest that Hearthstone players have ever seen. It focuses on the gloomy Outlands, a hellish place reserved for the baddest of badasses, originally featured in World of Warcraft’s The Burning Crusade.

First of all, let’s talk about Ashes of Outland’s main attraction, Illidan Stormrage. The Lord of the Outland is going to be the focus of the beginning of Hearthstone’s Year of the Phoenix and it’s not just because he’s purple and glowing green – although that is pretty cool.

He will represent a new class, the Demon Hunter, and it looks like the first expansion is really going to be all about him and his purgatory pals, who will come in the form of new cards. Demon Hunter, in particular, will receive more cards than the other classes in the Ashes of Outland expansion due to its lack of backlog. However, it won’t be getting Primes.

Primes are the cards you should be looking out for in the classic classes. These cards are good by themselves, but after being destroyed will reshuffle back into your deck as a more powerful version of itself. A slower mechanic, for sure, but one that could produce insane results.

The other bid card type we’re going to see is imprisoned demons – cards you’ll play that will awaken a couple of turns later. These are again slow but don’t underestimate them because if you can’t come up with a plan to stop the minions once they’re awake, they can be unstoppable.

Oh, and who doesn’t like a free legendary coming their way? Players who log in from March 17 will receive Ashes of Outland’s first legendary card Kael’thas Sunstrider. Isn’t that nice?

Those are all the base details for the upcoming Hearthstone expansion but there is way more content arriving very shortly. Here’s everything coming to Hearthstone in the Year of the Phoenix.