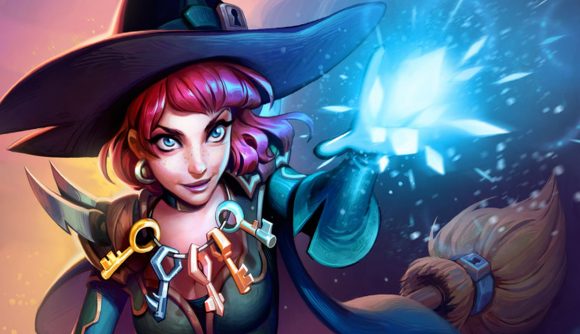 Hearthstone is getting an all-new type of expansion tomorrow – a teeny weeny one called a “mini-set”, which drops some new bits and pieces into the card game’s previous Madness at the Darkmoon Faire expansion. Called the Darkmoon Races mini-set, the new Hearthstone content drop brings a bunch of cards of the legendary, rare, common, and epic varieties.

The breakdown of new goodies in Hearthstone’s first ever mini-set is as follows: “four legendary cards, one epic card (x2), 14 rare cards (x2), and 16 common cards (x2)”, all of which can be obtained via Madness at the Darkmoon Faire card packs, as Blizzard explains. Additionally, for the first time since the dawn of Hearthstone, the whole 66-card set will be available to buy from either the in-game shop or web store. It’ll set you back $14.99 or 2000 gold, mind, but you can always try to catch ’em all through playing the game instead if you prefer.

The Darkmoon Races mini-set features four legendary minions, of which three are “legendary racers that each hearken back to an expansion in the Year of the Phoenix” – that is, the Keywarden Ivory, Dark Inquisitor Xanesh, and Envoy Rustwix.

As for the rest of the cards featured in the mini expansion, you can find a (nearly) full list on the game’s site – some are a mystery, so looks like you’ll have to play to find a few out.

Come one, come all, to the fastest most dangerous competition in Azeroth: The Darkmoon Races, launching January 21!

All 35 Darkmoon Races Mini-Set cards will be obtainable through Darkmoon Faire Packs, or in the Shop as a full set for $14.99 / 2000 Gold! pic.twitter.com/QiYKBKxdYT

In the announcement post, Blizzard adds that there are some mechanics from days of Hearthstone gone by – that is, “creeping Corruption, Dormant dangers, Spellburst racers, and more Dual-Class flavours” – making a comeback, so keep an eye out in-game for those.

The Darkmoon Races mini-set launches worldwide tomorrow, January 21. While you wait, check out our sister site The Loadout’s rundown of the best Hearthstone decks for some tips.