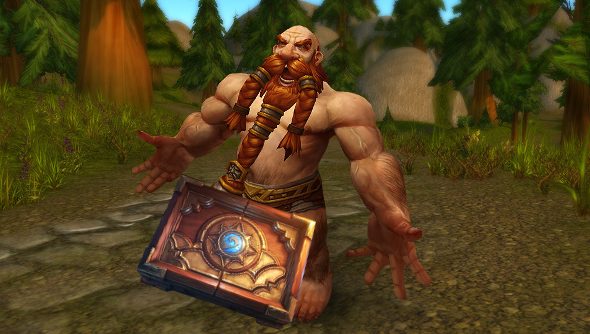 Update: It appears that Tavern Brawls are free to enter, and will award classic packs too!

Look, we’re all thinking it, but nobody wants to actually voice our prejudices. I’ll take the bullet. I bet it was the Dwarves that started it. I know, I know. It’s a horrible stereotype and Dwarves are more than drunk brawlers. But I can say that, because I am short, hairy and Scottish. I’m basically a Dwarf myself. So it’s okay.

Anyway! What is Tavern Brawl? It’s a new mode coming to Hearthstone, and it’s what Blizzard was teasing with a short clip of a new button appearing in the main menu a couple of days ago. And it’s egalitarian: you don’t need to be a Dwarf to play.

Update:You won’t need to spend gold or real money to participate in Tavern Brawls; there’s also no limit to the amount of times you can play. Additionally, players who win a Tarven Brawl each week will find themselves with a free Classic Pack, at least for the first few brawls after patch 2.7 goes live. This seemingly gives players a much needed way to earn the old classic packs without being forced to spend their hard earned gold, which is much better spent on arenas.

@krevan2 Tavern Brawl is free. You earn a free Classic card pack when you win your first game of the week in the first several brawls.

The new mode’s a wee bit like Arena. Players will be set against each other in head-to-head battles employing special rules that influence decks.

Here’s an example from Blizzard: “One week might feature preset decks, while another week could have you crafting a brand new Tavern Brawl deck following specific guidelines, while others might offer buffs to specific minion types—who knows!”

Anyone who is level 20 and above will be able to get into a drunken fight.

Tavern Brawl will kick off in mid-June.

Also heading to Hearthstone are new heroes, the first of which is Magni Bronzebeard, who was revealed last week. Two more heroes, at least, will join him. And if you’re sick of your card backs, Blizzard’s adding more custom backs that can be assigned to specific decks from the Collection Manager.

This is all coming in patch 2.7, which Blizzard’s saying will come soon.