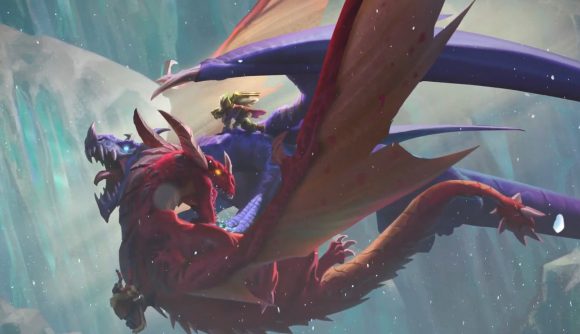 The next expansion for Blizzard’s CCG Hearthstone has been announced. Hearthstone will be getting yet another expansion, Descent of Dragons, which will be coming to the game to fully make good on the Year of the Dragon. The new expansion follow up the stories of the previous two sets, and comes our way with an 80s-style power ballad announcing its existence. Descent of Dragons launches on December 10, and pre-purchases are live today.

Our new keyword this time around is Invoke. This lets you upgrade cards to more powerful versions. Galakrond, for example, will evolve through three different forms as you make use of Invoke – and all players will get their own copies of Galakrond, too.

Hearthstone expansions are expected every four months or so. Each expansion new metas and playstyles evolve, transforming the game, so although expansions are common, they’re all equally important. With the last expansion Saviors of Uldum, players saw the revival of the quest mechanic and a surge in Shaman decks.

Check out the announce trailer below.

Hearthstone has been recently embroiled in the Blitzchung and Hong Kong controversy, something that was immediately addressed by and apologised for by Blizzard CEO J. Allen Brack at Blizzcon’s opening ceremony.