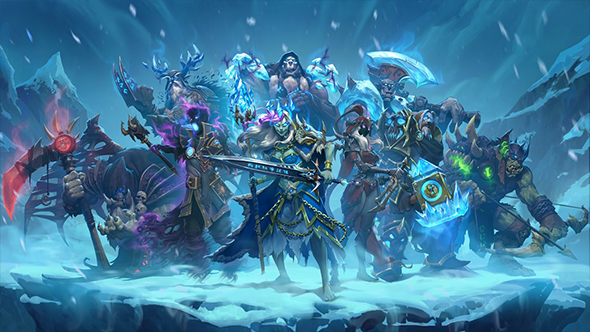 The Death Knight hero cards introduced in Hearthstone’s Knights of the Frozen Throne expansion have proven a powerful addition to the game, particularly in the random setting of the Arena where it’s near-impossible to build solid counters to these legendary cards. Blizzard have taken that criticism to heart, and it seems these hero cards will soon be pulled from Arena play.

Find out everything you need to know about Hearthstone’s upcoming Dungeon Run mode.

According to a post on the Battle.net forums, November 14 (at a time Blizzard vaguely label as “morning PST”) will be your last opportunity to draft these cards for your Arena deck. Existing decks already using the Death Knight heroes will continue to have them after the change.

“While the Death Knight Hero Cards are exciting and powerful to play,” say Blizzard, “their permanent Hero Power upgrades are hard to combat in a format where answers are limited.”

Blizzard also say they’re continuing to make changes and rebalance the Arena all the time. At BlizzCon, they said they want to make sure that all heroes are seeing equal play in the Arena, and it wasn’t that long ago that they pulled the controversial synergy system from the game. Don’t expect the changes to slow down anytime soon.