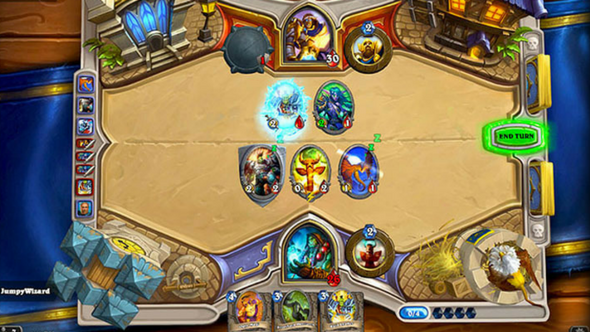 Hearthstone’s Arena mode is one of its primary ways to play, but it’s a style that frequently gets shaken up with new rules variations and events, and it’s not always possible to hop into a traditional match when there’s an event going on.

Dive into Hearthstone with the best decks for beginners.

“I think with Arena we’re trying to always find new ways to make interesting for players,” says senior producer Eric Del Priore. “After Dual Class completes we will go back to the Arena you know and hopefully love from beforehand and we’re going to continue to make card tweaks there. We’ll try new and interesting things with Arena going forward as well, but we don’t have anything specific to share yet there.”

Hearthstone director Ben Brode had much the same philosophy to share. “The philosophy for Arena – and I think the game in general – is that change is fun. You play something so many times, then you’re ready for something new. That’s why we release new cards, and new modes, and new Tavern Brawls, and all that. So I think there are opportunities for the Arena. Obviously this Dual Class thing was, I think, awesome, a really cool shakeup. So I there are opportunities to do things like that in the future.”

Not all of those opportunities have turned out for the best. Synergy was recently pulled from Arena mode after some significant negative feedback. “We were excited about that initially but the community feedback wasn’t that great overall,” says Brode, “though some people liked it. But we’ve backed off on that and we’re trying other things. I think there’s a lot of room to improve on the Arena, so internally we’ve been trying a lot of things. A lot of them haven’t panned out very well, so we’ve gone back to the drawing board a couple of times.”

But as far as changes to the Arena go, the team believes not everything is meant to stay forever. Brode says “some of those might be fun for a week, but not forever. There’s just different opportunities. If we find something that’s that category maybe we’ll turn it into some kind of event, and if we find something that just improves – whether it’s an event or the core experience – we’ll try that as well.”

Ultimately, however, Brode says the goal is balance, particularly when it comes to seeing every class getting equal play in Arena. “The more balanced it is, the more different stuff you’ll see. If we tweak up or down the card drop rates or balance some cards that’ll have an effect, and you’re not just seeing Mage every game, you’ll see all nine classes hopefully more equally. That’s one we’ve been working on from a lot of different points, whether by the way we design cards or rarities, or skews of different rarities, or individual card drop rates.”

{"schema":{"page":{"content":{"headline":"The Hearthstone devs want to make sure every class sees equal play in the Arena","type":"news","category":"hearthstone-heroes-of-warcraft"},"user":{"loginstatus":false},"game":{"publisher":"Blizzard Entertainment","genre":"Free to Play","title":"Hearthstone","genres":["Free to Play"]}}}}