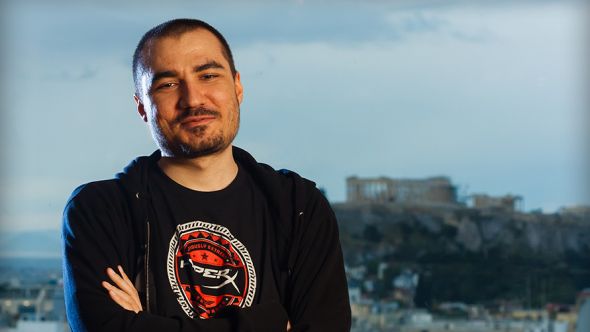 If you’re familiar with the Hearthstone community, you may know about Octavian ‘Kripparrian’ Morosan’s Button (I use the uppercase advisedly). That’s the ‘disenchant’ button that would dust his spare card collection, which he’s been building for the last three years. It’s been a talking point for months now, and over the weekend, he finally pressed it.

Excess of dust of your own? Why not craft something from the Journey to Un’Goro expansion?

Some brief context: In Hearthstone, scrapping unneeded cards returns arcane dust, which you can use to craft new ones. Kripp, a prominent Twitch streamer and pro player for Team SoloMid, had planned to Press The Button when it would return enough dust to craft a full golden set of every card in the game, but after the game’s many expansions added a ton of new cards, he revised this goal downward.

His new goal, which he achieved last week, was to craft a full Standard set (Kripp plays in Arena mode, which uses only Standard cards), and to hit a million followers on Twitch. Here’s the moment when The Button was finally pressed (skip ahead to 2:25):

Bit of an anticlimax, no? Kripp’s client crashed under the sheer weight of the disenchantment, with the visual effects that should’ve accompanied it. Reddit was underwhelmed, to say the least.

To compensate his viewers, who were expecting some fireworks, Kripp bought a single card pack and disenchanted its contents. He invites viewers “with some video editing skills” to link the pressing of The Button with the dusting of this one card pack, and Reddit user kangouhou stepped up in a big way:

We have to say, it’s a bloody impressive piece of editing. Somehow kangouhou has made it look as though the disenchantment of Kripp’s entire original collection went through successfully. “Kripp recorded a ‘one pack’ disenchant and I combined a lot of these to make the big disenchant happen,” he says.

His efforts have been appropriately commended, with CleverFrog saying “my life is complete thanks to you,” andSynTech-X declaring “I can die in peace now.”

An amusing footnote: the event has drawn conspiracy theorists who’ve assumed Blizzard somehow sabotaged the fireworks. That may be because game director Ben Brode has spoken about Kripp’s massive collection before, forecasting the end of the entire game if he ever Pressed The Button.

And don’t worry – when Kripp loaded the game back up, he had all the dust he should’ve.