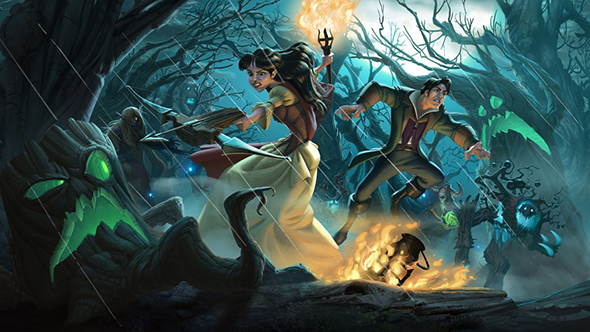 Blizzard promised that Witchwood’s new single-player mode would be out on April 26, and lo – here it is April 26, and the mode’s just gone live. Monster Hunt is ready for action, following up on Dungeon Run with a new set of challenges to conquer and rewards to earn.

Refine your old strategies with our Dungeron Run guide.

Monster Hunt brings an array of new heroes and unique cards for use in the mode, which should help to shake things up compared with the traditional game types. Special quests completed along the way will also net you new Witchwood card packs, but those bonuses will only last through July 26.

Original story, April 19:Hearthstone’sThe Witchwood expansion launched last week, but unlike Kobolds & Catacombs before it the new single-player mode has been somewhat delayed in arrival. But Monster Hunt is coming, and quite soon now – Blizzard have confirmed the mode will launch on April 26.

They also provided some new detail on the mode courtesy of a Hearthside Chat with lead mission designer Dave Kosak. Monster Hunt builds on the previous Dungeon Run mode, casting you as a hero taking on a random series of boss monsters. Each victory gives you new treasures, letting you build a stronger deck as you go.

This time, though, you select from a set of custom monster hunters. These are based on existing hero classes, but have their own unique hero powers, putting a new spin on how you play with existing cards. Tess Greymane, for example, has a power called Scavenge, which lets discover a cast spell and add it to your hand.

You can get far more details on the new mode through the video above. If it meets the lofty standards that Dungeon Run has accustomed us to, it should make for an excellent addition.