World of Warcraft players know The Scholomance as one of the game’s classic dungeons – a school for prospective necromancers of the undead Scourge, located beneath an island at the centre of a beautiful lake. It’s a striking setting with an equally striking history.

For once upon a time, it was a palatial manor estate, home to the wealthy House Barov and to one of the most prestigious schools of magic in all of Azeroth. Its corruption reflects, in microcosm, that of Lordaeron – the kingdom of which it is a part – in that both were engineered by the mage-turned-lich Kel’Thuzad, perhaps Warcraft’s most nefarious villain.

Fans will thus be thrilled to learn that the next expansion for Hearthstone, the Warcraft card game, will explore this legendary school of magic before Kel’Thuzad revealed his true allegiance and turned it into a school of necromancy. Scholomance thick with meaning for Warcraft fans, but to others, too: in this era of Harry Potter, who hasn’t wanted to go to a school of magic?

For that’s exactly the promise that the Scholomance Academy expansion is making. “If you played World of Warcraft, you remember Scholomance as this haunted, broken-down school, this dungeon filled with undead, this lair of necromancy,” principal narrative designer Dave Kosak tells us. “We wanted to envision what this school would’ve been like in its prime. What made it the premiere magical academy in Azeroth? What would it have been like to go there? What would the students and faculty have been like?” 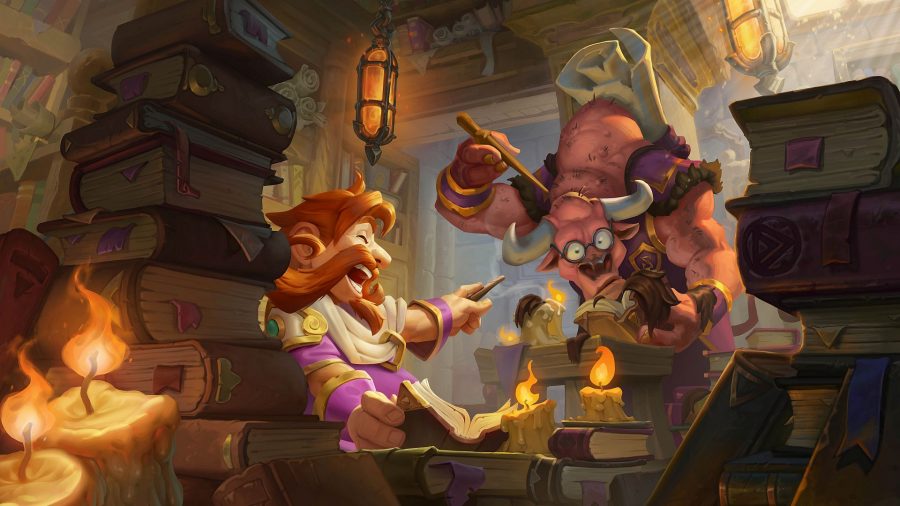 It’s fair to say that the CCG, as a genre, doesn’t lend itself to storytelling quite as well as, say, an RPG – natural devices such as dialogues, characters, cinematics and so on sit less well alongside drafting and playing cards on a board than in games with more naturalistic interactions – but it’s also fair to say that Hearthstone has pushed these intrinsic limits further than most of its peers. Nonetheless, I do wonder how Blizzard intends to do justice to a fantasy as rich as attending a school of magic, vaguely remembering the Harry Potter movie tie-ins which, while mostly mediocre, did a decent job of realising the enchanting – and enchanted – atmosphere of Hogwarts Castle and all its arcane little secrets.

Fancy a look? Check out the best Hearthstone decks for beginners

“Yeah, our team had a lot of fun with our initial explorations for this one. We took a look at what the instance looked like in World of Warcraft and then tried to visualise it back in time,” Kosak explains. Because it wouldn’t be much of an expansion if any of Hearthstone’s traditionally thaumaturgically challenged classes were excluded, every class gets an occult education. “So our team drew up all the different training rooms, like here’s where the paladins and priests would study, here’s where the hunters would study, here’s where the warriors are dueling in the courtyard, and created a space that felt like a university campus.” 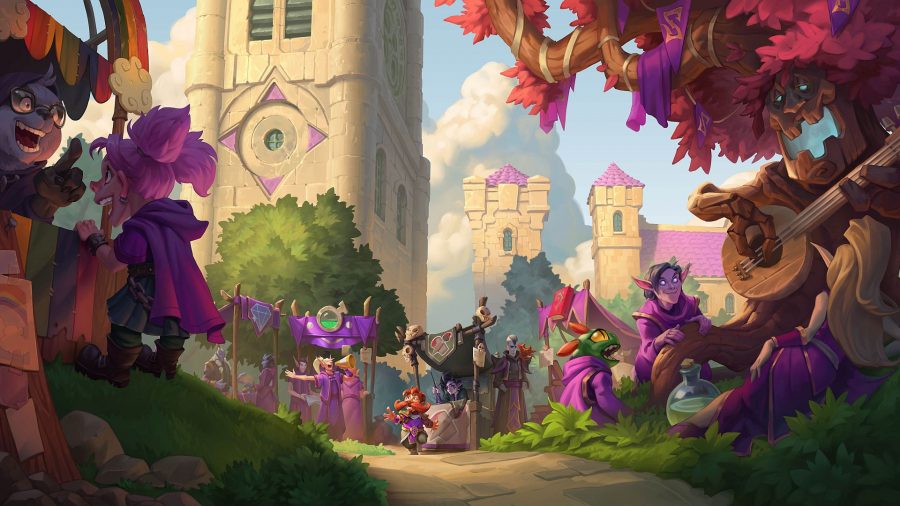 But of course, we know that this idyll cannot last. “The player knows that Kel’Thuzad will become a Lich and that Scholomance will fall into ruin, so we get to hint at how that might happen,” Kosak says. “You mentioned secrets and I’m really glad you did. There’s stuff going on in the basement of Scholomance – there’s the secret, forbidden parts of the library. There are student groups that are forming evil cults. There’s all kinds of things that we can hint at the future of the school in a way that players will look at it and say, ‘ah, I know what’s gonna happen next!’ You can see it in the individual cards, in the art and the voiceover lines, and everything we do.”

The player knows Kel'Thuzad becomes a Lich and Scholomance falls into ruin, so we get to hint at how that might happen

The premise raises some exciting questions for set design, too. Not only do we get to find out what happens when a warrior tries to cast spells, the design team has been inspired by the US university system to add a ‘double major’ feature. That’s right: Hearthstone is introducing dual classing.

“These are cards that exist in two classes,” as set design lead Alec Dawson succinctly puts it. “So classes have more access to cards and they ever did before – [of the new expansion] they have access to 14 different cards and three legendaries. So it creates a lot of new synergies between the classes. It’s awesome for deck-building possibilities as well.” The ubiquity of magic has also inspired the new keyword: Spellburst, which triggers a one-time effect after you play a spell. “So you play a minion, and you cast a spell, and you get this one-time, nice burst of an effect.” 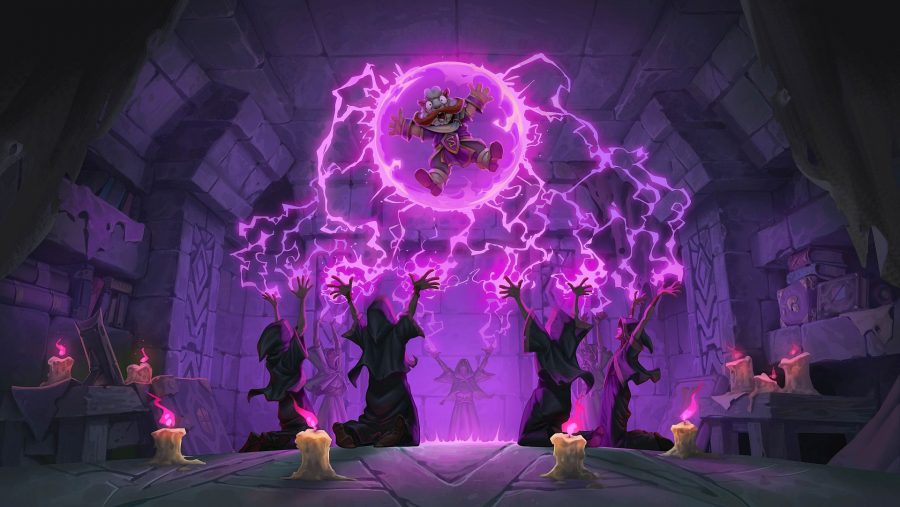 This seems like a pretty broad mechanic to me, and I press Dawson for an example of a cool or characterful play that it could set up. “With Spellburst in particular, sometimes it cares about the spell you play. If you see Diligent Notetaker [Shaman, 2 Mana, 2/3, Spellburst: Return the spell to your hand], that’s a card that, depending on which spell I’m going to use with this, can change my game plan entirely. Say I want to pair it with Lightning Bloom, one of the new dual-class cards [Shaman/Druid, 0 Mana, gain 2 Mana crystals this turn only, Overload: 2], that can ramp into one turn, and then you have to innovate later on as well. Or if I’m playing a control match-up I can wait, use it with something like Hex, when I know I’m gonna need a bit more value later in the game.

Related: Check out the best card games on PC in 2020

“There are also Spellburst cards which, on the other end, just do an effect as well, like Wretched Tutor [Neutral, 2/5, 4 Mana, Spellburst: Deal 2 damage to all other minions]. I think these cards are going to lead you down a different path of including more spells in your deck to activate some of these effects. Spellburst is interesting because, yes, you can do it in one turn if you combo the minion out and then you play the spell right afterwards, but you can also just play the minion and wait, sort of set yourself up for the future and give your opponent something to interact with there. I think that’s when Spellburst really shines – when you know it’s not always immediate. Sometimes I’m waiting, planning to do something big on my turn coming up – if you let me!”