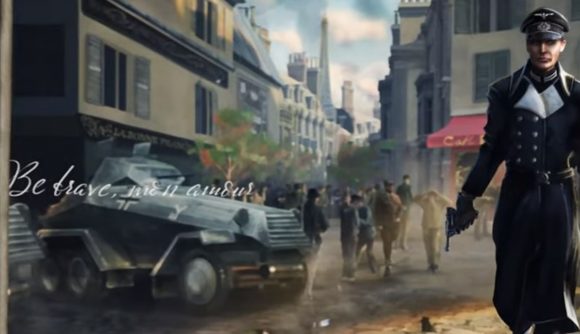 Surprising probably no one, grand strategy specialist Paradox has announced another expansion for Hearts of Iron IV at its annual jamboree, PDX Con. It’s called La Resistance, it doesn’t yet have a release date, and it’s all about espionage and local resistance movements.

Espionage has a new gameplay layer, the intelligence agency (Great Britain has the SIS, for instance). You can keep your intelligence-gathering simple with just a few defensive spies, or invest more, upgrading your intel branches or developing new ones. These might include a cryptology department, which is inspired by Alan Turing’s work on the German enigma code at Bletchley Park. Crack the enemy’s codes, and you get to choose when to deploy a hugely powerful passive buff, but the enemy will notice and change their codes after 30 days.

You’ll also be able to develop networks of spies in hostile territory, and certain actions have been folded into this system. Coups, for instance, are now spy operations, and can be more precisely targeted as well as defended against – operatives can be captured by the enemy and will likely leak information under torture (but you can give them suicide pills to defend against this risk).

With this focus on internal dissent rather than grand nationmaking schemes, Hearts of Iron IV is able to more faithfully depict conflicts such as the Spanish Civil War and the differences between Nazi-occupied (Vichy) France and Free France.

Spain gets two of the biggest focus trees in the game to depict either the Nationalists or Republicans in its Civil War. That war is inevitable – it /will/ break out – but it’ll be different each time you play according to how you prepare. Each side can spend political capital to claim certain territories or make strategic plays with major impacts on the coming conflict. The war also lasts much longer now, so you’ll see foreign powers getting involved.

There are new alternate history focus trees – always a fan-favourite – including the option for you to play a descendent of Napoleon and take revenge on the British for the Battle of Waterloo. Wish fulfilment is cute.