So you want to know how to use nukes in Hearts of Iron 4? As the conflict that brought nuclear armaments to the world stage, it makes sense that these fearsome weapons are present in Paradox’s popular strategy game.

But how do you get them? How are they used? We’ve put together a quick guide for you so you know what you need to do to wield the destructive power of nukes. It’s worth noting though that, despite being a very serious thing, Hearts of Iron IV’s implementation of nukes leaves much to be desired. We’ll go over this in more detail towards the end, but for now let’s look at what you need to know about building up your nuclear armaments.

To start with, you will need to progress down the short but slow Atomic Research branch in the Engineering research section. There are only three steps, but these steps are spread across a five year period. Hearts of Iron IV heavily penalises the player when trying to research a technology earlier than the year the game places that technology, so it’s rarely worth trying to start before then. This means you’ll have to wait until 1945 before you can start using nukes, unless you manage to get some specific research buffs.

The first tech – Atomic Research – is available in 1940 and gives you a +4% research speed bonus. Then you need to research Nuclear Reactor, which is available in 1943. This unlocks the nuclear reactor as a new state-level building, which you can build to provide your nation with enriched uranium, though you can’t do anything with it just yet.

In 1945 you can finally research Nuclear Bombs, enabling you to produce and stockpile nuclear weapons. Each nuclear reactor your nation possesses produces one nuke per year. 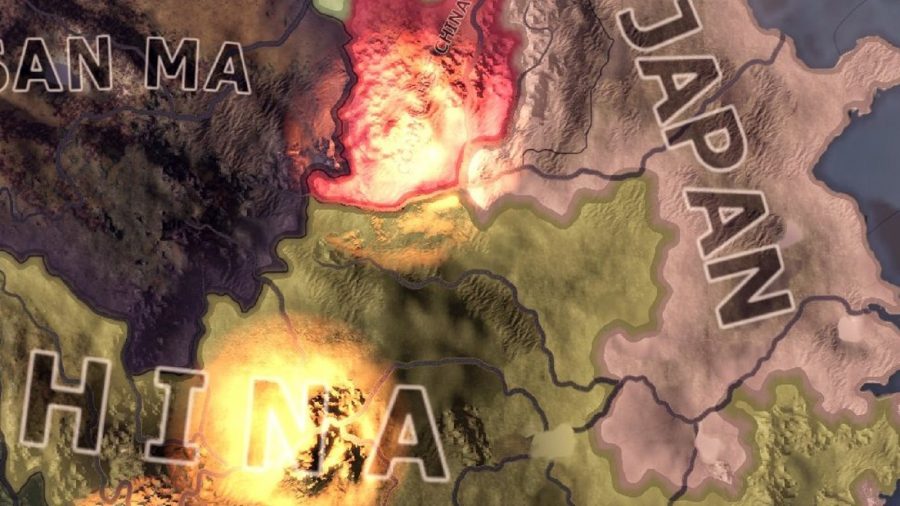 How to use nukes in Hearts of Iron 4

In order to deploy a nuke in Hearts of Iron IV, ensure you meet the following criteria:

You can only drop one bomb per province, but multiple provinces can be bombarded simultaneously. It will take 12 hours from the moment you launch the nuke for it to be dropped; you’ll then see a giant mushroom cloud emerge from the target province. 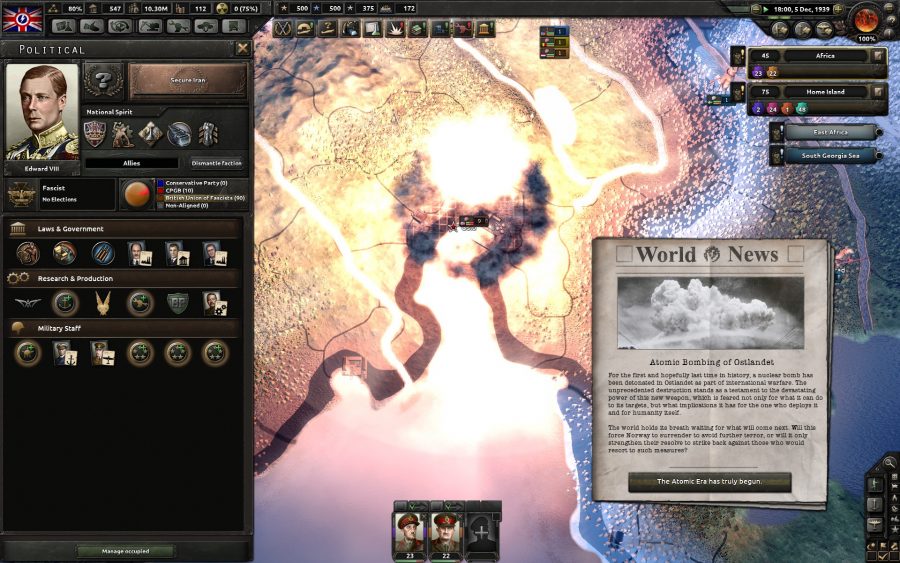 Nuclear weapons in Hearts of Iron 4 are a bit of an underdeveloped feature right now. They’re potent up to a point, but don’t really justify the cost of researching them nor the effort in deploying them.

Depending on where the nukes are used, flavour text may also be triggered. Provided certain conditions are in play, Japan can surrender after a nuclear attack, as part of a special decision, reflecting the historical events of WWII.

Related: Why Hearts of Iron IV Kaiserreich is the ultimate sandbox

Overall though, nuclear weapons are disappointing. While they had potential for breaking deadlocks or destroying specific forces, the current Hearts of Iron 4 meta discourages grouping large amounts of units in one province due to supply issues. You may be able to damage some forces, but the enemy is likely to have plenty more to react to any breakthroughs.

The use of nukes is not as effective in terms of war support and capitulation as it looks, either. Regardless of how many you use, an enemy nation isn’t likely to capitulate that much earlier than they would have anyway, especially if you can’t conquer much territory. The use of nukes isn’t really treated with the seriousness it should be, and you will find many anecdotal examples online of the AI dropping nukes as regularly as they would normal bombs, and it having very little impact on the target nation.

As an example, in one playthrough, we found that even after destroying the UK with nuclear bombs, the Allies overall refused to surrender, though UK did capitulate eventually. So because the long-term effects of nuclear weapons aren’t really represented in Hearts of Iron 4, and the effect on national morale isn’t as strong as it needs to be, nukes are one feature we’d recommend avoiding, unless you’re really curious.

And there you go, everything you need to know about nukes in Hearts of Iron IV. Check out what changed in the recent No Step Back expansion, as well as our guide to changes to Hearts of Iron 4’s supply system. There are also some great Hearts of Iron 4 mods worth checking out, as well.