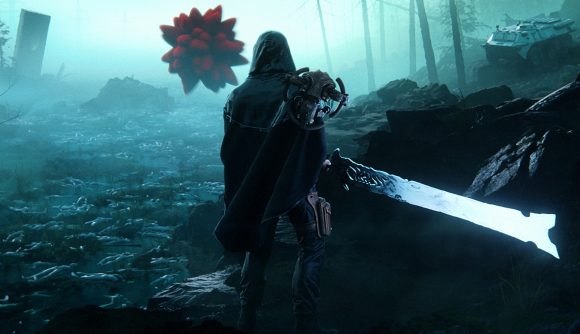 The new game from one of the lead developers behind Deus Ex: Human Revolution is confirmed by the Hell is Us reveal trailer, and it’s a creepy action-adventure game that seems like a mix of Death Stranding and Elden Ring.

Hell is Us is the latest game from Rogue Factor, the developer of Warhammer strategy games Necromunda: Underhive Wars and Mordheim: City of the Damned – but this one sounds very different. Hell is Us is led by Jonathan Jacques-Belletête, who previously worked at Eidos Montreal and was the art director of Deus Ex: Human Revolution – which had a distinct style, to say the least.

Hell is Us is described as a “semi-open world” third-person action-adventure game set in a country undergoing both a civil war and the invasion of supernatural creatures that resemble various headstones and monuments in the area. The protagonist is armed with special weapons to defeat “the Calamity”, as it’s called, which – going off of what the trailer reveals – includes a drone and a massive Final Fantasy-style greatsword.

While the press release describes Hell is Us as “a new genre”, it states that players will have to explore the environment to discover everything without the aid of waypoints and guides – which sounds a lot like Elden Ring, although the trailer has the disturbing, otherworldly feel of Death Stranding.

“Our goal with Hell is Us is to bring back true adventure and exploration,” Jonathan Jacques-Belletête explains. “There’s no need for a detailed quest log or precise waypoint on the map. We want players to feel the thrill of adventure, guided by their feelings and instincts.”

Explore the dark side of human nature as you face a mysterious calamity in #HELLisUS, an action-adventure game developed by @TheRogueFactor.

Hell is Us is due to release in 2023, and is down for a PC release on both Steam and Epic Games Store.