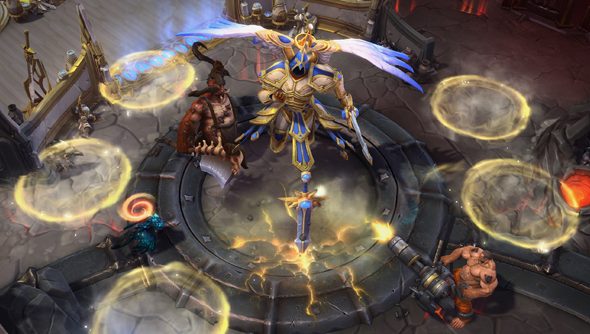 For the last couple of months, Heroes of the Storm has been possessed. A Diablo-dedicated takeover dubbed Eternal Conflict is now in its final throes. Two hellish battlegrounds and four familiar heroes are left in its wake – each up to half a year in the making.

The immediate future finds Blizzard pulling from both WoW and StarCraft, in beastmaster Rexxar, the terran Medic, and prime protoss Artanis. But beyond that, there are no public plans for how the game will evolve. Can we expect more themed splurges like Conflict? What’s the new normal for Heroes of the Storm?

For director Dustin Browder and lead producer Kaeo Milker, Eternal Conflict was a “big experiment”. Until then, the backdrop for every match of Heroes had been neutral ground – a map like Blackheart’s Bay or Haunted Mines, designed specifically for the abstracted realm of the Nexus. By contrast, Battlefield of Eternity and Infernal Shrines are graffitied with Diablo lore – and new heroes Johanna, Leoric, Kharazim and the Butcher a quadruple-whammy of action-RPG fan service.

Blizzard have had fun diverting Heroes down a particular alley of the company’s past, but there’s a question: “How much is the variety part of the fun?”

“We were a little concerned that was maybe too much Diablo,” says Milker. “Because one of the values of this game is about variety – it’s all these game worlds, the diversity of all the stuff coming in.”

Largely, the dev team feel that Eternal Conflict has been great for the game – but have now returned to the mode of working they occupied before the angels landed. Themed updates will be the exception, and surprise picks from the Blizzard character canon the norm.

“I think we want to compare that experience with the Diablo experience,” muses Browder. “And get a sense for, in the future when we do one of those themes, how long should it go on for?”

Designers need variety too, of course. Browder is excited to see how the MOBA’s fluctuating metagame reacts to the introduction of Rexxar and Artanis, each with rulesets sourced from different universes: “So maybe I’m okay with Eternal Conflict coming to a close about this time.” 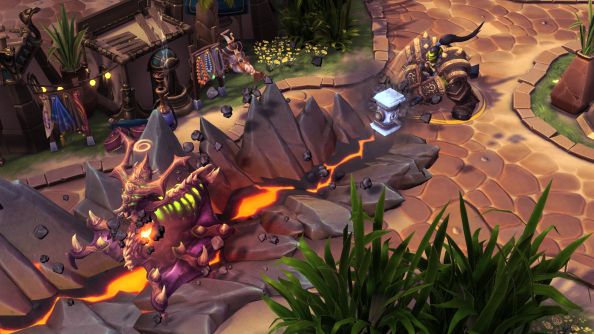 They must, I suggest, be eyeing up the colourful cast of team FPS Overwatch. But it turns out there’s an impediment there – politeness.

“We have an agreement with the teams inside Blizzard that we won’t use their heroes until they’re done with them,” Browder explains. “That we won’t sneakily grab their heroes and just run off with them before they have a chance to launch their games.”

He admits though, with a laugh, that when it comes to new heroes his team “end up asking for forgiveness more than permission”.

“We have had some license because the Nexus is this weird place,” notes Milker. “We’re kind of allowed to reinterpret things and do crazy things. And if the end of the day if we go in a weird direction and [other teams] go in a different direction, that’s okay. We get to have a good time with that.”

Every Blizzard staffer I chat to at Gamescom raves about some aspect or other of Heroes of the Storm. And Browder and Milker have noticed more more of their colleagues playing the game around the office. It was the top brass of StarCraft who asked for Artanis’ adaptation ahead of Legacy of the Void. 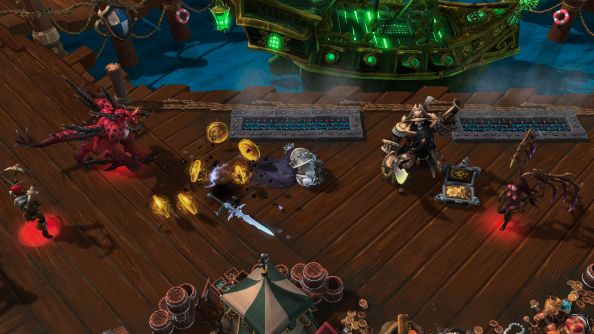 Artanis’ Heroes incarnation will be free with every version of the RTS expansion – and arrive sooner. But the MOBA team aren’t looking to explicitly support every big release in the Blizzard calendar with a hero or battleground.

“We feel like, when there’s a big thing happening in a game or a new expansion, let’s all go play that game,” says Milker. “It feels better to us in theory right now to come out with something ahead of that game, that’s like the prelude to it, or come afterwards with something that celebrates it.”

Now that Browder, Milker and team have built bridges within Blizzard, they’re starting to see crossover in the opposite direction. Since a recent update, Diablo III witch doctors have been able to summon the Wall of Zombies first raised by Nazeebo in Heroes of the Storm.

“It’s really cool how we’re cross-pollinating now,” says Milker. “Everybody is just getting excited about each others’ games and incorporating cool things from them.”